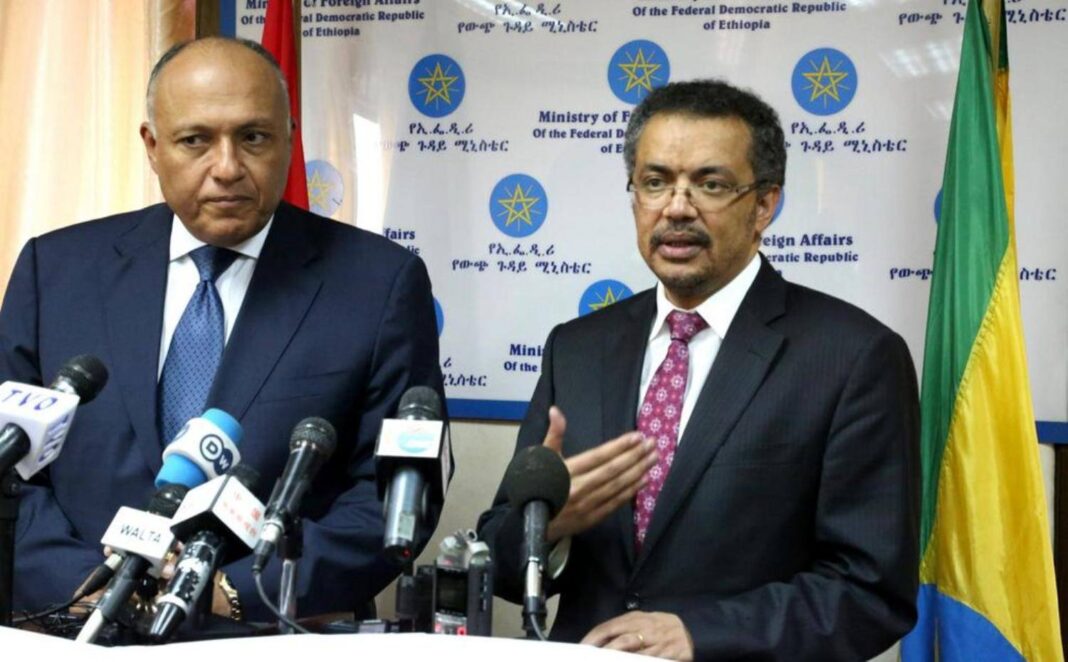 Addis Ababa (HAN) September 7, 2014 – Public diplomacy and weekly security news.  The Egyptian leaders will work in the upcoming year 2015 to increase Egypt’s share of Nile water and that the government will not yield to external pressure to adjust shares, Minister of Agriculture Adel Al Beltagy said when asked about the Egyptian government’s view of the Nile Renaissance Dam problem with Ethiopia.

“Egyptian government will not give away a single drop of water of its share of Nile Water, which totals at 55 billion cubic meters,” Al-Mal Business Daily reported Minister of Agriculture Adel Al Beltagy as saying

Egyptian Foreign Minister, Sameh Shoukry was in Addis Ababa this week  for regional dialogue to breach the diplomatic gap between Ethiopia and Egypt.  Ministerial diplomatic discussion focused on the strengthening of all-rounded bilateral relations, and deepening people-to-people and government-to-government ties as well as exchanging views on the successful conclusion of the Fourth Tripartite Talks on the Grand Ethiopian Renaissance Dam held in Khartoum and charting the way forward to build a new era of a comprehensive cooperative partnership between the two nations. H.E Tedros extended a warm welcome to H.E. Shoukry.

Ethiopian Foreign minister  H.E Tedros  noted that both nature and history closely entwined Ethio-Egyptian relations. He emphasized that current Ethio-Egypt ties featured the strong will and determination of both countries to have a mutually beneficial cooperative partnership. He expressed his hope that moves towards common ground would move their ties into a brighter future, adding that the Tripartite Talks had shown that Ethiopia, Egypt and Sudan were determined to move forward in a spirit of trust and confidence.

Ethiopian Foreign minister said there was strong urgency to keep up the momentum for lasting friendship and mutual advancement under the spirit of shared benefits for all. Dr. Tedros appreciated the strong desire of the Egyptian leadership to overcoming the differences between them and maintain their historic ties. He stressed the need to improve the scale and level of economic cooperation, and tap their potential to the fullest level.

Ethiopian Foreign minister highlighted Ethiopia’s commitment to work in concert with Egypt, and emphasized that the “swimming together” principle would sow the seeds of trust and confidence in the region and writes a new chapter of continued struggle against poverty. Dr. Tedros noted that the meeting of Prime Minister Hailemariam and President el-Sisis in Malabo in June this year had laid the foundation for a new spirit of partnership to carry relations forward. He underlined that the Grand Ethiopian Renaissance Dam was a catalyst for mutual rejuvenation, for renewal for Sudan, Ethiopia, Egypt and the region.

Foreign Minister Shoukry reiterated that Egypt remained committed to maintain the cooperative partnership and sustain the post-Malabo spirit of engagement. He added that the recent Trilateral Talks had produced a new impetus to forge convergence and compromise with the aim of meeting the mutual interests of the two peoples.

Ethiopian Foreign minister emphasized that this would cement mutual trust and confidence, shelving differences and reaching agreement. Mr. Shoukry also praised Ethiopia’s economic successes over the last decade. The two Ministers agreed on the convening of the Ethio-Egyptian Joint Ministerial Commission to nurture historic ties and launch continued growth of bilateral cooperation in selected areas of common interest. Both sides agreed to uphold the principle of amity and mutual benefit and to expand their converging interests.