Home Latest News Ethiopia: Egypt and Sudan will later affect its ability to control the... 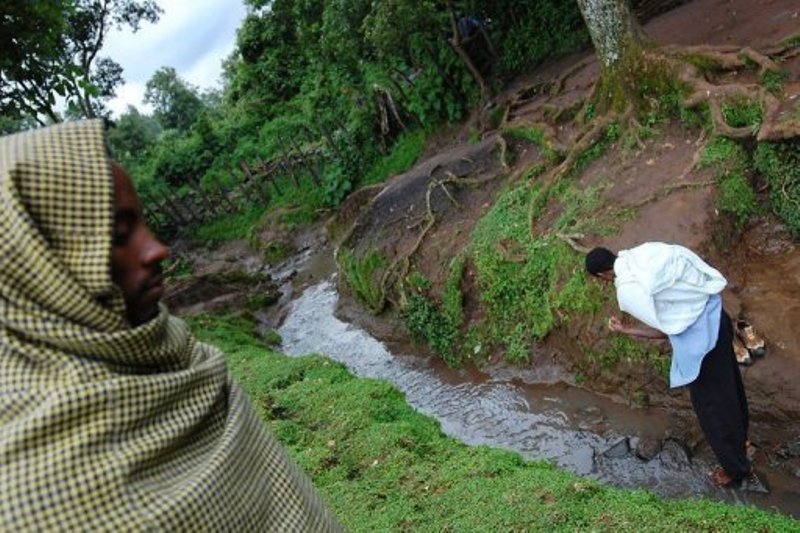 Khartoum (HAN) Jun 6 , 2014.  In June 2013, Mohamed Morsiwarned that Egypt would not allow its share of the Nile to be diminished by “one drop” after Ethiopia began diverting the Blue Nile as part of a giant dam project in Ethiopian borders. (Photo: Members of the Ethiopian Orthodox church walk in the source of the Blue Nile in northern Ethiopia.  The Blue Nile joins the White Nile in Khartoum to form the Nile river which flows through Sudan and Egypt before emptying into the Mediterranean).

“We cannot let even one drop of Nile water be affected,” Morsi said during talks with political and religious leaders broadcast live on state television.
The talks revolved around a report of a tripartite Egypt-Sudan-Ethiopia commission on Ethiopia’s decision to divert the Blue Nile for a massive dam project, sparking fears of a major impact on downstream states Egypt and Sudan. “It is necessary that we take steps to ensure Egyptian water security,” Morsi said on his official Twitter account without elaborating.

This Opinion By: Yasser Al-Hussain. Egyptian-Sudanese relations have yet to address any of the major points that are being discussed between the two countries today and this is primarily due to the Grand Ethiopian Renaissance Dam. Sudan is greatly concerned that Egyptian officials believe that it is within the best interests of their country’s national security to prevent any dams from being built outside of their national borders. Meanwhile for Sudan, any agricultural development is directly tied to building more dams, particularly outside the Sudanese borders.

Water storage facilities in Sudan are not capable of housing the amounts of water resources that are needed to irrigate the vast amounts of agricultural planes in the country. Even when it comes to the question of Halayeb, an area of disputed land between the Egyptian and Sudanese border which is currently under Egyptian control much to the fear of the Sudanese, it is likely that Egypt will use this territory as a playing card with which it will place pressure on Sudan to give up some of its most basic water rights.

On the other hand, Egypt is worried about the possibility that Sudan will later affect its ability to control the Nile’s waters through a series of proposed dams both inside and outside Sudan. Sudanese officials are accusing Egypt of using this mentality against the Sudanese people as a means to control them in a way that completely ignores the possibility of reconciliation and only works in Egypt’s favour. In fact, if Sudan were to demand its share of the Nile’s water (approximately 10 billion cubic metres according to the Nile Waters Agreement signed in 1929) Egypt would view this as an act of aggression.

At the time that Sudan preferred not to participate in the Entebbe Convention, Egypt also expressed its reluctance to abide by the 1929 Nile Water agreement to the letter, despite the fact that abiding by this agreement would grant Sudan its full water rights. Moreover, the biggest danger of the Grand Ethiopian Renaissance Dam is that it sets a precedent for other countries to go against Egypt’s will when it comes to controlling the Nile. Cairo has expressed its anger towards Ethiopia for not asking for their permission before beginning their vast project.

The overall decline in the Nile’s water supply greatly affects the amount of silt that is found in the water and Ethiopia’s overall control of water from the Blue Nile is limited because of this. One must keep in mind that the Renaissance Dam’s water capacity is a mere 74 billion cubic metres when compared to the Aswan dam’s 162 billion metres cubed. This means that approximately 14 billion cubic meters of water from the Renaissance Dam are customized to accommodate quantities of silt.

The depth of the Blue Nile in Ethiopia is approximately 1,400 metres, which means there is large potential to store water in Ethiopian not for agricultural irrigation purposes but for generating electricity because the plane is located in an area that experiences a lot of rainfall. Yet, the decline of the plateau makes it impossible to accommodate agricultural projects that are vast enough to accommodate the large amounts of water stored. It is expected that Ethiopia will consume a mere 1.5 billion metres cubed from the Blue Nile within 25 years and approximately 3.1 billion metres cubed in a hundred years.

Egypt initiated storing water supplies outside of its borders in Uganda and in Sudan in an area south of Khartoum. The Egyptian minister of irrigation recently announced Egypt’s intention to build a new dam in South Sudan for storage purposes. He also expressed Egypt’s intention to undergo a series of hydrological and hydraulic studies as well as the creation of survey maps of the lake and dam site. This was made possible thanks to geological, environmental and structural research, all of which Egypt intends to present at a workshop dedicated to their overall research on this matter.

Egypt has recently announced its initiative to plant more than 2.2 million acres of rice, which shows that the majority of Egypt’s projects focus on transferring the Nile’s waters outside the range of the Nile Basin (to Sinai). All of this affects the ecological balance in that it does not allocate enough drinking water but mostly focuses the water supply on agricultural projects that greatly affect the amount of water that is being exploited (by Egypt).

More than 123 billion metres cubed of water are stored in the High Dam, in Aswan, which far exceeds Egypt’s share. Yet, the truth of the matter is that about 10.5 billion cubed metres of water are wasted at the High Dam and the Renaissance Dam is the only facility capable of storing water right now.

It is important to note that the Renaissance Dam would help prevent flooding in Sudan, particularly in Khartoum’s flat plane. The Renaissance Dam can help control the amount of water flow that occurs throughout the autumn. Moreover, when Sudan signed the Nile Water agreement on November 8, 1959, the goal behind it was to control the flow of the Nile in a way that would be most beneficial. This gave Egypt the opportunity to build the High Dam in Aswan, which later resulted in the creation of an artificial lake that would extend 600 kilometres passed the Sudanese borders. Its waters flooded Wadi Halfa and other neighbouring villages. Eventually, water levels dropped leaving about 140,000 acres of land in Sudan suitable for agriculture due to the high deposits of silt on them.

Egypt and the Nile countries

There have always been increasing calls for countries in the Nile Basin to reconsider past water agreements. Countries such as Tanzania, Kenya and Ethiopia have threatened to build dams that would reduce the amount of water flowing into Egypt unless it agreed to revise and amend water agreements to suit today’s needs.

Fortunately, none of these threats have been carried out for the most part and this is due to Cairo’s attempts to calm the situation through artistic, technical and economic cooperation that provided assistance to these countries. However, 11 of the Nile Basin’s countries, with the exception of Sudan and Egypt, have signed the Entebbe Agreement, which is seen as the “equitable and reasonable” alternative to the Nile Basin Initiative because it would redistribute water in fair quotas.

Apparently, Egypt is not only fighting its battle over the Renaissance Dam through Ethiopia and Sudan exclusively, but it has also attempted to win over other African countries. These efforts have been in effect since the beginning of Hosni Mubarak’s rule. Further investigation on the matter revealed that the Egyptian government has issued more than $4 million in bribes to three African presidents in an effort to convince them to sway their governments’ positions on the Renaissance Dam. Since the file was listed under matters of national security, the identities of the three leaders were not revealed.

In the state of South Sudan a group of rebels associated with the former Vice President Riek Machar accused the Egyptian government of supporting former President Salva Kiir in the civil war that took place in Juba. It is said that the military support given to Kiir came in exchange for his support for Cairo’s position regarding the dam in Ethiopia and plans even point to Kiir’s intention to divert water to Egypt from the Upper Nile.

A source of Egypt’s concern is that the Entebbe Agreement replaces the Nile Basin Initiative and it outlines each country’s share in loose terms and supposedly divides water supplies depending on each state’s individual concerns and needs. Yet, the agreement will distribute water in a way that remains “fair and equitable” and this is the very thing that Egypt considers to be a threat because it currently enjoys more than its fair share of the Nile’s resources due to the current agreement. Thus, Egypt has taken a clear and firm decision not to sign the new agreement unless “it is guaranteed its full share of water from the Nile”, the former Minister of Irrigation said.

Solution and salvation on the horizon

Whether it is in regard to the Millennium Dam or the Entebbe Convention, it is not in Sudan or Egypt’s best interest to remain as they are, in a position that counters the rest of the African countries with which they share the Nile’s tributaries and basin. Their current position is somewhat controversial.

As of now, six out of the nine Nile basin countries have signed the agreement and they are: Ethiopia, Uganda, Rwanda, Tanzania, Kenya and South Sudan. The critical question here is: can Egypt afford to engage in an active war that not only confronts all of these countries but also threatens its water security? At the end of the day, the question of water supply is a life or death issue that would place Egypt’s wellbeing in jeopardy. This potential war is considered by many to be a strategic mistake on many fronts.

In my opinion, the Entebbe Convention is the first solution to calming this situation and on the other front the Ethiopian Renaissance Dam is needed for the time being.

It is Egypt’s responsibility to avoid threatening other countries with military force for every year since the Khedive’s rule, they have devised a new military strategy to intervene should their interests in the Nile and its waters be threatened or jeopardised. At the end of the day, Egypt does not want to enter into any conflicts, whether technical or economic, with the African countries of the Nile Basin because this war will undoubtedly go beyond the African dimension.

The Sudanese government has often criticised Egypt for its position concerning the Ethiopian Renaissance Dam and they have expressed that it is not an issue for Khartoum. The Sudanese government has also expressed their desire to remove this issue from its technical and governmental framework and has warned the Egyptian government that, should the relationship between Khartoum and Cairo be jeopardised over this matter, it will only open the door to bigger and more serious disagreements.

As for Ethiopia, it has stated that the Grand Renaissance Dam is 32 per cent complete and that they are ready for any confrontation from the Egyptian government. According to Ethiopian Prime Minister Hailemariam Desalegn his country is ready “to face all options and possibilities”. The only reasonable solution in this scenario would be to come up with an agreement between Cairo, Khartoum and Addis Ababa that would be signed by a tripartite committee dedicated to solving this matter. Original Article in Arabic: Cairo and Khartoum caught in the winds of the Ethiopian dam (Aljazeera).