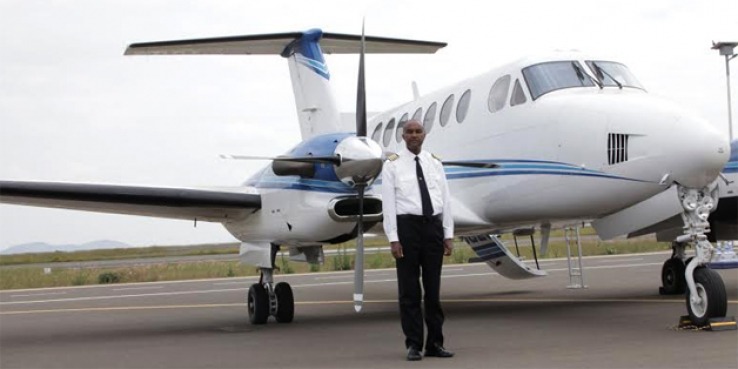 The King Air350 air ambulance aircraft was bought from a US-based company at a cost of 2.5 million dollars. Managing director of MTDN, owner of East African Aviation, Mulat Lemlemayehu (Capt.), told The Reporter that more than 500,000 US dollars were spent to equip the aircraft with a state-of-the-art medical equipment required to give emergency medical services on board.

Mulat flew the new aircraft all the way from Greenville, South Carolina to Addis Ababa three weeks ago. “It was a 28 hours flight or it took four and half days to reach here.”

According to Mulat, all modern medical equipment that enables a physician to cater emergency medical treatments aboard an aircraft have been installed on the plane. Stretcher, oxygen and a number of other medical equipment are installed in the aircraft. “A medical service equipment system has been installed in the aircraft starting from the cockpit to the cabin. This is very crucial for a patient who is under intensive care. The medical equipment meet international standards. They are the latest products available in the international market today. Now we can easily fly a patient in critical condition from point A to B anywhere in Ethiopia and neighboring countries.”

East African Aviation has hired a physician licensed by the US Federal Aviation Administration. The aircraft can carry a patient, doctor and caretaker. “The aircraft has highly functional and durable air ambulance equipment that exceeds all stringent aviation regulations. The aircraft has been inspected and approved by the Ethiopian Civil Aviation Authority,” Mulat said.

The air ambulance aircraft will soon be operational. Mulat hopes to provide the service to international aid organizations, travel agencies, VIPs, mining and construction companies who operate in remote parts of Ethiopia. “We will operate in Sudan and Djibouti.”

Mulat also extended his gratitude to Dashen Bank for the cooperation rendered.

Securing landing permit from the Ethiopian Civil Aviation Authority is a challenge. “Now you have a local company with a modern air ambulance aircraft at your disposal with a short notice.”

East African Aviation is already holding talks with travel agencies in Sudan and Djibouti. It is also planning to avail the service in Ethiopia in collaboration with local insurance companies. “We want to make the service affordable to Ethiopians. We will have a membership insurance scheme where members will be flown by the air ambulance aircraft in case of emergency. We are currently working on this with local insurance companies.”

It has also established a private pilot training school in Addis Ababa near the Addis Ababa Bole International Airport. The flight school became operational four month ago and it currently has nine cadets from Ethiopia and other African countries. Twenty more students are coming from an African country soon,” Mulat said.

Mulat is a seasoned pilot who served Ethiopian Airlines for 39 years. In his flight log book he has accumulated 27,000 hours. He commanded various aircraft starting from an old DC3 to the state-of-the-art Boeing787 Dreamliner.