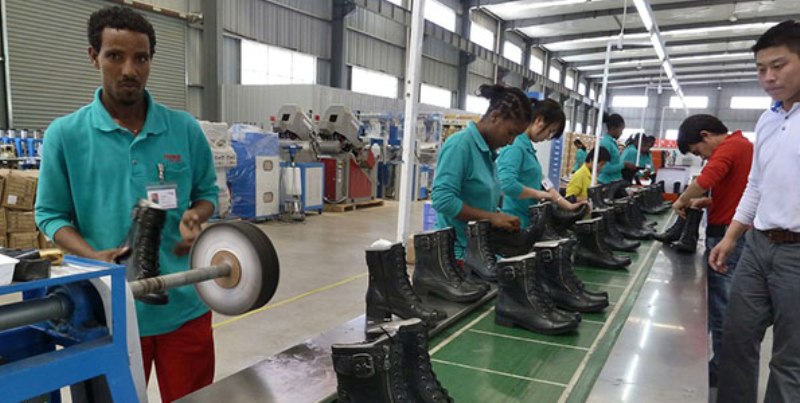 Company President Zhang Huarong, just arrived on a visit from China, spotted them through the window, sprang up and ran outside. The former People’s Liberation Army soldier harangued them loudly in Chinese, tugging at one man’s aqua polo shirt and forcing another’s shirt into his pants. Nonplussed, the workers stood silently until the eruption subsided.

Shaping up a handful of employees is one small part of Zhang’s quest to profit from Huajian’s factory wages of about $40 a month -– less than 10 percent the level in China.

“Ethiopia is exactly like China 30 years ago,” said Zhang, 55, who quit the military in 1982 to make shoes from his home in Jiangxi province with three sewing machines and now supplies such brands as Nine West and Guess?. “The poor transportation infrastructure, lots of jobless people.”

Almost three years after Zhang began his Ethiopian adventure at the invitation of the late Prime Minister Meles Zenawi, he says he’s unhappy with profits at the Dongguan Huajian Shoes Industry Co. unit, frustrated by “widespread inefficiency” in the local bureaucracy and struggling to raise factory productivity from a level he says is about a third of China’s.

Transportation and logistics that cost as much as four times those in China are prompting Huajian to set up its own trucking company. And the use of four languages in the plant — Ethiopia’s national language, Amharic; the local tongue, Oromo; English and Chinese — further complicates operations, Zhang says.
It takes two hours to drive 30 kilometers (18 miles) to the Huajian factory from the capital along the country’s main artery, illustrating the challenges. Oil tankers and trucks scream along the bumpy, potholed and, at times, unpaved road. Goats, donkeys and cows wander along the roadside and occasionally into bumper-to-bumper traffic. Minibuses and dented taxis, mostly blue Ladas from the country’s past as a Soviet ally, weave through oncoming traffic coughing a smoggy exhaust.

Huajian is nonetheless becoming a case study of Ethiopia’s emerging potential as a production center for labor-intensive products from shoes to T-shirts to handbags. In a country where 80 percent of the labor force is in agriculture, manufacturers don’t have to worry about finding new workers. Its population of about 96 million is Africa’s second-largest after Nigeria’s.
A combination of cheap labor and electricity and a government striving to attract foreign investment makes Ethiopia more attractive than many other African nations, said Deborah Brautigam, author of “The Dragon’s Gift: The Real Story of China in Africa” and a professor of international development and comparative politics at Johns Hopkins University’s School of Advanced International Studies in Washington.

“They are trying to establish conditions for transformation,” Brautigam said in a telephone interview. “It could become the China of Africa.”

Huajian’s 3,500 workers in Ethiopia produced 2 million pairs of shoes last year. Located in one of the country’s first government-supported industrial zones, the factory began operating in January 2012, only three months after Zhang decided to invest. It became profitable in its first year and now earns $100,000 to $200,000 a month, he said, calling it an insufficient return that will rise as workers become better trained.

Under bright fluorescent lights, amid the drone of machines, workers cut, glue, stitch and sew Marc Fisher brown leather boots bound for the U.S. Meanwhile, supervisors monitor quotas on whiteboards, giving small cash rewards to winning teams and criticism to those falling short.
In conclusion:  China, Africa and global retailers all have stakes in whether Ethiopia and such countries as Tanzania, Rwanda and Senegal become viable production bases for labor-intensive products. Promoting trade, boosting employment and spurring investment are among the topics that will be discussed on August 4-6 at the first White House U.S.-Africa Leaders Summit in Washington.

African nations have a compelling opportunity to seize a share of the about 80 million jobs that China will export as its manufacturers lose competitiveness, according to Justin Lin, a former World Bank chief economist who now is a professor of economics at Peking University. Sources: Bloomberg News, By Kevin Hamlin, Ilya Gridneff and William Davison