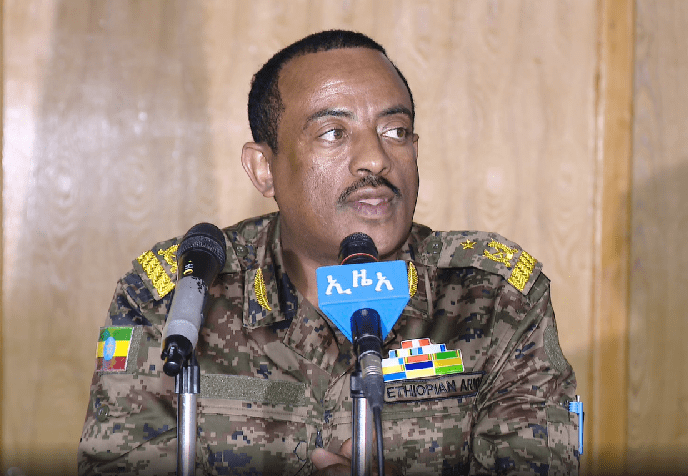 Addis Ababa November 22.2020 The National Defense Force which is engaged in a law enforcement operation in Tigray is marching to Mekelle winning in all fronts, according to Defense Forces Operation Main Department.

The defense force has consequently been executing law enforcement operation with high morale and determination against the junta.

Presenting the law enforcement operation using maps, Brigadier General Tesfaye said the defense force has been pushing from Dansha to Baekel, Humera and Shirie in the western front.

And on the northern front from Badme, Tsorena to Zalambessa, he said, adding that the defense force is now marching to Mekelle following the capture of Adigrat, the second largest city of Tigray.

On the South front, it began its operation from Raya and Chifra and merged in Chercher closing to Hewana, which is located 60 kilometers from the capital, Mekelle, he pointed out.

Underscoring the firm stand of the people of Tigray and its support to the National Defense Force, Brigadier General Tesfaye he recalled the support of the defense force to the people in fighting locusts and COVID-19 as well as in harvesting.

Despite all the false propaganda which has been disseminated by the TPLF junta, the people of Tigray are supporting the defense force and expressed their joy by handing over their weapons given to them by the junta to attack the National Defense Force.