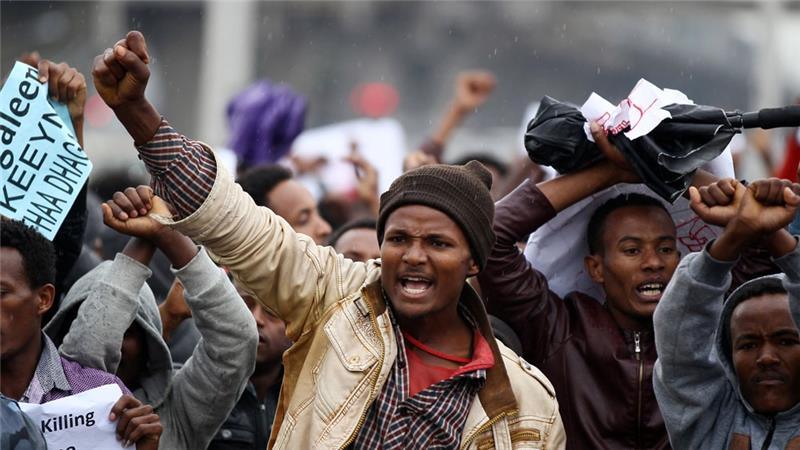 GONDAR (HAN) August 6.2016. Public Diplomacy & Regional Security News. At least six people have been reported killed over two days of protests in Ethiopia while dozens were arrested in the capital, Addis Ababa.

Six people have been reported killed in the country’s Gondar region, and dozens detained during a rally in Addis Ababa.

A source told Al Jazeera that four people were killed on Saturday in the northern Gondar region, in addition to two people killed in the area on Friday. Located 700km north of Addis Ababa, Gondar is a region dominated by the ethnic Amharas.

Ethiopian authorities would not confirm the death toll.

The reported deaths come as dozens of ethnic Oromo protesters were arrested in Addis Ababa on Saturday.

At least 500 Oromo people – protesting against alleged economic inequality and discrimination – gathered amid a heavy police presence on the capital’s main Meskel Square.

The protesters, who shouted slogans such as “we want our freedom” and “free our political prisoners”, were dispersed by police using batons. Dozens were arrested.

A Reuters news agency video of the confrontation showed unarmed protesters being beaten and kicked by police officers, as protesters ran to evade arrest.

Prime Minister Haile Mariam Dessalegn on Friday announced a ban on demonstrations, which “threaten national unity” and called on police to use all means at their disposal to prevent them.

The rally was organised by opposition groups from the Oromo, Ethiopia’s biggest ethnic group, who have held protests for months against what they say is government discrimination. They have been joined recently by ethnic Amharas, and protests have been reported in other parts of the country.

Are Ethiopia’s Oromo being violently repressed?

The Oromo and Amhara together make up some 80 percent of Ethiopia’s population and claim they suffer discrimination in favour of ethnic Tigrayans, who they say occupy the key jobs in the government and security forces.

Ethiopian authorities told the AFP news agency that at least a dozen people have been killed in clashes with police over territorial disputes in recent weeks.

Local people told AFP there had been rallies and clashes with police in the city of Ambo and Nemekte, in the Oromo region, as well as a calls for protests in Baher Dar in the Amhara region.