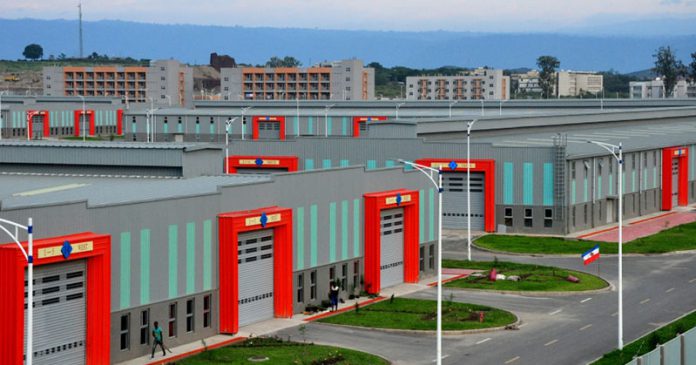 BY TSEGAY HAGOS. The proliferation of industrial parks in different corners of the country has played a pivotal role in enhancing the export sector. The industrial parks have been producing competitive products and creating ample job opportunities. But there are logjams that

hinder them from progressing further.

Marketing and Communication Office Head at the Corporation, Derbie Debele says that IPDC is striving to accomplish the mission of

being one of the best industrial parks in the world by 2025.

‘’IPDC has targeted to transform the industrial sector of the nation. It has been endeavoring to realize the goal through implementing plausible policy and strategy. This budget year, 36 domestic investors are set to involve in the parks. Consequently, 45,000 jobs would be created and 400 million USD would be generated from foreign trade as well,’’ he notes.

As to him, completed parks would start operation fully and this would have huge significance in job creation and foreign currency earnings.

‘’The issue of industrialization will not be left for IPDC alone. Rather, all stakeholders should exert their maximum efforts to address challenges related with electricity, water, road

and other infrastructures,’’ he says. Adding: ‘’Semera industrial park will see completion and start operation in this fiscal year. In addition to this, more than 31,000 homes will be built for employees .Homes are under construction in Bole Lemi 1 industrial park. This would motivate employees to enhance produce and productivity.’’

Peace and security would be prioritized to make sure investors would invest their capital without any concern and the corporation is working in collaboration with all concerned bodies as to the head.

Mekelle Industrial Park is one of the major

parks which started full operation. The park has shown encouraging development in garment and textile production. Hence, it has pressed ahead with its role in maximizing foreign currency earnings.

Filimon Terefe, General Manager of Mekelle Industrial Park says that his park has been endeavoring to upgrade production and foreign currency through taking prevention measures on COVID-19 pandemic.

He indicates that three textile and garment companies have joined the park three months ago and they have already started pre-production works.

and garment products and they will create job opportunities for 500 citizens. The companies are owned by two Chines and one Ethiopian investors. They would have massive role in improving the performance of the park,’’ he notes.

He adds that Mekelle Industrial Park has been exporting its products to American and European markets and it has planned to expand market destinations.

In the previous budget year, IPDC had gained 165 million USD from exporting industrial items to different countries of the world. The corporation’s aim to upgrade it gain to 400 million USD. This year would have massive contribution for industrial sector.