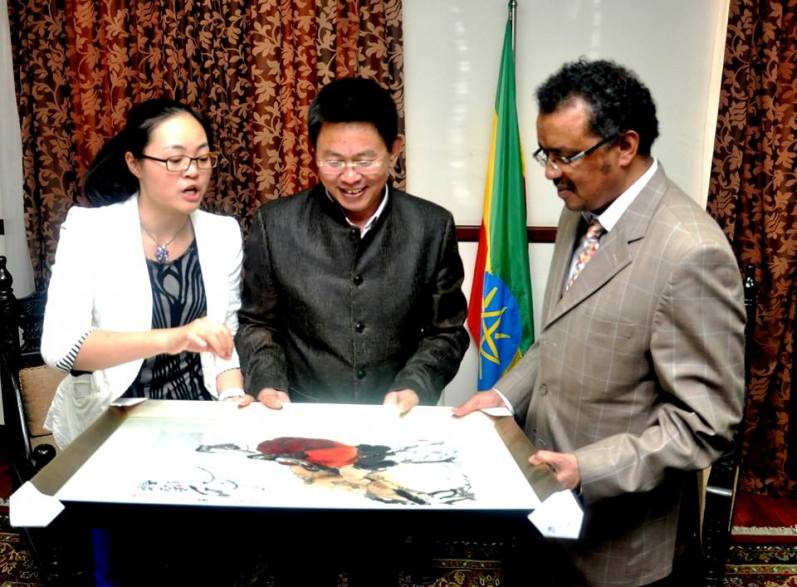 The company which built a factory in Dukem town had created 3,500 permanent and temporary jobs, the president added. The new industrial village would create from 30 to 50,000 jobs to citizens, according to Xiang Hurong. It will mainly focus on shoe production.

They have confirmed that they would jointly strive to boost relations in the heath sector.
In his facebook: The Foreign Affairs Minister Dr. Tedros said, So glad to receive from President of Huajian the final design of the construction of a light manufacturing special economic zone for shoe “Shoe City”. Preparations are well underway to start construction in few months. The total investment will be 2.2 Bln USD. Please see the attached beautiful design of the “Shoe City” which looks like a shoe. #Ethiopia poised to become a hub for shoe manufacturing. The investment is expected to create 30 to 50 thousand jobs
Sources: Tasfaye Abera – @HAN & Geeska Afrika Online Market Reporter

—
Sources: HAN & Geeska Afrika Online (1985-2014), The oldest free independent Free Press in the region, brings together top journalists from across the Horn of Africa. Including Ethiopia, Somalia, Eritrea, Sudan, Djibouti, South Sudan, Uganda, Kenya, Oromo, Amhara, Somali, Afar and Harari. Plus, we have daily translations from 150 major news organizations in the Middle East and East African regions. Contact at news@geeskaafrika.com