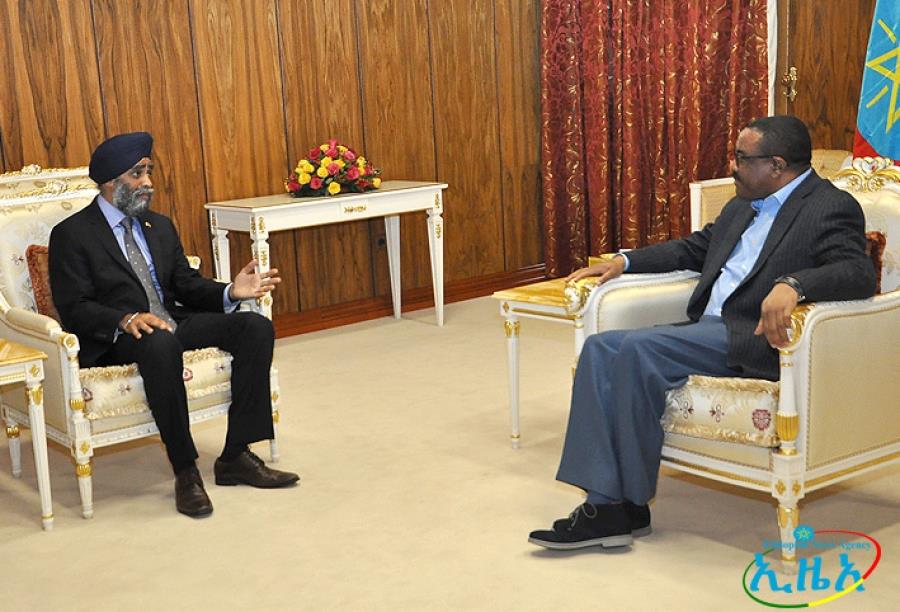 Addis Ababa (HAN) August 11.2016. Public Diplomacy & Regional Security News. Ethiopia and Canada will see increase in their exchanges in the fields of peacekeeping and security, according to Canadian Minister of Defense, Harjit Singh Sajjan.

“It is a great opportunity for Canada and Ethiopia to build this relationship. We have had a long tradition of working together as militaries from Korea to many different UN missions we have conducted,” the Canadian Minister told journalists following his meeting with Hailemariam.

Minister Sajjan appreciated Ethiopia’s endeavors and the so far contribution in peacekeeping missions in the Horn of Africa and beyond.

“It [Ethiopia] is already showing a leadership role,” he said, adding Canada values Ethiopia’s contribution in trying to bring stability to Somalia and the South Sudan.

He said Canada is interested to cooperate with Ethiopian in areas of peacekeeping and security, with further interest to enhance cooperation in other fields such as trade and investment.

In Ethiopia today. “No peace! No prosperity!” I couldn’t have said it better myself. #ConflictPrevention pic.twitter.com/cxENUK9NqQ

Some 57 Canadian investors with an aggregate capital of USD 57 million have invested in Ethiopia.

Prime Minister Hailemariam briefed the visiting Canadian minister on Ethiopia’s role in maintaining peace and security in the Horn region particularly in Somalia and South Sudan.

He underlined the criticality of restoring peace and security for sustainable development, and the necessity of strengthening cooperation in the field.

Hailemariam called for a strengthened diplomatic and economic cooperation between Ethiopian and Canada.

Deputy Prime Minister Demeke Mekonnen visited Canada last May during which the two countries exchanged views on ways of cooperating in various areas of trade and investment.