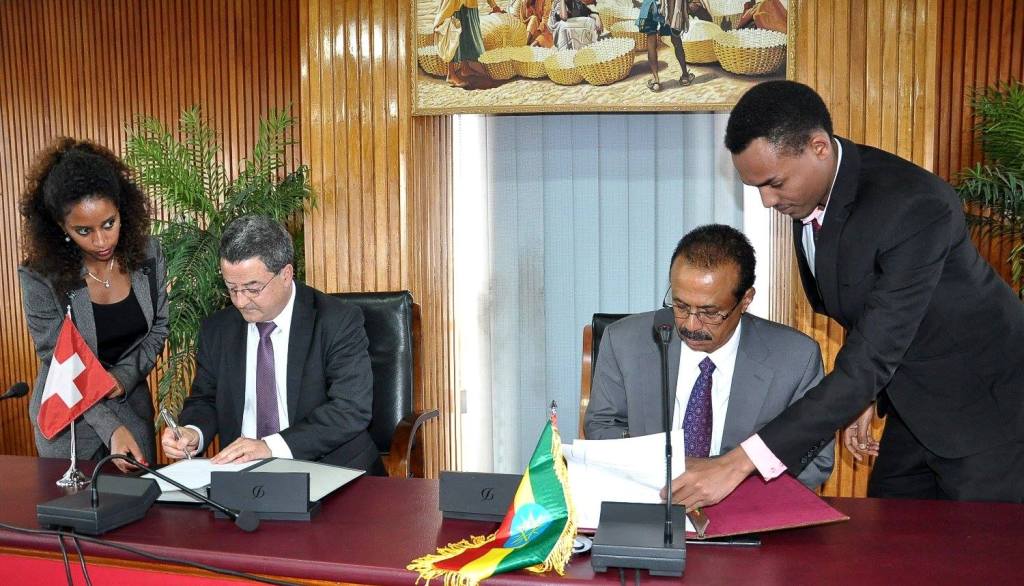 Ethiopia State Minister for Foreign Affairs, Ambassador Berhane briefed Mr. Rossier on Ethiopia’s socio-economic and political progress over the last two decades and underlined that, now one of the fastest growing economies in the world, was witnessing double digit economic growth. Ambassador Berhane stressed that Ethiopia and Swiss should strive to enhance cooperation and collaboration in the areas of trade, tourism, investment, science and technology.

Ethiopia State Minister for Foreign Affairs, Ambassador Berhanepointed out that the Ethiopian government has been empowering the private sector to encourage it to play a greater role to help maintain the growth trajectory. He added that the Government was committed to ensure active participation at grass-root level on socio-economic and political issues and to strengthen Ethiopia’s multi-party system and democracy.

Ethiopia State Minister for Foreign Affairs, Ambassador Berhane also briefed the Swiss State Secretary on the current security situation in Somalia and South Sudan. Rossier appreciated Ethiopia’s socio-economic and political progress and its pivotal role in helping to stabilize and integrate the Horn of Africa in particular and Africa in general. The Swiss State Secretary said Ethiopia and Switzerland should work to benefit the people of both nations in all possible areas of social, economic and political affairs. Swiss State Secretary for Foreign Affairs said that Swiss private companies had an interest in working in co-operation with their Ethiopian counterparts.

At the end of their discussion, State Minister Ambassador Berhane Gebre-Christos and the  Rossier, Swiss State Secretary for Foreign Affairs, signed a Memorandum of Understanding to enhance bilateral co-operations. This will help the two countries collaborate on political issues in bilateral and international forums. Ethiopia and Switzerland are expected to sign agreements in some economic and technical areas in the near future with Switzerland providing training on federalism and extending technical assistance in science and technology as well as other spheres.