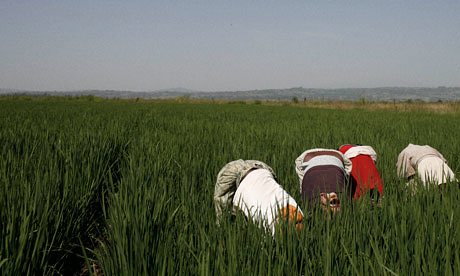 ADDIS ABABA (HAN) March 25. 2016. Public Diplomacy & Regional Security News. An Ethiopian state body that has been involved in leasing tracts of land for commercial farming has suspended the issuance of new licences until it completes a review because of scant progress in developing areas leased so far, an official said.

The Horn of Africa country in 2011 allocated 3.6 million hectares of land, close to the size of Switzerland, for firms seeking to invest in agriculture, mostly around its western Gambela and Benishangul Gumuz regions.

More than 2.43 million hectares has been leased to nearly 5,700 domestic and foreign firms at 20 Ethiopian birr ($0.90) per hectare on average, said Daniel Zenebe, spokesman for the Agriculture Investment and Land Administration Agency.

But investors have only developed 30 percent of the land leased. “There is a need for a review on where it has gone wrong. The suspension is indefinite,” he said.

For now, the suspension affects the Agriculture Investment and Land Administration Agency, which has leased 476,000 hectares since it was set up in 2013, he said.

But he added that regional authorities, which were responsible for leasing 1.95 million hectares, were expected to suspend such activity soon.

Addis Ababa said leasing land aimed to introduce modern technology and new farming techniques. But the programme has attracted criticism from rights groups, saying it often hurt the environment or led to forced resettlemment of some locals.

“The policy’s aim is to boost production, foster the transfer of technology, as well as increase foreign currency earnings from exports,” Daniel said. “But we clearly have an execution problem.”

Ethiopia, which suffered a devastating famine in 1984, is facing renewed drought that has left more than 10 million people facing food insecurity. But government support mechanisms now in place are preventing a deep crisis, experts say.

In one case of a land licence, Daniel said an international firm had cultivated just 1,200 hectaries out 100,000 hectares it was awarded after seven years. He also cited cases where different investors were awarded the overlapping tracts of land.

The Oakland Institute, a U.S.-based research group, has said land deals in Ethiopia lacked transparency, had an adverse impact on the environment and had led to the forceful resettlement of thousands of people.