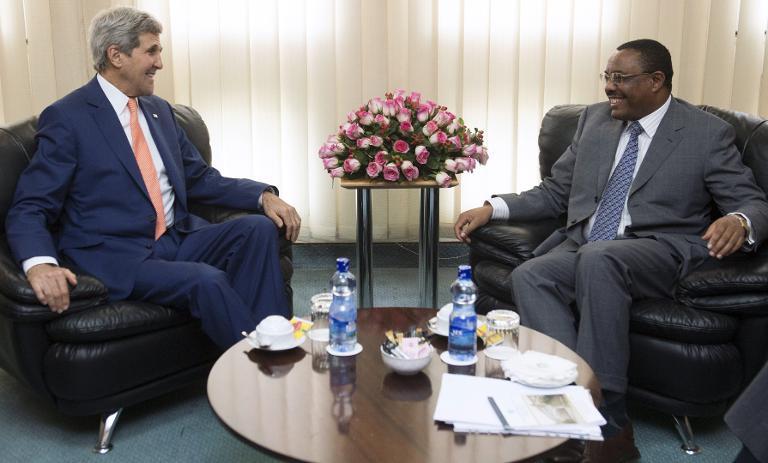 Addis Ababa (HAN) May 2, 2014 – American Diplomat in Nairobi Kenya told Geeska Afrika Online that the arrests of Bloggers and Journalists again signals that anyone who criticizes the Ethiopian government in Ethiopia  will be silenced. Photo reception with Ethiopian Prime Minister Hailemariam Desalegn (R) meets with US Secretary of State John Kerry at the United Nations Economic Commission for Africa in Addis Abada (Ethiopia) AP.  Dear Reader If you like this article,  Share it with your community, friends or circles, through our Facebook Page, Like It.

Opinion contributed by Abdulbasit Abdusemed. The Ethiopian ruling party, EPRDF, had followed different ideological routes – from an adherent of Marxist and Maoist teachings to a proponent of developmental state ideology – since its days of armed struggle against the Derg regime to its two decades as government. However, it surprisingly managed to maintain a working relationship with the US & its western alliance. I would like to categorize their relationship to three key eras.

The government of Ethiopia led, by Zenawi’s EPRDF, had special focus on stability, peace and national reconciliation until election 2005. The US & its western alliance tried to shape EPRDF’s policies. But Zenawi’s hidden ideology made them confused on the way the new Ethiopia continues. By Zenawi’s intelligent mind westerners miss the key step that gave EPRDF flexibility in its ideology.


Ethiopian Eritrea war is the one of strategic consequences to EPRDF relations with the West, especially the US. AS EPRDF have struggled inter-party conflict especially in TPLF, Zenawi’s team in TPLF secured power. The reform in in the EPRDF solved most problems internally and gave re-birth to EPRDF to be diplomatic winner than military winner. Zenawi overturned the wests bias to Eritirea and began his diplomacy offensive by creating tactical relationship with western partners that at the end isolated Eritrea successfully. During early stages of their relationship, their relationship faces a hard problem which was election 2005.

As equal as Ethio-Eritrea war, election 2005 shaken foreign relations and gave great lesson to Zenawi’s EPRDF so as to shape its relation with US & its western alliance’s with limited constraint.

After election 2005, the relationship between EPRDF and the US & its western alliance is limited to aid and anti-terrorism. China became a key partner in funding Zenawi’s developmental state ideology. New NGO law and anti-terrorism law are the problematic aspects of their relationship. Jailed journalists and press freedom were challenging Zenawi’s until his unexpected death. Zenawi defied the pressure by using a joker card – the fight with al Shabaab, which is an enemy for both. Let’s see Zenawi’s tactic to protect his country & his ideology from the long western hands.

Zenawi’s EPRDF leadership got a great lesson from election 2005. All of us agree on that. But what did they learn? What was their mistake? How he and his party got lesson from the mistakes? It is common to hear that after election 2005, EPRDF began developing the country, create micro-enterprises, expand no of party members, narrowed political space, arrest journalists, closed newspapers, and so on. But according to my opinion, Zenawi, superbly examined the real and specific reason behind election 2005 violence.

Zenawi intelligently examined each channel the violence road gone and got that there is a great external force that strives at strategically dissolving new-borne Ethiopia. Zenawi, the great leader and reader, found that the agents of distabilization are simply tools. The owners are western champions of color-revolution, the likes of George Soros. Zenawi, the champion of development, therefore understood their ways and tools – their diverse channels, their eagerness to assault alternative ideologies, how they control and coordinate with major global institutions and western governments. Zenawi carefully analyzed how to thwart this disaster (i.e. the Soros’ system) from his honored and great Ethiopian people. Zenawi, the African icon, therefore used his intelligence through modernized democratic laws and regulations that the nation and nationalities of Ethiopian people passed legally through their representatives in parliament. These rules & regulations are law of NGO and law of anti-terrorism.

Zenawi adopted the wisdom that: “To be far and safe from sheytan (Arabic word meaning devil) you have to be far & safe from the way takes you to sheytan”

Thus, blocked the way that takes to Soros desire for “revolution” through creative methods and became a model for many.

Following Zenawi’s sudden death, the new leadership led by “ the chosen one”- Hailemariam Desalegn is struggling internally i.e corruption, good governance and externally with Egypt’s campaign against the construction of Great Ethiopian Renaissance Dam(GERD) and preparing for upcoming US & its western allliance’s movement to challenge his leadership.

Internally, Hailemariam’s administration got a strong support from the public by his heroic move against his party’s corrupt leaders and members and oligarchs. But the public doubts his ability to challenge the inter-party network of corruption tactically and systematically. To this extent he, as the party’s top man, need more help from EPRDF’S old guards. Anyways, Hailemariam’s ability in handling internal problems is an assignment after the election next year.

Externally, Hailemariam is facing a new tough test from westerners especially the US. This year the US state of department report shows signs that the US is ready to test the new EPRDF leadership.

Is there any sign of color revolution in Ethiopia?

Plots to stage color revolutions are not a new for Ethiopia. It was at the time of election 2005 that the color revolution style riot left many dead in the streets of Addis Ababa, a dark history in EPRDF era. In the following years, Zenawi’s leadership struggled to constrain the channels through legislative rules and regulations – esp. NGO and anti- terrorism law.

Therefore, the western champions of color were forced to shift to their “plan B”. This plan is forcing Ethiopia to cancel these laws, i.e. HRW always uses anti-terrorism law and NGO law as a reason for any complain in human rights, democracy and journalists. So it is possible to say that Hailemariam and his administration are looking at the situation and understood it very well, therefore, they began preparation to face this upcoming chaos and its new tools – such as the use of social media for creating chaos.

What is the reason behind the recent detention of Zone9 bloggers? Who are they? Even though there is different rumour on the identity of the detained bloggers individually, everybody can understand they are informal channels of Semayawi party. They are hungry for streets of Addis and a color revolution. Another view of point is looking at EPRDFites experience behind this movement.

As we see, EPRDFites ETV showed a documentary film on the disasters of color revolution a few weeks before the detention. From experience of EPRDF’s style, the first step EPRDFites take to tackle some problem is an ETV documentary. Obviously it is difficult to specifically describe their aim, but its possibility is within range of terrorism and color revolution.

What is the reason behind the timing of detaining?

John Kerry himself just before a few months ago presented annual human right and democracy report to US Congress that shakes US & Ethiopia’s relationship. His message was clear. His message is for Hailemariam, the party’s top man. His speech in Congress is clear message that the US will try to check Hailemariam’s ability to handle their pressure, especially by naming Eskendir Nega as a hero for democracy.

This makes EPRDF’s old guards angry, that they plan to counter attack the game well. The counter attack may be detaining of zone9ners upon john Kerry’s arrival in Addis. More and more, this tactic is to show that EPRDF’S new leadership is aggressive as the former one.

The special gift “zone9ners” is waiting you, Mr. John Kerry. Take the gift and tell the congress and your western alliances, how really the gift is special. If my analysis is right, it is sorry time for the detained bloggers, a superb handling of EPRDF’S new generation and a blow to George Soros and his color revolution agenda and machinations.