Home Ethiopia Ethiopia becomes the first African country to be president of the Climate... 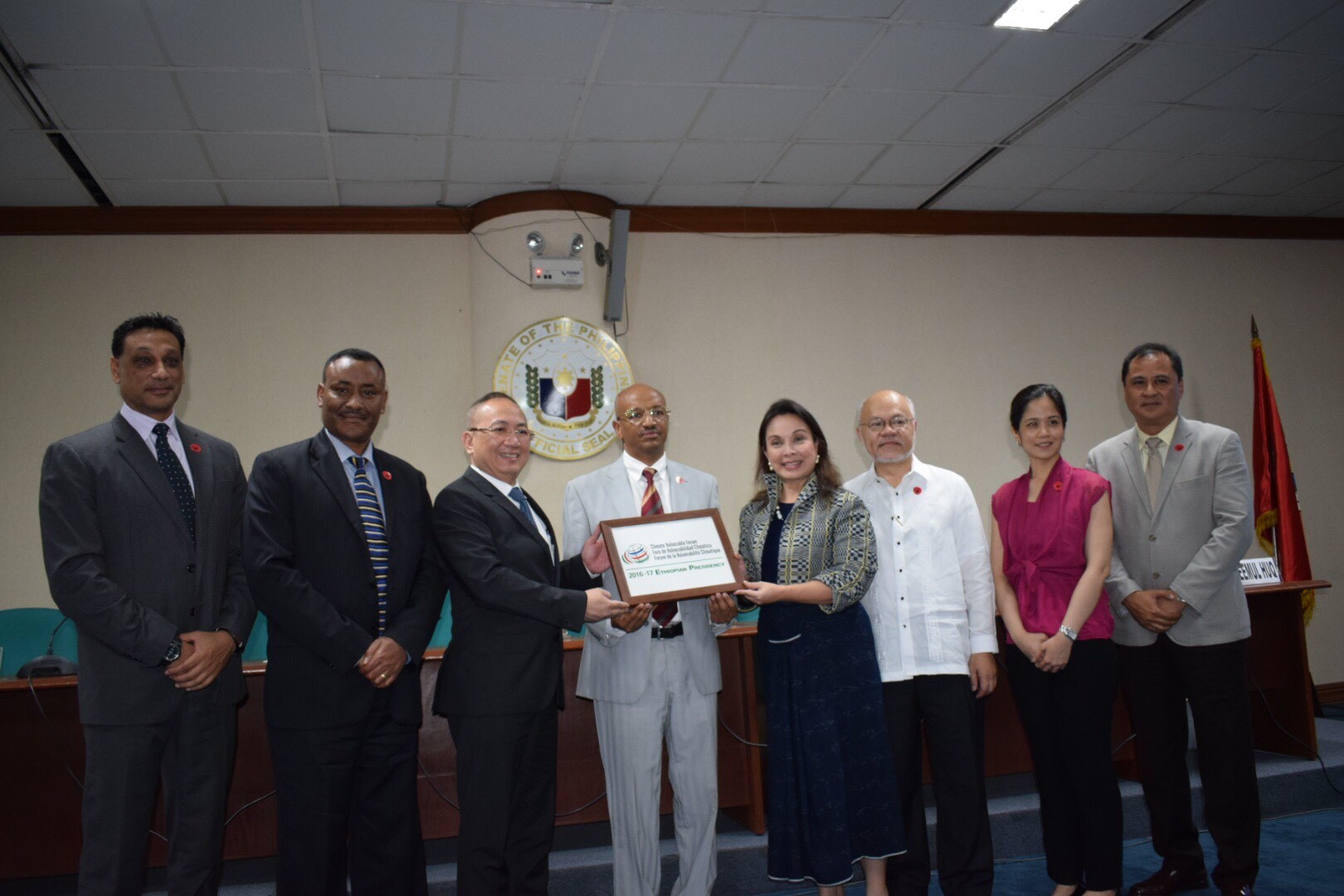 In an official handover ceremony held today (August 15, 2016), in Manilla, the Philippines, Ethiopia was earmarked to be the first African country to be the president of the Climate Vulnerable Forum for the coming two years.

A High-level Ethiopian Delegation led by Dr. Shiferaw Teklemariam, Minister of Environment, Forestry and Climate Change, received the chairmanship of the Forum of 43 members states; a group of countries that are highly vulnerable for the adverse impacts of climate change.

Ethiopia’s Minister of Environment, Forestry and Climate Change,  Dr. Shiferaw Teklemariam thanked the Republic of Philippines and appreciated the that the country has shown over the last two years. He also expressed his gratitude for the trust and confidence bestowed upon his country to lead the Forum for the coming two years. He also assured member states the full commitment and readiness of the Ethiopian Government to effectively discharge its responsibilities. Among others, the Ethiopian presidency would focus on accessing climate finance for member states, enhancing capacity building and further revitalizing partnership and cooperation, he added.

The Minister further underscored that climate change is already affecting vulnerable counties including Ethiopia though their contribution is significantly negligible. Ethiopia, he said, is taking multiple and coordinated actions to build a climate resilient and green economy with the target of building a low Caron middle income economy by 2030.

The Forum is a coalition of 43 countries from Africa, Asia & Oceania and Latin America that are extremely vulnerable for the negative consequences of climate change. The Forum aims to enhance the visibility of the member states at international, regional and domestic levels and advocates the importance of taking urgent actions to address the negative effects of climate change which continues to pose serious threats for humanity. The Forum was established in 2009.”

“The CVF has elevated the voice of the vulnerable under the Philippine presidency and we are certain the Ethiopian chair will lift climate action to an even higher sense of urgency. Our goal is to keep temperatures under 1.5C degrees to enable our countries to reap early the benefits of economic security, job creation and environmental safety,” said Secretary Emmanuel de Guzman of the Philippines Climate Change Commission.

Dr. Shiferaw Teklemariam Menbacho, Minister of Environment, Forestry and Climate Change of Ethiopia, added that: “Under Ethiopian presidency of the CVF will be vocal, visionary, visible and vigilant in our work to limit the rise of global temperature to 1.5C degrees.”

Climate change is widely accepted as the single most pressing issue facing the planet. The new findings, entitled the Low Carbon Monitor: Philippines, argue that a difference of 0.5°C in global temperatures has enormous repercussions for the world’s physical environment and for the frequency and severity of climate change impacts. As compared with 2°C of warming, limiting the temperature increase to 1.5°C would reduce expected heat wave spells for tropical developing countries worldwide by about one third. It would also lower the risks of reduced yields of key crops, and substantially reduce the forecasted increase in extreme rainfall downpours and associated flooding.

The research also indicates that limiting the rise to 1.5°C results in the least economic losses, avoiding a substantial loss to the global economy by 2050.

Responding to the findings, Senator Loren Legarda, Chair of the Philippine Senate Committee on Climate Change, said: “Bending the global warming curve to 1.5°C is a moral imperative, because it means saving the lives and livelihoods of hundreds of millions of people; it means upholding the human rights of the poor and vulnerable; it means ensuring the integrity of our ecosystems.”

Conceptualized in 2011 at the CVF’s Dhaka Ministerial Declaration in Bangladesh, the Low-Carbon Monitor complements the CVF Climate Vulnerability Monitor, which details the impact of climate change and the needs for adaptation among CVF member-states.