Home Ethiopia Ethiopia: Ban Ki-Moon "The LDC’ are the most vulnerable group" 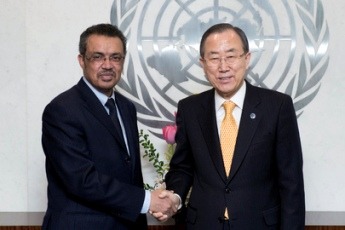 Addis Ababa (HAN) October 6, 2015 – Public Diplomacy and Regional Investment Initiative News. The Ethiopian Foreign Minister Dr.Tedros Adhanom delivered remarks at the annual Ministerial Meeting of the Least Developed Countries on the 1st of October 2015 at the sidelines of the 70th UN General Assembly.

He however noted that,”LDCs are not just characterized by their challenges rather they represent enormous reservoirs of untapped potential” while adding “Unlocking this potential will be the litmus test of Agenda 2030.”

Ban Ki-Moon underlined the importance of the SDG’s and the Addis Ababa Action Agenda in addressing the challenges of LDC’s in terms of providing a framework for global partnership and mobilizing resources. He emphasized the importance of reaching a deal in Paris on climate change as the LDC’ group are the most vulnerable group. He urged the LDC’s to play constructive role in the Paris negotiations which will be held in December 2015 . Ban also noted that “the high-level mid-term review of the Istanbul Programme of Action, which will take place in Antalya, Turkey, in June, will provide a good opportunity to make further progress towards the graduation of LDCs.”

Dr Tedros in his address noted that the primary responsibility of development rests on the LDC’s in mobilizing domestic resources and enhancing production capacities. He in particular stressed the importance of public investments in infrastructure and social sectors as extremely crucial in the implementation of the SDG’s He further highlighted the importance of ending the marginalisatio of LDC’s from international trade due to absence of level playing field and the reversal of the decline in Official Development Assistance as important steps to close the financial gap in funding the SDG’s.

The newly elected chair, Shahriar Alam, state Minister for Foreign Affairs of Bangladesh in his remarks noted that he would hold consultations soon to ensure that the mid-term review of the Istanbul Programe of Action (IPoA), the road-map of graduation for the LDCs, and informed that Bangladesh is successful, and is favorable to the LDCs.