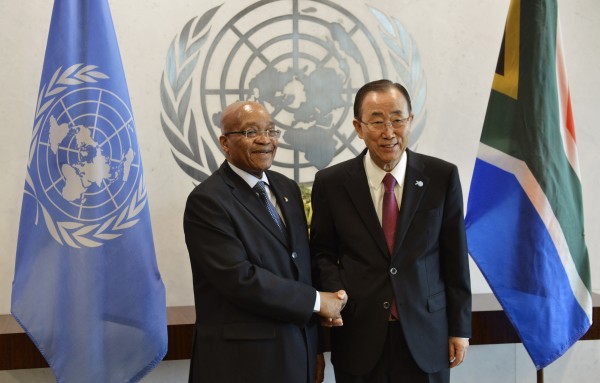 Speaking to reporters at a summit of African Union leaders in Ethiopia, the U.N. chief called the situation a matter of human dignity and rights.

“That is why it’s a matter of urgency that I am urging African leaders to act in one voice, and also particularly urging President [Pierre] Nkurunziza and his government to listen very carefully and engage in inclusive dialogue,” Ban said.

On Saturday, Ban told the summit that peacekeepers are necessary in Burundi where the government has warned that any African Union forces would be considered an invasion force.

The AU is considering sending 5,000 peacekeepers to stem the political violence that erupted last year when President Nkurunziza announced he would seek a third term. Opponents say that is unconstitutional.

Since then, international data show more than 400 people have been killed in Burundi, with new witness accounts of mass graves near the capital. Those accounts were bolstered Friday when Amnesty International published satellite imagery showing five possible mass gravesites near a location where government security forces were accused of killing scores of people in December.

Saturday’s closed-door AU talks extended through the day, and it was not clear when a vote would be taken.

A two-thirds majority of the 54-member union is required to deploy a peacekeeping force.

“I applaud you for taking collective responsibility and acting decisively” to ease the crisis, Ban told summit attendees.

Nkurunziza is not attending the summit, but Foreign Minister Alain Aime Nyamitwe said Saturday that Bujumbura had the backing of other African nations in opposing peacekeepers. When asked for details of that backing, Nyamitwe described it to the French news agency AFP as “very strong. You will see.”

The U.N. human rights office said Friday that it had found six more cases of suspected sexual abuse against children in the CAR, including allegations from a 7-year-old girl who said she was forced to perform sexual acts on soldiers in exchange for food and water.

U.N. rights chief Anthony Banbury, speaking Friday, said there were likely to be 69 confirmed allegations of sexual abuse or exploitation against members of the U.N.’s 16 peacekeeping missions currently deployed around the world.

The United Nations can report abuse allegations, but countries where those personnel are deployed are responsible for prosecutions.