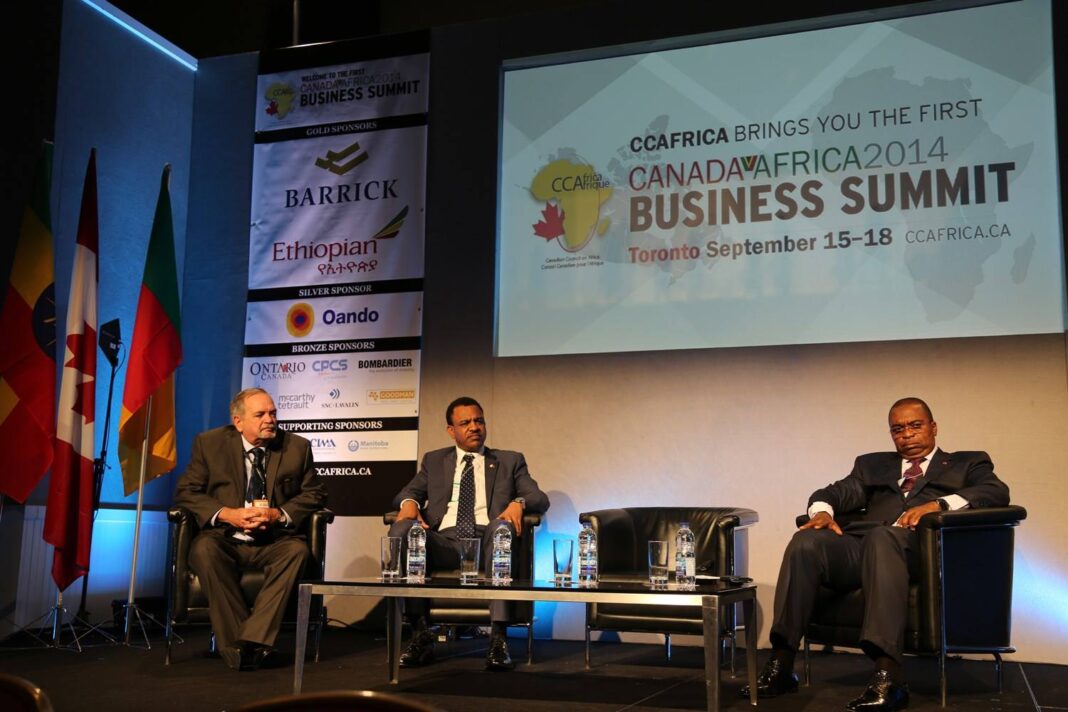 Toronto (HAN) September 18, 2014 – Public diplomacy and regional strategic partnership news. According to the Executive director of Canadian Eye on Africa, Toronto city  hosted the first  Canada-Africa Business Summit with a series of plenary sessions on various issues, including the “Rise of Africa,” “Project Financing,’ and “Risk Management.” African and Canadian Ministers, renowned business persons and professionals as well as business leaders made extensive deliberations on ways to bridging Africa’s financing gap in infrastructure and other sectors, improving African business and investment climate, and balancing opportunities as well as managing legal, financial, operational, technical, institutional and human capital risks. On the occasion,

Ethiopia’s Minister of Water, Irrigation and Energy,, AlemayehuTegenu,  noted that the Summit was an important platform for both Canada and African countries to discover opportunities and turn them into tangible benefits. He underscored that joining hands in commercial ties would help both Africa and Canada forge ahead a pioneering spirit of a mutually beneficial cooperative partnership, adding that Canadian firms had shown interests to engage in Africa’s key untapped investment areas. This, he said, would keep the momentum of successful economic trajectory being witnessed in Ethiopia and other African countries.He also noted that Ethiopia was devoting time and more energy for its economic take off, saying that the Government’s commitment and people’s demonstration resulted in a decade of double digit economic growth, massive infrastructural development, stable economic and political stability, improved quality of life, and emerging of FDI inflows as well as establishing industrial development zones.

The economic development of Ethiopia was a critical contributor for the creation of a harmonious, stable and prosperous region, adding that power trade with neighbors was a huge drive for the transformation of regional economic integration. Ms. Lisa Filiatranlt, Canada’s Acting Assistant Deputy Minister for Africa Branch Department of Foreign Affairs, Trade and Development, on her part extended her warm welcome to the participants, stating that development indicators of Africa were indicative of the growing middle class, broad-based change and double digit economic growth. She also mentioned that Africa was emerging as a new growth pole of investment and business opportunity, noting that Canada was committed to keep to the set course with the aim of providing assistance to African countries and the African Union to promote peace and security, economic integration and democratic governance. She also underscored the importance of strengthening commercial ties of Africa and Canada with the view to unlock new dynamism for mutual development. Nola Kianza, Founder and Director of CCAfrica, said that Africa was championing as a “most exciting growth opportunity,” reiterating that six of the ten top fastest growing countries by GDP were African. He indicated that Africa’s ascendance gave broader space to resilient and broad-based growth.

The sessions featured challenges facing the continent as well as the positive trends of Africa’s economic trajectory as these were indicative of the Africa Rising narrative. On the remaining two days, participants will deliberate on various sectors like investment, energy, infrastructure, public-private partnership, and natural resources