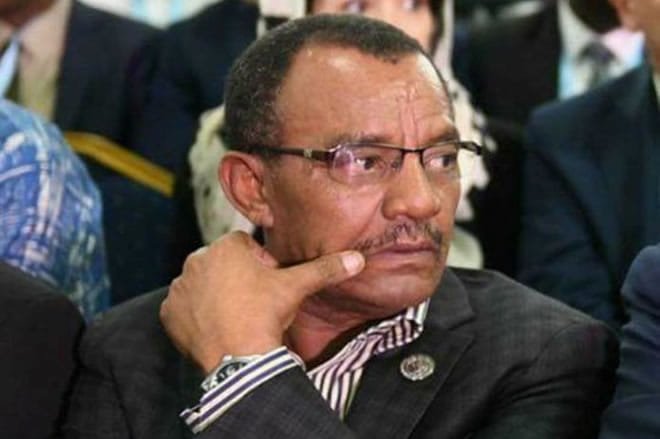 Colonel Gebregziabher, widely known as “General Gebre,” or “General Gebre Heard,” is a household name in Somali politics, renowned primarily for his stint in charge of the Ethiopian armed forces in Somalia, and the subsequent decade he spent meddling in Somali political affairs. His activities in Somalia have garnered him infamy over the years. As the commander of Ethiopian armed forces in Somalia, he is accused of overseeing the massacres of civilians, the shelling of densely populated civilian districts, the ransacking of hospitals in Somalia’s capital Mogadishu and various other war crimes, committed between 2006-2008. These atrocities caused international condemnation of the Ethiopian government and armed forces. The backlash prompted the Ethiopian government to recall him to Addis Ababa and eventually replace him in 2008. The colonel has never publicly commented on the allegations.

In 2017 Colonel Gebregziabher, who is not a general, had been given a promotion by the regional organisation to work as a senior political advisor for the organisation’s “Somalia Peace Facilitation” office. Based in IGAD’s Addis Ababa office in the city’s Bole district, he received a monthly salary of 7015.63 US$ for his work.

There isn’t much traceable information on Colonel Gebregziabher’s background. The man avoids media and has never even gone on record to make a public statement, despite having been in charge of Ethiopian military operations in Somalia for two years. But in the book “Agazi,” published by Ethiopian author Birhanu Abadi, Colonel Gebregziabher is said to have been born in the historical city of Axum sometime in the sixties. The author explains that the Colonel joined the Tigrayan People’s Liberation Front (TPLF) struggle in his youth and fought in the Ethiopian civil war. After the overthrow of the Derg regime in 1991, he had a brief stint in the Mekele City administration before joining the then newly formed Ethiopian army.

When Ethiopian troops crossed the border into Somalia in December of 2006, Colonel Gebregziabher was mobilized to Somalia to head the effort to fight the Union of Islamic Courts militia that had taken over Mogadishu. The Ethiopian army would go on to capture the Somali capital within weeks and maintained a military presence battling remnants of the defeated Islamists, before pulling out in 2009.

Ethiopia faced international condemnation from governments and rights groups alike for the way its military conducted its anti insurgency campaign in Somalia. The Ethiopian army was accused of indiscriminate firing of mortars into civilian quarters as well as carrying out summary executions of civilians. Colonel Gebregziabher ran operations in Somalia from an office in either Mogadishu’s Ministry of Defense building or the Presidential Palace at Villa Somalia, both of which had been converted into makeshift Ethiopian military bases. A Human Rights Watch report published in August of 2007 describes how barrages of shells would be fired indiscriminately from troops manning these locations, killing scores of civilians. Bombings of hospitals were also reported.

Apparently given carte blanche to pummel the city into submission, Ethiopian troops carried out grisly crimes, the most horrifying among them being the Al Hidaya Mosque massacre in April of 2008. In that incident, over twenty worshipers were killed, some had their throats slit by soldiers.

The Ethiopian army finally relieved Colonel Gebregziabher from his duties in August of 2008. By then, reports in Somali media detailed how the Ethiopian colonel had amassed wealth working alongside corrupt Somali politicians and dealing in contraband. In February of 2008, he had been reported as having lost his temper when accused by Somali President Abdullahi Yusuf Ahmed of having Ethiopian troops fire on Somali government positions. In a widely reported account of what happened, Colonel Gebregziabher is said to have slapped the President and threatened to kill him before walking away. The Ethiopian commander had become by far the most influential and powerful man in Somalia.

With increasing reports of gruesome army killings and his backdoor personal dealings, Colonel Gebregziabher had become a public relations disaster and thus something of a liability to the Ethiopian army.

Despite his being recalled, he would not give up his near mafia-esque presence in Somalia. Months after his leaving his army post, he was spotted back in the country. He returned to Mogadishu, now officially employed by IGAD. Despite a job description that now required him to seek solutions for stabilizing the country, all indications point to his continuing to twist the arm of politicians in pursuit of personal business interests.

Colonel Gebregziabher continued to use his prominence to influence the way the Somali government was run. He was constantly seen with government officials and the country’s business elite. It would seem that nobody would dare question his presence or his custom of carrying a pistol in his back pocket everywhere he went.

His ability to brown nose Somali politicians was largely aided by his funding of various militant groups. He was reportedly closely affiliated with Ahlu Sunna Wahljama’a, a Somali militia of moderate Sufi Muslims opposed to the hardliner extremism of jihadist groups like Al Shabab. At the same time, a Wikileaks cable from 2008 details the claims of Somali government official Hussein Mohammed who accused Colonel Gebregziabher of being in cahoots with Al Shabab itself.

Colonel Gebregziabher had a highly publicized falling out with then President of Somalia’s Transitional Federal Government (TFG), Abdullahi Yusuf. He later reportedly lobbied IGAD to sanction Yusuf, which they did in late 2008. Politically paralyzed, The Somali President resigned a week later. The resignation helped further the rogue Ethiopian colonel’s reputation as the powerful figure behind the scenes who called the shots in Somalia.

No longer permitted to set foot in Somalia, he signed with IGAD what ultimately became his final working contract, the one that gave him the title of “Somalia peace facilitator.”

Colonel Gebregziabher’s ability to maintain a relevant and powerful presence in Somalia throughout the decade was due to the backing he enjoyed of high level government and military officials in Ethiopia. The colonel’s returning to Somalia as an IGAD officer merely months after his being replaced as army commander there could have only happened with Addis Ababa’s approval. Ethiopian Foreign Minister Seyoum Mesfin was dispatched to Somalia in February of 2008 to meet with the country’s leaders. According to a Wikileaks cable, at the meeting between Seyoum Mesfin and senior Somali TFG officials including President Abdullahi Yusuf Ahmed, the President requested Colonel Gebregziabher’s removal from the country. But Seyoum scoffed at the request and instead slammed the President for his governing inadequacies, threatening to halt Ethiopia’s support of the TFG.

The colonel’s finding favour among the security apparatus’ top brass is clearly what helped him thrive at IGAD as well. The organisation after all, has repeatedly faced accusations of being an Ethiopian dominated enterprise seeking to protect Ethiopian interests at all costs. In 2014, Dr. Mehari Taddele Maru, an Ethiopian regional security expert and African Union advisor penned a piece in which he explained how the Ethiopian government went about securing a dominant role in the IGAD and using the organisation as a front for the pursuit of regional interests. The likelihood is that Colonel Gebregziabher was part of this effort and his work was rewarded with a virtually permanent position at IGAD.

However, in 2018 Ethiopia appointed Prime Minister Abiy Ahmed and Gebre’s luck finally ran out. The new leader sought to clean out the government of the ageing politicians who monopolized the country’s political sector since the nineties. A number of high profile dismissals saw not only veteran politicians, but the men in charge of Ethiopia’s military and intelligence institutions replaced with fresh faces. Unfortunately for Colonel Gebregziabher Alemseged, most of the new appointees weren’t even acquainted with him. With his final contract as an IGAD officer set to expire this, there was noone with considerable power and authority left in Addis Ababa that would vouch for prolonging the colonel’s IGAD adventure. General Samora Younis, his longtime colleague from not only the military effort in Somalia, but during the TPLF rebel struggle, was removed from his position as chief of the armed forces on June 9th. The colonel’s final IGAD contract would expire two days later.

It does appear that the colonel sought to extend his stay with the organisation. It would now require his being endorsed by the newer political personalities including the Prime Minister, whose appointments had just given the government a facelift. On June 13th, two days after his contract expired, the colonel was still attending IGAD functions in Addis Ababa and was present at an event welcoming the appointing of a new envoy to Somalia.

Between the IGAD greeting party on the 13th attended by the colonel and the humiliation of seeing his name and picture published in the Daily Nation, were two noteworthy events. The first was Abiy Ahmed’s June 16th state visit to Somalia where the Ethiopian leader met with Somalia’s President Mohammed Farmaajo for the first time. The two struck a deal to bring the peoples of Ethiopia and Somalia socially and economically closer than ever before. Exactly what else was agreed to might not be known, but what is known is that Mohammed Farmaajo despises Colonel Gebregziabher. Among the first orders of business when he was elected in February 2017 was sending Addis Ababa a request to remove him from Somalia. Farmaajo was well aware that the colonel was still involved at IGAD in destabilizing his country in a variety of ways and may have asked his Ethiopian counterpart to rid him from IGAD. Whether or not he did is up for speculation. But was is known is that days later on June 21st when Addis Ababa hosted an IGAD summit in which Farmaajo and other prominent leaders were present, there was no sign of Colonel Gebregziabher Alemseged.

To be excluded from attending such a high profile IGAD summit would be sending a clear message to the colonel that nobody in Ethiopia would be willing to stick his or her neck out for him anymore. With his former allies and connections no longer in positions of power, it would be up to the new administration. Prime Minister Abiy by this time had made quick work of the former establishment in forcibly retiring most of its key personnel. Seeking to dismantle the clique of yesteryear and write a new chapter in diplomatic relations with Somalia, Prime Minister Abiy Ahmed most likely thought that retaining the services of a man accused of war crimes in Somalia, was unnecessary.

The IGAD decision to publicize the dismissal in a Kenyan newspaper could be linked to this attempt to start things anew. The organization clearly seeks to shed its old image as a tight ship run by former members of Ethiopia’s TPLF security apparatus and render it more welcoming for Somalia and now Eritrea, back from political isolation. Either that, or the residue of the political overhaul in Ethiopia spilled over into the IGAD organisation.

“General Gebre” was clearly no longer compatible with the blueprints drawn up by the new Ethiopian administration, and has been disposed of. The man’s career as the extended arm of Ethiopia’s former intelligence chiefs in Somalia is well and truly over. But is this the last we hear of the former military commander? It’s hard to be certain. One cannot rule out the possibility of the ghosts from his past catching up to him as a growing number of Somalis demand he be put on trial for war crimes.

Ethiopia: Can the Tigray Conflict ever morph itself into regional crisis...