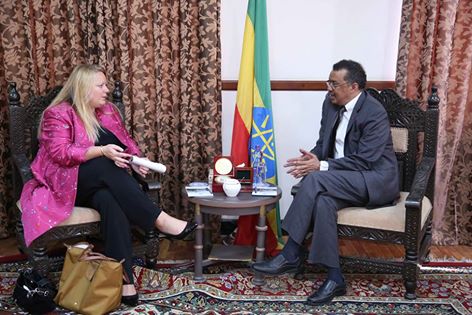 Addis Ababa (HAN) October 7, 2015 – Public Diplomacy and Regional Humanitarian initiatives News. Breaking News. The Ethiopian Minister of Foreign Affairs Dr.Tedros holds talks with the UK Foreign Office Director-General of Defense and Intelligence. They discussed  a new immigration centre to be run jointly by EU and Ethiopia officials to better identify migrants and refugees fleeing from Eritrea,
The Ethiopian Minister Tedros met with Ms. Sarah Macintosh, Director General of Defense and Intelligence in the UK Foreign and Commonwealth Affairs Office on Wednesday.
The also discussions covered bilateral issues of security, migration, terrorism and the Ethiopia-UK partnership on regional and global issues.
Ms. Macintosh explained the concerns of the UK on the current migration crisis facing Europe and expressed the UK’s wish to strengthening cooperation on migration and security matters as well as intelligence cooperation. Ms. Macintosh said cooperation between the UK and Ethiopia was of paramount significance for addressing a broad range of issues related to security and migration.
She noted that instability and terrorism in the region had certainly become an international threat and emphasized that global efforts were required to resolve these problems. A further strengthening of their partnership was needed to deal with such issues. Dr. Tedros, referring to what he called the exemplary relationship between Ethiopia and the UK, briefed Ms. Macintosh on current developments in Ethiopia.
He said ‪Ethiopia‬’s cooperation with the ‪‎UK‬ in the areas of security, intelligence, migration, and technical support was vital for Ethiopia’s efforts to achieve its ambitious transformation agenda and to help it lessen the country’s contribution to the migration crisis facing Europe. The two sides discussed the ‘push/pull’ factors causing migration and considered further collaboration on regional issues.