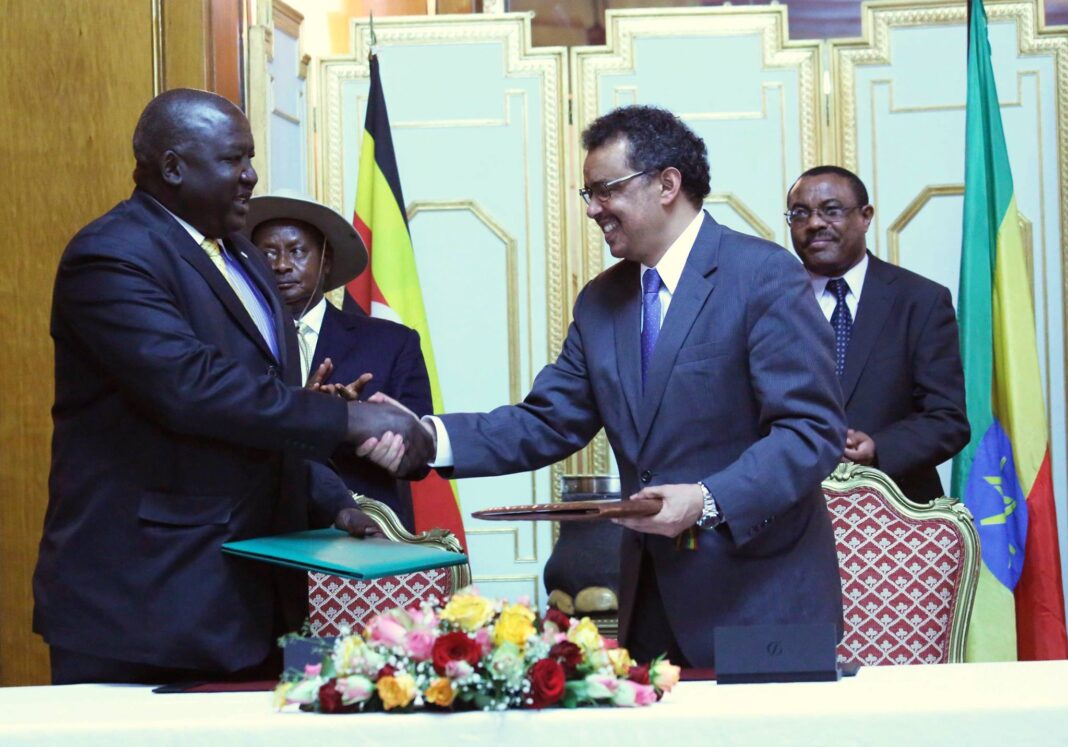 Therefore, an extra-ordinary high level Ministers and officials of Ethiopia and Uganda, led by Prime Minister Hailemariam Desalegn and President Yoweri Kaguta Museveni held high level consultation on Friday (December 26) at National Palace on bilateral, regional and global matters of mutual interest. Prime Minister expressed his gratitude to President Yoweri Kaguta Museveni and his delegation for the accepting the invitation to visit Ethiopia to which is aimed at strengthening the “exemplary relations” between the two countries. He also said that the President’s official visit would be instrumental in promoting and broadening cooperation on bilateral, regional, continental and global issues of common interest.

He further noted that both countries enjoyed historic and peaceful bilateral relations and expressed Ethiopia’s keenness to the furtherance and reinforcing of its ties with Uganda. He also stated that relations on political and social areas were commendable exemplifying excellent cooperative partnership. He further said that the two peoples of the two countries enjoy long history of shared culture, languages, among other things and belonged to one river basin, the Nile.

The Prime Minister said “Uganda has a clear stand on the equitable utilization of the Nile water resource by all countries of the Basin,” adding that Ethiopia appreciates and recognizes the role played by Uganda and the leadership of President Museveni on the Nile issue. He also indicated that this shared vision had been shown “through out the negotiation sessions of the Nile Basin Initiative which culminated with the signing of the Cooperative Framework Agreement.” He further emphasized that “With the imminent ratification of this Agreement by all its signatories we will enjoy unprecedented opportunities to use our comparative advantage for the betterment of the peoples of our sub-region.”

He also noted that meager expansion of infrastructure heavily reduced trade and investment ties in the sub-region, stressing that both countries need to undertake projects aimed infrastructure linkages as bridges of closer cooperation and partnership through bilateral cooperation and through the implementation of the IGAD Minimum Integration Plan. Noting the significance of the completion of GERD for the development of Ethiopia and the region, the Prime Minister said ‘Our power interconnection project with Kenya and beyond is certainly going on the right direction with funds from our development partners.”

The Prime Minister also expressed his hope that Uganda would be part of this interconnectivity and share the benefit of clean and cheap energy. The region was facing both new threats and encouraging results, stressing that fighting terrorism, poverty political crisis in the region necessitated practical cooperation between Ethiopia and Uganda. He also extended his thanks Uganda’s role in bringing stability to Somalia and to South Sudan under IGAD framework.

He also promised that Ethiopia would continue supporting the South Sudanese political groups reach a negotiated peaceful settlement. He also pledged that Ethiopia has a firm stand to support Somalia in its effort to bring durable peace and stability. President Museveni on his part noted the ancient linkages amongst the two countries’ peoples, similar geography, most notably; their shared resource the Nile and ideological fraternity between the leaders characterized the relations of the two countries.

The President added that cooperation between the two countries had so far yielded meaningful results in regional peace and stability and other areas of engagement but, he said, much remained to be done. He said that Uganda is keen to work together with Ethiopia in the areas of infrastructure, tourism, cross-border investment and trade. Following the consultation, the two leaders witnessed the signing ceremonies of MoUs on energy, transportation, health, and the establishment of sister city cooperation between Addis Ababa and Kampala.