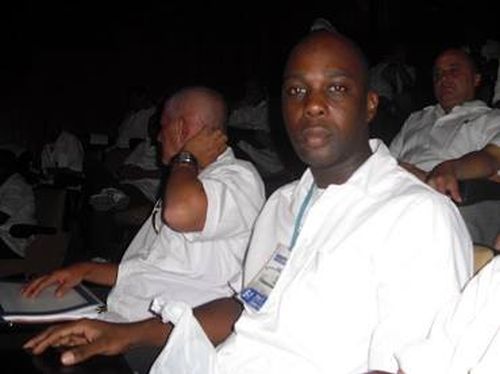 Addis Ababa (HAN) January 21, 2015 – Public diplomacy and Regional Security and safety news. Cuban Health Ministry announced the death from malaria on Saturday of Cuban nurse Reinaldo Villafranca, who was working with the internationalist medical brigade that is fighting the Ebola virus in Sierra Leone.

According to the information by Fasika Tadesse, Fortune Staff, the Ethiopian case, ´Anbessaw Haile Died of of cerebral malaria not Ebola´.  Did Anbessaw Haile die of cerebral malaria, as the Minister of Health, Keseteberhan Admassu (MD), claimed? An internal medicine specialist and lecturer at a government medical university that Fortune talked to says it is highly unlikely.

Anbessaw had been in Sierra Leone since November 2014, employed by the International Rescue Committee (IRC), which declined to say anything about him, saying that the case was being handled by the Ministry of Health (MoH). The environmental health graduate had been doing consultancy work before joining the IRC, including a brief stint with the WHO African Program for Onchocerciasis Control (APOC), according to his profile on Linkedin. He had also been officer for malaria and neglected tropical diseases for National Health Development in Ethiopia. Before moving to Sierra Leone, he had been working as sanitation and hygiene specialist for IRC, National Program, Ethiopia.

Anbessaw had a BA Degree from Jimma University in Environmental Health Sciences and MSc of medical Science, in Tropical and Infectious Diseases from Aklilu Lemma Institution of Pathobiology at Addis Ababa University (AAU).

Anbessaw came to Ethiopia in late December for a month-long vacation from Sierra Leone. He took an Ebola test at Bole International Airport after his arrival and updated the Ministry about his medical status via phone until last Sunday January 11, 2015. But he got sick on Monday January 12, 2015; he had a fever and was vomiting by the time he was taken to the quarantine centre organized for Ebola. He went into a coma the same night and died Wednesday morning, according to MoH.

Initial statement made by Keseteberhan had it that the Ministry had proved that the cause of death was cerebral malaria, which is caused by a protozoa called Plasmodium falciparum. He added that the blood sample had been sent to the United States for double checking. However, it was told during a press briefing on Friday January 16, 2015, at the MoH, that it was South Africa where the sample had been sent.

“We sent the sample blood of the patient for Ebola test to the South African laboratory, the National Institute for Communicable Diseases (NICD), and the result was negative,” said Dadi Jima (MD), director general of the Ethiopian Public Health Institution (EPHI) during a press briefing that was given for journalists.

The change of plans from the US to South Africa was made because it would be a 20 hour long flight to the US and Ethiopian Airlines only had one cargo flight a week to that destination, according to Dadi.

But neither could he have died of cerebral malaria, said the internal medicine specialist, who spoke on condition of anonymity.

“The patient could not have had immediate cerebral malaria that led him to death within 24 hours,” he said. “The disease has a symptom that is recognizable for three to 10 days before the patient gets into a critical state, unlike Anbessaw’s situation.”

The IRC declined to answer what kind of provisions they had in Sierra Leone to protect their staff from ebola and malaria.

“While we had isolated him in the quarantine, we also kept a total of 60 people from meeting others as we believed they had contact with the patient,’’ said Mer’awi Aragaw, special advisor to the Minister for public health emergency.

Anbessaw used to live alone at CMC, but he had met his sister and her family and his friends, a total of 36 people who were considered as immediate contacts. Additional 24 people believed to have met him were also restrained from moving. All of them were released as of Friday January 16, 2015, after the Ministry received the medical test result from South Africa, said Dadi.

“The ministry’s laboratory for Ebola gave a blood test and we got negative results; but we sent the blood out of the country as we wanted to be certain, since our laboratory is not accredited by the World Health Organization,’’ said Dadi.

“The incident was a great opportunity for us to learn about the situation as we had a gap of 15 days after the patient came from a place where there is Ebola,” Dadi said.

Anbessaw’s family were told to take his body after the laboratory results had ruled out Ebola as the cause of death, Dadi said.

Photo: Cuban nurse Reinaldo Villafranca, who was working with the internationalist medical brigade that is fighting the Ebola virus in Sierra Leone.