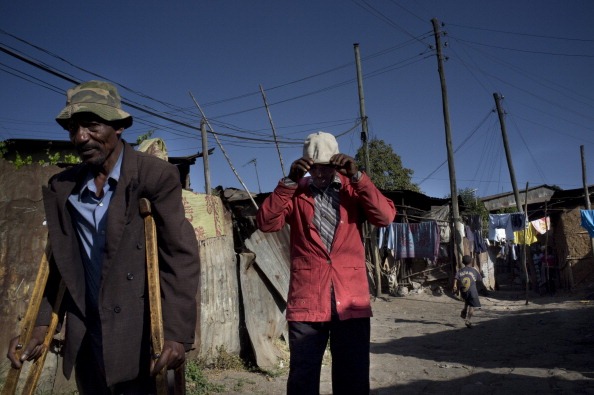 Addis Ababa (HAN) October 12, 2015. Public Diplomacy and Regional News.By Lucy Kassa The Bash Welde neighbourhood, found behind a tourist hotel on a side street adjacent to Adwa Street was as crowded as usual when Fortune paid a visit. The exception was the visible dominance of green and yellow corrugated sheet fences, which conventionally indicate ownership of the space that is being prepared for or undergoing a serious construction project. Despite the symbolism of the fences what one finds in the location are scattered, very old and gloomy houses but nothing that relates to the work in progress.

Living in one of them is Asrar Deno, 27 and his wife. Asrar, father of two, heads a family of five including his wife and siblings. This is the only home and neighbourhood they have known in 22 years. 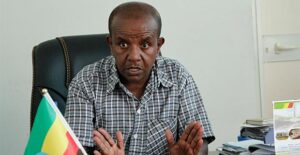 But a few years ago he was ordered to leave their home to make way for redevelopment purposes.

Beginning in 2012 the district administering the land, Arada District Wereda 09 informed residents that the land was required for a redevelopment programme and demolished all the neighbouring houses. His was spared because alternative housing was unavailable.

“I have no problem with the redevelopment programme but the time lapse amazes me; other houses have been demolished in this neighbourhood as long a eight years ago and nothing has happened. Instead the fence is quite a shade for both man and animals including hyenas.” The ‘human hyenas’ to which Aserar referred are gangs.

His neighbours, who make a living by selling injera and other small scale businesses, share his view.  Even if alternative housing were to be found, it would be far away from the city centre and the residents would be unable to earn their livelihoods as they do at present. They therefore see a completely dark corner when considering how they will adapt their lifestyles on their meagre resources.

Girma Mulugeta, land management head of Arada District,  partly admits the failure to follow-up the progress of the development of the construction investment.

“Once the people living in the lands selected for the redevelopment programme were relocated, the lands should not have remained vacant for years,” he agreed.

In the district he manages there are around 400,576Sqm of land allocated to three investors two of which are in Bash Welde Number One and the other in Piazza Churchill Avenue, around Banko Diroma. These lands were allocated after the adoption of Urban Land Lease Holding Proclamation Number 721/2011, a proclamation adopted with the rationale to bring appropriate and efficient urban land administration and address the increasing demand for urban land.

According to this proclamation which is applicable to all urban lands in the country, a person should be permitted to conclude a land lease contract with the appropriate body and the contract should include start up time for construction, payment schedule,completion time and a grace period among others.

The proclamation sets a time frame for completion of construction by providing 24 months for small construction projects, 36 months for medium projects and 48 months for large projects. But it still bestows the authority on the City Administration and Regions to determine which construction projects are large, medium and small. The City Administration therefore has the discretion to extend the commencement phase, looking at the complexity of the project and the implementation regulations of the proclamation. In any case the law states that the total completion period should not exceed two years for smaller projects, four years for medium and five years for larger constructions and it provided that if the construction is not completed within this time frame, the lease contract should be terminated followed by repossession of the land.

Despite this, the city in general and Arada District in particular,have multiple allocations that have not been utilised for the agreed development purpose. Currently there are around 104 plots allocated for different purposes in the district. In the last fiscal year around eight contracts were cancelled for not commencing construction despite repeated warnings and their case was submitted to the Land Transfer Office at the City Administration, according to Girma.

One of these allocated lands is the plot allocated to MIDROC Ethiopia Group in Piazza, adjacent to the City Administration.

“The district has given repeated warnings about this land. But it has been fruitless and beyond its control. Another warning was issued by the City Administration earlier in 2015 to commence construction after six months but there is no construction yet,” Girma said.

Recently the Arada District took a measure revoking eight lands lease agreements due to failure to invest, five years after the adoption of the said proclamation, that prescribes revocation in times of failure on the developer’s side. The eight developers included government agencies, four embassies and two local investors.

All of the lands were re-possessed by the decision of the City Administration’s cabinet, depriving the investors. The cabinet of the City Administration, however, has the prerogative to return or keep the decision of lower bodies like districts, after examining the case if the investor appeals. Decisions are passed on a case by case basis with no objective standards for reference.

Eskindir Habte, Arada District Land Bank Transfer office head tried to explain the process toFortune, based on his long experience and observation of such cases.

According to him externalities usually are pending court cases with  previous residents, whereas internal reasons that are reconsidered by the cabinet are personal problems of the investor including illness or incarceration, adding that if such reasons are given again and development could not begin within six months, the land would be revoked permanently.

With its myriad other matters, the City Administration had achieved the lowest performance to middle and higher industries last year, which was 9.1 hectares of land lower than its target of leasing 330 hectares of land.

This redevelopment plan is going to continue in a strengthened manner as there are lot of investors looking at these lands that have been allocated but not developed in the central areas. In the last fiscal year alone from 700 to 900 investors had submitted their proposals for areas in the centre of the city.

But the problem with the allocation of land as well as enforcement of the laws has another facet, which is the bases for allocation of lands. The proclamation noted that allotment of urban lands is only allowed to government budgeted entities, social service institutions like non-governmental organisations, places of worship, embassies, international organisations, manufacturing industries and public residential housing construction.


With regard to leased lands however the proclamation does not clearly identify the bases for how lands are allocated through lease. According to Eskinder the normal practice is that the cabinet decides the base considering their nationwide benefit.

“To allocate lands in the areas far from the centre of the city, the cabinet examines investments mainly in the manufacturing sector, which has enormous advantages for the country’s import substitution and increase of foreign currency reserve. Whereas when the allocation is in the central areas, it is not industries that are preferred. But still the basis will be the national benefit, and projects may include hospitals, luxury hotels and retail outlets of big industries,” said Eskindir. Before considering all the advantages the cabinet examines the area in the proposal of the land requesting body in addition to their investment capacity.

However the base is not consistent throughout the country varying from one regional state to other regional state. Two slaughterhouses provide an example. Jigjiga Export Slaughter House, established with investment capital of 100 million Br was allocated 350ha of land, while Allana, an Indian based meat processing company in Ziway, was given only 75ha, though investment capital was significantly higher and its slaughtering capacity greater. Addisfortune