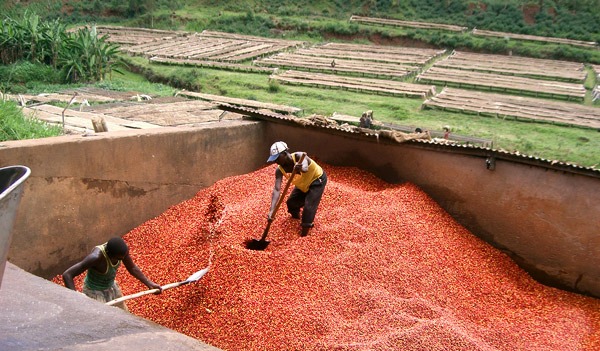 ADDIS ABABA (HAN) April 28, 2015 – Public Diplomacy and Regional Investment News. The Ministry of Agriculture (MoA), in concert with the Ministry of Trade (MoT) has finalised a Coffee Development Strategy that will be used to boost coffee production in the second Growth and Transformation Plan (GTP II) over the next five years.

The strategy, developed after a six-month study conducted by Agrear Consultant, is targeted at raising the current coffee production capacity of the country by four fold.

Agrear began the study in April 2014 and completed it within six months at a cost of 200,000 euros, availed by the European Union.

“The study was initiated by the belief that as coffee is a permanent plant, the trading should depend on quality and it should be supported by special extension programmes,” said Fikru Amene, coffee development director at the MoA. “We did not achieve the plan that we set for the GTP I, which also triggered the study.”

Currently, the export amount stands at 190,876tn as data for 2013/14 from the MoT indicate. This was far down from the plan of exporting 277,500tn of coffee to gain one billion dollars in revenue. The country was able to gain only 717 million dollars from coffee exports.

The country’s plan for the first six months of the 2014/15 budget year was to export 73,593.5tn of coffee and gain an income of 269 million dollars. The actual quantity exported was 73,227.9tn, from which a higher than targeted revenue of 307.5 million dollars was gained.

Ethiopia stands fifth in the world with a production capacity of 379,500tn, which, however, is only 4.5pc of the total supply in the world market in 2012/13.

In order to enhance the country’s production, the study, indicated that there should be structural reform, making coffee have its own Ministry; loans should be facilitated for the coffee farmers and traders; the marketing of coffee should depend on quality rather than quantity; old coffee plants should be pruned; and the work procedure at the Ethiopian Commodity Exchange (ECX) should be changed to allow international buyers to directly contact the farmers and buy the coffee from the farmers themselves.

“But, in order to maintain the quality of coffee and get better a price, we did not accept the recommendation to change the system at the ECX,” Fikru told Fortune.

The strategy can double the country’s number of coffee plants and quadruple production, thus impacting the export amount of the country by the end of the second fiscal year.

The Ministry has now identified 5 million hectares of land that has high potential for coffee production and the cultivation of coffee in the country is planned to reach two million from the current one million.

In order to make sure that the target is met, the Ministry has prepared half a million coffee seedlings, and 5,000qt of seed coffee to be distributed to the potential areas.The Ministry also plans to prune 400,000ha of low production coffee plants, and uproot 200,000ha of old coffee trees.

“The result will not come overnight as coffee requires at least four years to bear fruit; but if proper follow-up is made, the target will be met at the end of the period,” said Fikru.

In order to implement this strategy well, extension programmes were established up to the Wereda level, according to Fikru. Coordination with banks and large farms is also being facilitated in order to simplify loans and share experiences.

“The strategy is comprehensive,with a span from resource management to production and cupping; it enables follow-up at every step,” said Seifu Mulugeta, the export promotion director at the MoT. “The MoT will have a stake in implementing issues related to marketing.”

It will also address issues related to contraband in the coffee trading that is now being seriously followed by the government’s high officials including the Prime Minister’s Office, according to Seifu. addisfortune