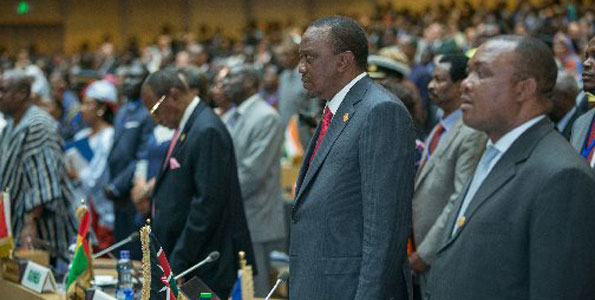 ADDIS ABABA (HAN) February 3, 2016 – Public Diplomacy and Regional Stability Initiatives News. The US-Africa Business Summit is underway in Addis Ababa, Ethiopia on Tuesday as African Heads of State and American business leaders meet with the objective of boosting trade and investment between the region and the US.

Underlining that the current volume of trade and investment between the two sides was not enough, Ethiopian Prime Minister Hailemariam Desalegn highlighted the need to increase economic interaction especially in productive sectors.

“Today Africa is rising. Africa’s future is very bright. I believe the summit will help you to discover the potential for investment and doing business in Africa,” the Premier told US business representatives at the opening of the summit.

Organised by the Corporate Council on Africa and held every two years, the 2016 summit is being attended by around 1,200 participants including CEOs of major US and African companies.

Reports show that challenges such as poor infrastructure and corruption have kept American companies away despite the continent being an investment magnet for other emerging economies such as China.

“The key for all of them [the participants] is to have vibrant discussions…That is the only way you can solve some of the challenges and hurdles that occur in terms of investing here in the continent,” Adi Raval, Senior vice president of communications and public affairs at US-based engineering firm Symbion Power told the The EastAfrican in Addis.

According to Mr Raval, despite these challenges, US companies have been slowly increasing their investment in the region over time.

Talba Alkali, director at Federal Ministry of Aviation in the department of safety and technical policy in Nigeria, also agrees with Mr Raval, noting that the United States has been active in supporting aviation infrastructures in the country.

“When it comes to aviation, we have always been in collaboration with the United States, especially in safety and security. I expect more of US Partnerships and their companies’ investment in Nigeria in the future,” he said.

Over the coming three days, the 10th biennial summit is expected to explore investment opportunities in various sectors in Africa and announce business deals.

According to US trade statistics, exports of merchandise to sub-Saharan Africa have steadily been on the rise, going up 58 per cent since 2009.

However, compared to Sino-African trade, the volume of US trade with the continent is small.

Despite this, the United States has remained one of the top providers of humanitarian assistance and development aid to Africa for several decades.

With the recent economic slowdown, China’s imports from Africa fell nearly 40 per cent last year, presenting a challenge to many African economies that rely on Chinese demand for raw commodities such as iron ore and oil.