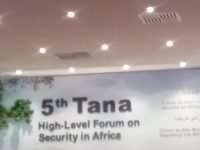 Bahir Dar (HAN) April 17. 2016. Public Diplomacy & Regional Security News. Been better for the Tana High-level Forum on Security in Africa taking place this weekend in the Ethiopian town of Bahir Dar. In a lengthy profile by journalist Jeffery Goldberg of The Atlantic magazine, Obama broke with convention and laid the blame for the almighty mess that was unleashed following the bombing and subsequent killing of Muammar Ghaddafi squarely on Britain’s David Cameron and France’s Nicholas Sarkozy’s failure to plan for the aftermath and lack of follow-through. Having stirred up a massive hornets’ nest, Cameron, he said, became ‘distracted’ and Sarkozy, who used the bombing as a macho chest-thumping gesture, lost interest and was, not long after, to lose the French presidency.

The irony is that African Union negotiators and political analysts have warned of just such an outcome, but no one ‘who mattered’ was listening. At last, the powers that be – or at least one of them – has had the courage to admit that military might does not equate to ‘knowing better’ and precipitate action based on wish fulfilment, or as Obama reveals so candidly in The Atlantic, on ‘what is expected’ rather than what is needed, can lead to an explosion of disastrous consequences. Some of these consequences are washing up on Europe’s shores as countries scramble to put up barricades against the human tide fleeing from brutal wars and the nihilistic destructiveness of the terrorist armies.

While Europe and the Americas search their souls over what to do with the mounting mass of suffering humanity banging feebly at their doors, Africa has had to deal with similar situations for decades. Ethiopia and Kenya have some of the largest refugee camps in the world but the resources at their disposal are shockingly meagre.

Meanwhile, the mess that was created by the bombing of Tripoli and the brutal, televised murder of Ghadaffi is still wreaking havoc in Africa. The ramifications of the scattering of the former Libyan army, composed to a large part by soldiers from neighbouring African states; the disgorging of thousands of tons of arms and ammunition from Ghadaffi’s arsenal; the destruction of all law, order and social norms in Libya; the dismantling of a thriving trading infrastructure centred around Libya and the creation of fertile environment for the worst of ISIL to occupy and thrive in, are still in full flow. The Sahel is now on fire. Extremism is on the march, sweeping like a scythe with its centre in Benghazi and slicing up countries, institutions, communities.

Boko Haram and Al Shabab, both of which had been described as ‘dying of thirst’ as their energy sources dwindled prior to the 2011 NATO bombing of Libya, appear refreshed and more dangerous than ever. Their appetite for committing atrocities has increased several degrees – while the poor girls kidnapped from Chibok have still not been found, an ever increasing battalion of little girls is being sent out to blow themselves and as many others as possible in a macabre frenzy of death.

This forms just one set of the consequences of poor decisions and precipitate action by forces far removed from the theatres of war over which they hold such sway. The price for someone else’s blunders is being paid by Africa in ruined economies, shattered nations, lost and destroyed lives.

Africa is now saying ‘Enough’! Even before the infamous Berlin Conference of 1884, which carved up Africa among the powerful European nations, the continent was seen as little more than an opportunity to exploit to the hilt and a backdrop against which European power struggles could be projected. The people, the land, the fauna and flora of Africa mattered not in the least except in terms of how they could be used for the ‘national interests’ of others.

Hundreds of thousands of Africans were killed and displaced during the two World Wars – fought over causes that had nothing to do with the continent and when this phase ended, a new and perhaps more deadly phase began – the Cold War as the West and the USSR fought their proxy wars. The pattern seems set to continue. Throughout, Africa’s voice has been shouted down. The continent is expected to provide the muscle and personal for peace-keeping operations once the UN steps in, but at the policy level, the critical agenda setting level, Africa has been politely ignored.

The theme for this year’s Tana Forum, the fifth, is ‘Africa in the Global Security Agenda’. The aim is to ensure that Africa finds its place at the international security high table and that it can share its accumulated wisdom on conflict resolution and peace building with the world. The format of the Tana Forum (the name derives from the fact that it is held on the shores of Lake Tana, in the city of Bahar Bar, in Ethiopia) is original and very African. The symbol of the Forum is the baobab tree, the traditional African meeting place during which conflicts are discussed, analysed and more often than not, resolved.

Nevertheless, the discussion level is pegged high with speakers selected for their outstanding expertise and experience in conflict resolution and peace building. For example, Kofi Annan, the former UN Secretary-General, will deliver the keynote speech this time around. Other participants will include Ethiopia’s Prime Minister Hailemariam Desalegn; Louise Mushikiwabo, Minister of Foreign Affairs, Rwanda; former presidents Thabo Mbeki (South Africa), Joaquim Chissano (Mozambique) and Pierre Buyoya (Burundi); Carlos Lopes, Executive Secretary of UNECA; Wolfgang Ischinger of the Munich Security Conference, Germany; Martin Kobler, special representative of the UN Secretary-General and Andreas Eshete, special advisor to the Prime Minister of Ethiopia. There will also be high level representatives from the AU, UN, The International Crisis Group, the Woodrow Wilson Centre, USA and several other organisations and institutions.
Versi wrote this as a preview of The 5th Tana High‐Level Forum on Security in Africa, holding on 16‐17 April 2016; at Bahir Dar, Ethiopia.