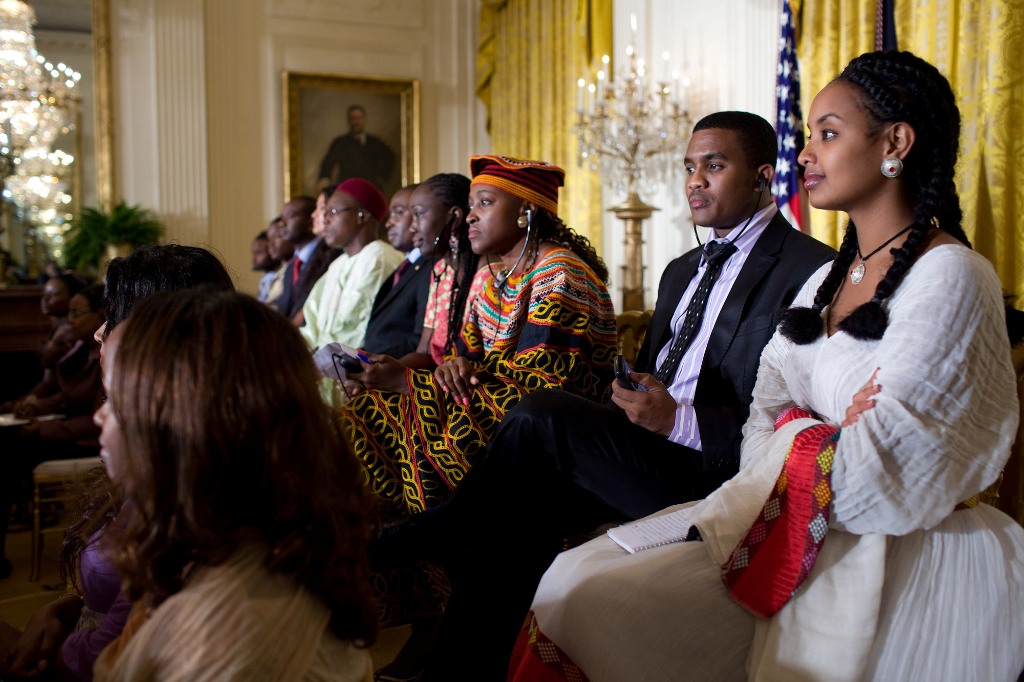 Abebe began his message with a positive note. “Mr. Obama, we Ethiopians love you. We demand freedom for Ethiopia,” he said.

“Hold on,” Obama told the man. “I agree with you, although why don’t I talk about it later because I’m just about to finish?”

But Abebe continued his message and loudly called for help to free jailed bloggers and journalists. “Stand with the people of Ethiopia

Later, the president told the demonstrator: “You kind of screwed up my ending, but that’s OK … We’ve got free speech in this country, which is great, too.”

The man, who did not identify himself to reporters, appeared to be supportive of Obama and handed out a letter he said he sent to the president about helping “the oppressed people of Ethiopia.”

In the letter, the man described himself as “an exiled journalist and freedom activist trying to raise the voices” of the people of Ethiopia.

Another Fundraising event: President Obama praised Never Forget’ into ‘Never Again’ foundation Wednesday that collects testimonies from Holocaust survivors, saying they are sending a warning to the future.

“The voices of those recorded and unrecorded — those who survived and those who perished — call upon us, implore us, and challenge us to turn ‘Never Forget’ into ‘Never Again,'” said Obama, the guest of honor at a dinner sponsored by the USC Shoah Foundation.

Steven Spielberg, the Oscar-winning director of “Schindler’s List,” established the foundation 20 years ago. Its video archive includes some 50,000 personal accounts of the Holocaust and other genocides.

In his remarks Obama said, “we cannot eliminate evil from every heart, or hatred from every mind — but what we can do, and what we must do, is make sure our children and their children learn their history so that they might not repeat it.”
David Jackson has been a reporter for more than three decades, and now covers the White House for USA TODAY

Full text of letter by Abebe

It is a great honor and privilege for me to attend this unique reception organized in your honor at  the Fairmont Hotel, San Jose.

There is probably no greater place in the United States than the Silicon Valley that truly exemplifies the transformative power of freedom. Transformative Silicon Valley companies like Facebook, Twitter, Google, Yahoo, Oracle and HP, are more veritable expressions of America’s power and dynamism than its military might.

Mr. President, can you imagine Silicon Valley if all the visionary innovators and dreamers that have made it possible are unjustly locked up in harsh jails to break their spirit and silence them? Mr. President, the answer is simple and obvious. Fortunately, the  United States is not ruled by mindless and ruthless criminals like Ethiopia.

Mr. President, as an exiled journalist and freedom activist trying to raise the voices of the oppressed people of Ethiopia, I can tell you that Ethiopians have genuine respect for this great land of freedom and your inspirational leadership. But it pains and frustrates me and millions of Ethiopians to see that for over two decades the United States has overridden its core values and forged a questionable alliance with the Tigray People’s Liberation Front, a terrorist group that has continued to oppress, massacre, jail, torture and displace defenseless Ethiopians.

So many Ethiopians were glad that you sent Secretary of State John Kerry to Ethiopia last week on a mission of promoting “democracy and human rights,” among other things. They were also pleased that Secretary Kerry demanded the tyrannical government to release Zone 9 bloggers including Nathnael Feleke, a young blogger he had a chance to meet and inspire last year in Addis Ababa. Nathnael, Eskinder Nega, Reeyot Alemu and  so many journalists, activists and dissidents locked up in rat infested prisons have committed no crimes except for dreaming about freedom, justice and equality for their country. Still worse, a few days after Mr. Kerry returned home, over fifty defenceless civilians have been gunned down and countless others have been detained and tortured for opposing land grab and displacement of the poor in Oromia region and Gondar.

The young men and women condemned confinement in dark jails are dreamers and visionaries that want to see the transformative  power of freedom, dignity and justice. Like Martin Luther King Jr., they too  have a dream that one day children of oppressors and the oppressed will sit together as citizens of a nation to decide the destiny and fate of their country. They do not dream of revenge and retribution but forgiveness and peace. As Secretary Kerry correctly said during his recent trip to Ethiopia, “Africans have an opportunity to bend the arc of history towards reform, not retribution; towards peace and prosperity, not revenge and resentment.” That is exactly what we aspire to see in Ethiopia, a country wallowing in the quagmires of poverty, tyranny and backwardness.

Mr. President, it is, therefore, with utmost hope that I urge you,  to do your level best not to compromise our freedom and dignity in exchange for short-term security concerns. While the security concerns of the United States in the Horn of Africa is understandable, forging alliance with a terrorist regime will have far more destabilizing impact in the long term. If this tyranny and terrorism continues unabated, Ethiopia will be another Rwanda or Somalia. We Ethiopians do not wish that to happen, a specter that is becoming more and more imminent with each passing day under the terrorist TPLF regime oppressing our people with impunity.

Mr. President, we remember your speech and promise to Africa that you made standing in Accra: “No person wants to live in a society where the rule of law gives way to the rule of brutality and bribery. That is not democracy, that is tyranny, and now is the time for it to end.”  Mr. President, we Ethiopians need to end the corrupt tyranny that has made our lives meaningless. Help us to end Apartheid and state-sponsored terrorism in Ethiopia at least by desisting from propping up those who are oppressing and tormenting our people.

Mr. President I loudly and clearly appeal to you to help Ethiopia move in the right direction. Yes, you can!

I sincerely apologize for the interruption and inconvenience. I do hope that you understand and stand with the oppressed people of Ethiopia.