Home Ethiopia Ethiopia: A Lesson of the Oromo Protests 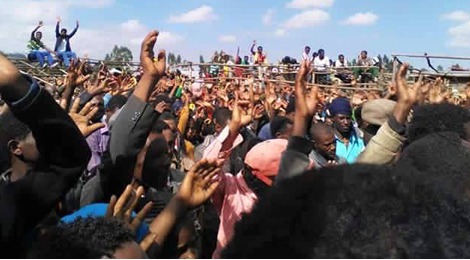 ADDIS ABABA (HAN) February 6, 2016 – Public Diplomacy and Regional Stability Initiatives News. By: Maimire Mennasemay. Since the recent Oromo protests in Ethiopia, a number of commentators have written on the need for unity, compromise, and reconciliation if a democratic Ethiopia is to emerge from the present turmoil. Indeed, for more than twenty years, many have criticized the misdeeds of the TPLF and the dangers of the ethnic political system it has imposed on Ethiopians. But there is an elephant in the room in all these discussions and criticisms. It is the issue of ethnic self-determination. We seem to shun it as if the TPLF interpretation of ethnic self-determination is the only possible one.

On the resolution of this issue hinges the possibility or impossibility of Ethiopian unity and democracy. Unless we articulate an interpretation of ethnic self-determination that meets the democratic aspirations of Ethiopians who consider the question of ethnicity too important to be swept under the political rug, exhortations to unity and criticisms of the regime will not bring us closer to unity or to democracy. To engage in criticisms and exhortations, however useful these may be, is not to offer an alternative.

The right step in the wrong direction

In the context of Ethiopian history, the TPLF took the right step in putting the issue of ethnic self-determination on the Ethiopian political agenda. The problem is that it took the right step but channeled it in the wrong direction by reducing ethnic self-determination to ethnic essentialism. TPLF policies are guided by the belief that “ethnicity is destiny”. Hence, the bolting of every ethnicity into a specified territory—the kilil—and the obligation to identify one’s ethnicity on identity cards. As the absence of trans-ethnic solidarity with the recent Oromo protests shows, ethnic essentialism de-humanizes Ethiopians by making them mere samples of their respective ethnies, locked in their ethnicity, and unable to co-operate with each other.

In light of the TPLF’s distortion of the principle of self-determination, one would have thought the opposition parties would develop an alternative interpretation of ethnic self-determination. If they had done so, they could have wrested it away from the TPLF and made it a rallying point for unity and democracy. They did not do so. On the contrary, many of the opposition parties organize themselves ethnically, implicitly espousing TPLF’s policy of ethnicity as destiny.

“If one uses the political language of one’s adversary to challenge him, one has already lost the struggle”, runs an ancient adage. In implicitly espousing the TPLF’s interpretation of ethnic self-determination for organizing themselves, the opposition parties lose the struggle against the TPLF before they even start it. What is left then are political skirmishes in the “electoral” game that the TPLF organizes within the barricaded ridings of “ethnicity as destiny”. No wonder, the TPLF and its EPRDF clones win every election.

An even more distressing consequence of the failure of the opposition to develop an alternative understanding of the principle of ethnic self-determination is the fragmentation of the popular struggle against the TPLF, as we have seen in the recent Oromo protests. Many have asked: why have other ethnicities failed to join hands with the Oromo protestors? Such an act of solidarity would have given the protest a national momentum that could have advanced the prospects of democracy. Some have explained this absence of solidarity by the lack of unity. But this begs the question.

The real question is: what prevented the others, especially the Amharas and the Tigreans, from joining the protests? The answer is: the total absence of a unifying goal. Deprived of an alternative interpretation of ethnic self-determination, each group sees the protest of the other through the ethnic ideology of the TPLF. Each says: it is their protest, not ours.

I would like to draw the attention of those who believe in unity and democracy to a basic question: Is it possible to develop an interpretation of ethnic self-determination and Ethiopian unity in a way that makes each the democratic moment of the other? This basic question may be unpacked into two substantive questions.

How do we persuade Ethiopians who believe in the principle of ethnic self-determination that there are ways of implementing this principle and ensuring at the same time the eradication of political, economic and cultural exclusions without resorting to ethnic essentialism?
What kind of political institutions and territorial organization do we need to implement the principle of ethnic self-determination in a way that makes all of us voluntarily accept our identity as Ethiopians while at the same time being proud and confident enough of our ethnicity such that we do not succumb to the desire to essentialize and territorialize it as a way of self-protection?
Only when we have concrete proposals to meet the concerns expressed in these questions could we have a goal to which all Ethiopians could rally. Only then will we stop saying: it is their protest, not ours.

Against the two fetishes

What is needed is an articulation of ethnic self-determination and Ethiopian unity in ways that do not fetishize either ethnicity or Ethiopia. Currently, for some of us, the fetish is our ethnie; for others, the fetish is Ethiopia. We need is to go beyond these two fetishes. At the moment, we are nowhere near such a political turning point.

If we fail to develop an interpretation that embraces ethnic self-determination as a democratic moment of Ethiopian unity and Ethiopian unity as a democratic expression of ethnic self-determination, neither unity, a precondition for democracy, nor democracy have a future in Ethiopia. Ethiopia will be trapped in a permanent state of intermittent local, isolated and disconnected protests and conflicts, as we have seen over the last twenty years. Such a condition serves the interests of the TPLF but not the democratic interests of Ethiopians, whatever their ethnicity may be.

For those who want unity and democracy, the lesson of the Oromo protests is clear.

As long as we do not develop an alternative that recognizes the principle of ethnic self-determination and that implements it in ways that make ethnic identity a legitimate expression of Ethiopian identity without essentializing and territorializing ethnicity, unity and democracy will remain pipedreams.

As a consequence, we will continue nursing our favorite fetishes – our ethnie or Ethiopia. And the TPLF interpretation of ethnic self-determination will continue its hold on those Ethiopians who reject, rightly so, the old idea of unity, however it may be dressed up in the rhetoric of democracy and solidarity.