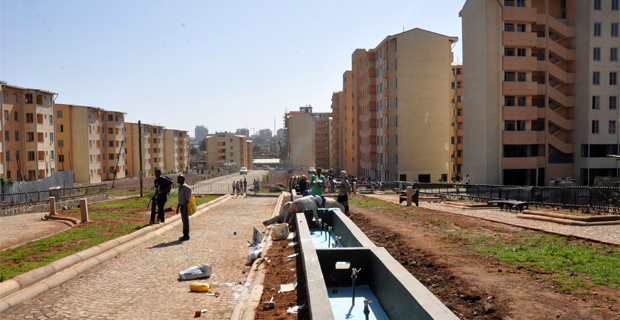 ADDIS ABABA (HAN) August 24.2016. Public Diplomacy & Regional Security News. By Yared Gebremeden. Housing development improving the image of the city. Last weekend, I was visiting the construction progress of the 40/60 housing development programs at different sites of Addis Ababa. In some of these areas like Sengatera and Crown- Kaliti, the construction process seems to be at the final stage except some remaining finishing works. However, anyone can grasp still uncertainties on the exact date of transferring the already completed houses.

According to the Addis Ababa Saving Houses Development Enterprise, more than 1,292 condominium houses under the 40/60 housing scheme have been finalized at this moment. Specifically, those of Sengatera and Crown-Akaki-Kaliti sites have almost been finished. Installation of power capable and water pipeline has been commenced at both Sengatera and Kality Crown sites.

The other amazing fact about the issue is that 154,000 of the 164,000 people registered under the scheme have been saving money every month. Out of these people, close to 13,000 people have already paid the total amount. And it was often said that those who paid 100 percent will have priority when the condominium units are handed over or transferred to the home owners.

Many people saving for the 40/60 housing program on a monthly basis especially of government employees usually raise quests for justice. The main point they raise is that the program should not be discriminatory. They also said that the government should not be business oriented as housing is a basic human right that should not be based up on the amount a person could pay at once.

But officials of the housing program said that the 40/ 60 housing program is a special program which needs a huge finance. And the government needs money to accomplish the project. And one best way of undertaking the program is through giving priority to those who could cover the amount at once so that the money will also be used to expand the projects for other customers who are saving on a monthly basis.

The other issue that is usually raised is the fact that these programs are lagging behind their contracted schedules. In this housing scheme, local residents are required to save 40 percent or more for upfront payment, with obviously those who have saved more presented with a better chance of getting a house. Ethiopians from the diaspora have to pay the entire purchase price upfront.

The Enterprise announced recently that the status of housing projects across 13 sites is on going at a different pace. And most of the commenced constructions in 2013 and 2014 are running far behind their scheduled completion dates.

The 1,292 houses at the Sengatera and Crown sites, in the Lideta and Akaki Kality districts, have reached over 97 and 95 percent completion, respectively, at this time. But they were expected to be fully completed before the time. But, according Communications Department of the Enterprise, these houses are ready for transfer to owners now.

The delay in completing the 40/60 houses are usually attributed to the incomplete infrastructural works, including roads and electricity, shortage of reinforcement bars, cement and gravel as further reasons. In fact, despite better prices being offered to gravel makers, they were still not supplying an adequate amount.

Currently, the Enterprise is planning buildings taller than G+18. So far, the Enterprise has already begun the excavation work for the construction of the G+18 buildings. High rising buildings up to G+24 buildings are incorporated in the new plan. According to the plan, no additional G+7 or G+9 buildings will be planned in the future in order to use the land efficiently and to accommodate more houses and people.

Housing is becoming the most complicated social problem especially in cities like Addis Ababa. For instance, when we take a look at the people registered for housing even before two years in all the housing programs in the city, they are estimated to reach over 1 million. And out of which those registered for the 40/60 housing programs are about 164,000. And the project is special in that it is targeted to changing the image of the city as it is one aspect of the city’s renovation program.

The main purpose of all housing programs are just satisfying the housing need of the public. And the other objective is to create cities that are free from slums in the near future. The 40/60 housing program is one among the projects that are mainly aimed at building condos that are high rising up to 24 floors in length and build the city to be one among the major cities in the world.

Currently, there are 38,790 condominium units that are under construction on 13 different sites. However, due to poor capacity of contractors and consultants, and inadequate government supervision, most of the projects are behind schedule. Only 1,292 housing units are now nearing completion. The enterprise, facing serious backlash for delaying the delivery of condominiums, is targeting to build close to 80,000 new condominium units under the 40/60 scheme over the next five years.

The construction of 38, 790 houses in the program are reported to be in the process of construction until the end of the Ethiopian last budget year on over 200 hectares of land. The program has created a total of 21,340 jobs so far and it is creating jobs for more than 10,000 citizens every year. And market link of over 208 million Birr has been created for Micro and Small Scale Enterprises and Associations from the program which surpasses the amount with more than 139 million Birr when compared with the amount from same time last year.

It was on Thursday Last weekend that City Government of Addis Ababa Saving Houses Development Enterprises has organized a visit program for the 40/60 housing programs of Addis Ababa at five different sites in the city for the Ethiopian diaspora community. Tourist, Ehil nigede, Bole Bulbula, Crown and Sengatera are the sites visited during the day.

According to Desalegn Taye, Head of Branch 1 project office in the Enterprise the construction of over 39 thousand houses is well in progress at the moment. “The first pilot projects comprising 1292 houses are nearing completion now.”

The Head said close to 38, 000 houses are planned to be transferred to the beneficiaries over the coming two years time.

The 40/60 housing program has a better facility than the other housing programs as it will be full pledged with trade centers, better sanitary and ground electric systems having a comfortable play ground for children. The buildings in the 40/60 development programs have 7-18 floor typology as of now.

Dr. Muse Bekelle, one of the Ethiopian Diaspora who came back to Ethiopia after 20 years, was amazed by the change that he has seen in the areas of housing envelopment and in other development endeavors as well.

According to him, the perception he had before is completely different from what he saw during his visit of the housing program and the overall development progresses in the nation.

It was concluded by all the visiting delegates during a wrap up discussion at the end of the official visit that the Enterprise have gone so far due to highest government commitment even if there are limited human and capacity resources. And the officials of the Enterprise have called on the Diaspora to collaborate with the government of Ethiopia with their knowledge, Skill and finance to achieve more on the area.