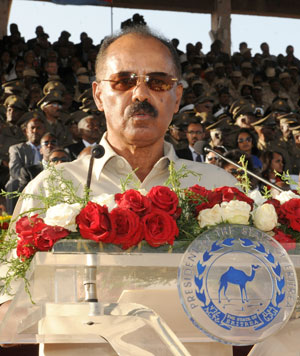 In a speech he delivered on the occasion, President Isaias Afwerki underscored the paramount significance of continued resolute defiance of external hostility and other anti-Eritrea agendas, in addition to nurturing the spirit of unity, harmony and cohesion. He further underlined the cultivation of displaying continued resilience, patriotism and sacrifice, hard work, productivity in the face of enemy challenge. President Isaias also underlined the need to keep intact the glorious legacies that constitute the hallmark of our national values.

The Chairman of the National Holidays Coordinating Committee, Ambassador Zemede Tekle said that the preparations to colorfully celebrate the Silver Jubilee Independence Day took months and the strong participation on the part of experts, artists, athletes, youth, students and other stakeholders has been witnessed.

The celebration highlighted different cultural and related performances by Eritrean artists from inside the country and abroad as well as shows by cultural and musical participants from 12 African, European, North American and Latin American countries.

The Independence Torch that has been on a nationwide tour in connection with the Silver Jubilee Independence anniversary was part of the colorful celebration.

On arrival at the Bahti Meskerem Square, the torch received warm welcome by thousands of nationals from inside the country and abroad as well as friends of Eritrea who were present at the impressive celebration.(For full text of the President’s speech, click here)