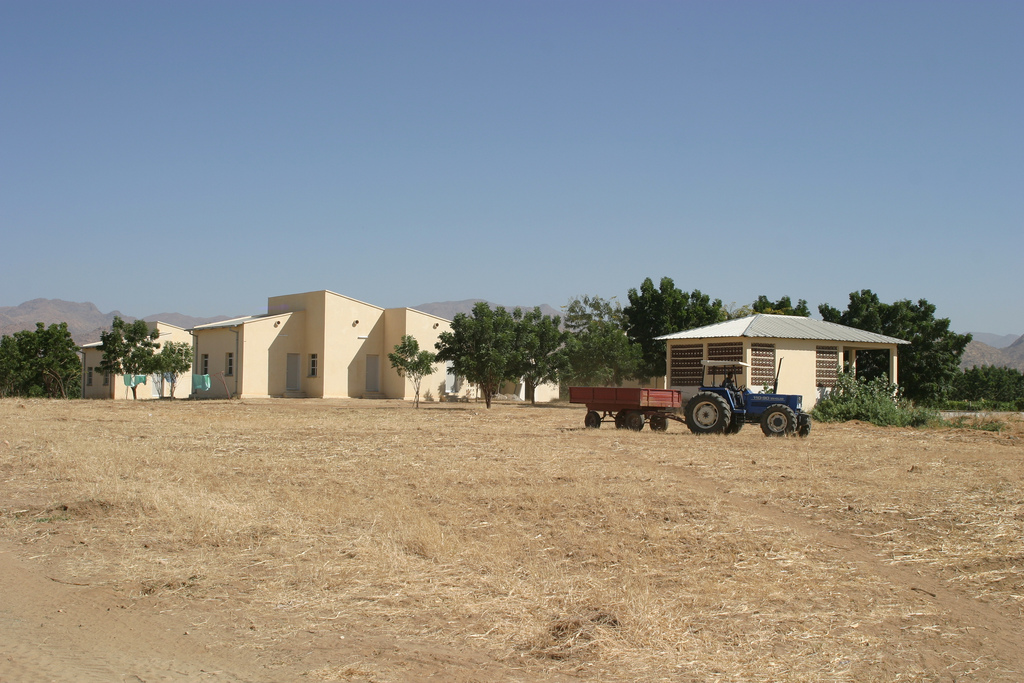 NARIOBI (HAN) April 10. 2016. Public Diplomacy & Regional Security News. BY: Berhane Woldu Asmara’s morning Sun had inflamed, increased with greater intensity felling more like mid-day thirty eight Diaspora’s from USA and Europe set to Anseba
and Gash Barka Region for a four day trip organized by Eritrean American
Community. What came to my mind was the “El Nino” effect of draught and
expecting to see a desolated, deserted land and starving animals. To my
surprise and contrary to my taught the land and herds were in good shape
the cattle as big as a buffalo.

To avert draught and expand farming the Eritrean government has constructed strategic dams in major river basins and potential catchments for the purpose of increasing the land under irrigation. The nationwide soil and water conservation programs have been
on going to revitalize the environment and boost potential of the
agriculture sector. The Government has been vigorously investing in varies
water harnessing mechanism and climate smart agriculture. Western low lands
Agro-industries; Gereset, the two Fancos, and the newly constructed
agro-industry Kerkebet were our destination to wetness the development on
the ground.

Keren is one of the picturesque old cities in Eritrea located on the rocky
plateau of the Anseba region. Keren is famous for its distinctive
residential architecture, mosques and churches. The houses are astounding
with their rough exterior view and high stone fences that contrast with the
pretty inner yards and the unique coziness. Having breakfast at Keren was
enjoyable. With full stomach we headed to Bisha a mountain landscape that
is part of Arabian Nubian Shield a large stretch of mineral deposits of
gold, copper and Zinc. As we approached the gate we meet up with Ms. Melena
Berket who welcomed us facilitating our tour of Bisha Mine. Bisha Mine is a
modern mine that generates Two hundred million dollar a year not a large
source of income, but a hub of technology transfer a learning center for
young Eritrean college graduates. In Bisha the experts that we meet were
young Eritreans who have taken over jobs form expatriates. These young
people explained to us the working of the mine; the engineering,
environmental impact and that Bisha will last until 2025 with two future
projects that are underway Harena and Mogoraib River basin Mining projects.
After a light lunch we left Bisha headed to Agordat a beautifully serene
landscape a small city. The houses are few in number and are built on both
side of the road leading to Mogoriab, Sawa and Kerkebet. We stayed in a
hotel that had six rooms and an outdoor sleeping area for 30 beds nice
dinner and breakfast to your liking. Heading to Kerkebet we drove through
Tekreret, Land of Awashiate, Herbet-kurboye, Kerue, Adi-hamete. These small
villages a monumental of Eritrean natural architecture huddled on the
Northern flanks of Sahel Mountains. Built on the banks of rivers narrow
cobblestone houses, school, clinic with high fences, and shops has the
unique feel of heavenly village. where one can find peace and quiet being
carried away back to a world long gone. Passing these spectacular
landscapes we arrived at Kerkebet Alemayet sub zone rich in ecotourism and
natural attraction.

To promote sustainable development based on climate smart Agro-based
industries The Eritrean crops, fruits, vegetables and live stock cooperation
has taken over several agro-industry projects Kekebet agro-industry is one
of them. With a water capacity of 130 million metric cubic of water and
hundreds acres of cultivatable land the Kerkebet agro-industry has become
the largest agro-industry in the Anseba region. Having tested on a several
thousand acre of land wheat, maze, Taffe and other cereals as well as
vegetables for suitability of soil and climate Kerkebet is expanding into
large agro-industry. Drip, splash and other suitable water system are being
used it has also included animal husbandry and fattening. Its ones dream
come true to see the Kerkebet area that was a barren land a few years ago
changed into a large agro-industry city with abundant of water,
electrification and its own helicopter landing. Completing our visit of
Kerkebet we drove to a small city called Afhimbol where we eat lunch. The
restaurant with its outside sitting was pleasant the food hot spicy with
aromatic herbs; variety of vegetable dishes and caprito (goat meat) eaten
communally was a ceremonial lunch.

Arriving in Tesensy a larger city and a commercial center with its two four
star hotels abundance of water and electricity was our next destination for
agro-tourism. There are several large agro-industry centers in Tesenay
sub-zone. Gerset, Fanco Rahwye and Fanco Tsume are located in this subzone.
Upon arrival we were welcomed by two young men experts in agriculture.
These young men explained that Gerset agro-industry has three different
dams that supply the farm with a capacity of 65 million metric cubic of
water. Gerset has been a functioning farm for several years with different
kind of cereal crops, vegetables, sugarcane, cotton and fruits. Gerset is
cultivated with orange, lemon, mango, papaya and palm trees that have
started to yield date and citrus fruits. It also has cattle ranch, over ten
thousand sheep and goats are nourished and housed in Gerset. Gerset Agro-
Industry has opened employment opportunity for 3,000 local residents who
otherwise would be house wives sitting home doing house chore. The city of
Gerset has transformed from a back ward village to a modern village with
all the social services in place. Gerset village which is adjacent to the
farm has a church and a mosque telling of the communities’ diversity and
harmony. Fanco Rahwe and Fanco Tsemue have planted citreous fruits,
vegetables, onions, red pepper and tomatoes; the two Fanco farms are
suppliers of tomato to Alibu Bantom factory for export. Our group was
fortunate to have arrived at Alabou while Banatom was in full gear;
offering us opportunity to see how tomato pastes was produced packed and
shipped out for export. Our four day trip however short gave us a good
understanding of Eritrean governments priorities in its economic
development strategy. Food security, rural development and wide spread
social justice.

The Western low lands have not only become the agro-industry hub of Eritrea
it has also offered us the agro-tourism industry, changing agent of the
echo-system. Eritrea is a rich country in terms of diversity of plants and
animal life. These resources have created a ground for nature based
ecotourism. Flora due to the constructed dams and varieties of climate,
level of precipitations and evaporation has allowed the territory of
Eritrea to be rich in indigenous flora. Fauna-Eritrea spectacular wild life
have benefitted from greenery and water abundance converting the land as a
habitat for rare and endangered species of animals.

In summation; at the end of the four day trip everyone was in agreement
that the Eritrean government and people are working hard in developing the
Nation and that Eritrea has gone through an economic transformation from
traditional farming economy to agro- industrial farming. Anseba and Gash
Barka region farming and grazing of animals coupled with large dams that
support the Ago-industries with its modern industrial equipment are
achieving the desired outcome and has started to pay off averting the El
Nino draught, with ample food supply and creating a favorable climate for
an economic boom in the agricultural sector.