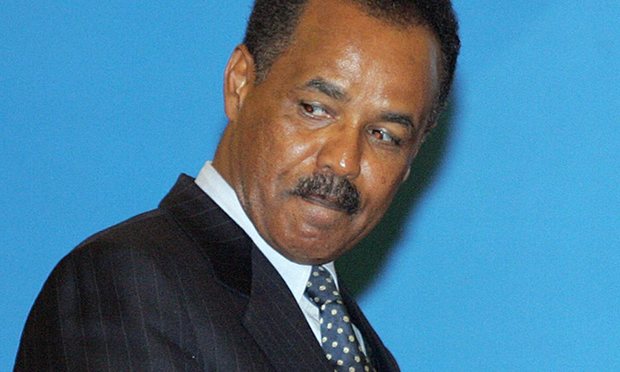 The rallies were held in the capital, Addis Ababa and in six other refugee camps located near the Eritrean border.

Organizers told Sudan Tribunethat the demonstration is part of the ongoing world-wide anti-regime protests against human rights abuses committed by the regime in Asmara.

“We are all gathered here to express our Support for the new UN commission inquiry’s report released recently which accuses the regime of crimes against humanity since” one of organizers told Sudan Tribune.

In Addis Ababa, Hundreds of Eritrean asylum seekers demonstrate in front of the head quarters of the African Union demanding justice is served to what they sad was over the unfolding human right violations.

The demonstrators chanted slogans against the Eritrean regime, and particularly against the President Isaias among others: “end repression in Eritrea” “Isaias must go” and “Isaias to the ICC.

UN human rights investigators recently accused Eritrean leaders of committing crimes against humanity, including enslavement, rape and torture and called the president and other perpetrators are tried by the international Criminal Court.

Samson Yemane, one of the demonstrators told Sudan Tribune that he fled to Ethiopia two years ago risking his life crossing the heavily guarded Eritrean border where there is a shoot to kill policy against any one trying to flee.

Teklegabir Fisseha another protester said he was jailed for two years in Eritrea on suspicion of dissent and soon after he was released he decided to take very dangerous journey to Ethiopia through Sudan.

He says many innocent citizens are languishing in prisons for a crime they haven’t committed.

Currently there are estimated 5-10 thousand political prisoners in the reclusive east African nation.

According to Tekegabir many young Eritreans on daily bases are being killed by border guards while trying to flee to neighboring countries to escape political repression in their home country.

Other demonstrators told Sudan Tribune that they staged the demonstrations for the international community to hear their voices over atrocities made by the tyrannical regime back home.

Eritrean refugees are one of the largest groups trying to cross the Mediterranean Sea to Europe.

According to a UN report, during the past two decades 360,000 Eritreans have left their country to exile, also thousands died while trying to cross to Europe in a dangerous sea routes.

In 2015 over 40,000 Eritreans applied for asylum in Europe, according to UN. Eritrea has an estimated 5 million population.