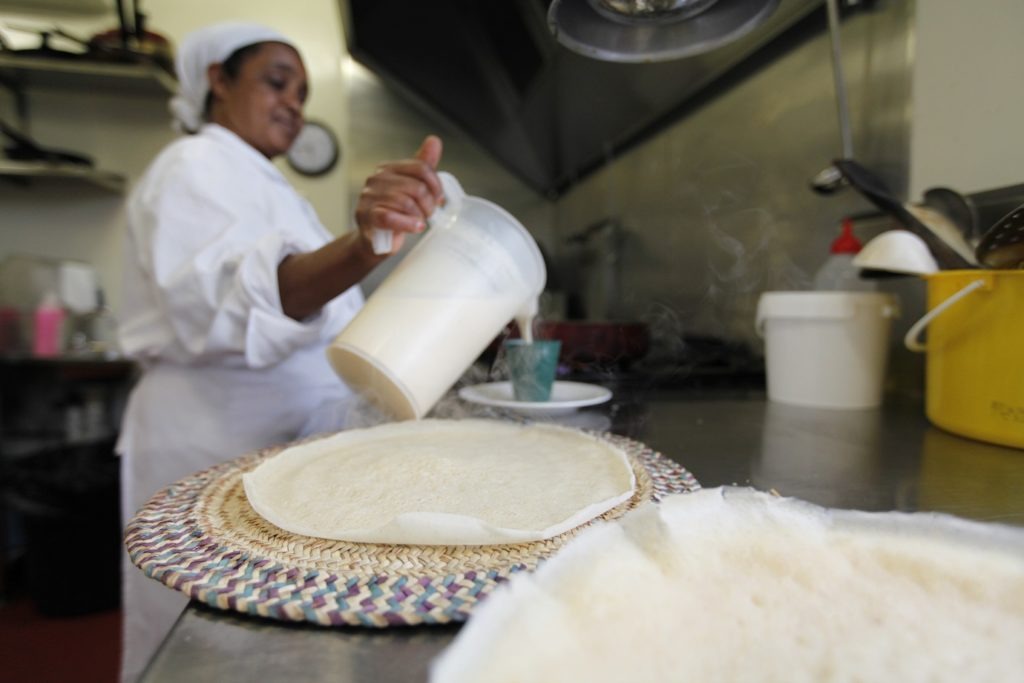 We’re profiling female cafe and restaurant owners over the next few months, thanks to the support of Uber Eats. These women are running incredible and innovative food businesses all over Australia, but many have been doing it tough due to the pandemic and in some areas the bushfires.

Here, we meet Saba Abraham, who owns Mu’ooz, a not-for-profit restaurant in Brisbane specialising in Eritrean cuisine. She shares how the restaurant has helped more than 200 refugee and migrant women gain vocational training and earn award wages, and also offers insight into her childhood as a freedom fighter for the Eritrean Liberation Front. Before opening a not-for-profit Eritrean restaurant that has helped transform the lives of several refugee women in Australia, Saba Abraham was a freedom fighter.

She was the second youngest and only girl in a family of seven brothers.

Five of them were freedom fighters for the Eritrean Liberation Front (ELF), which she joined at the age of 14.

She began by helping to disseminate information about the liberation and collecting money for support but eventually faced armed combat.

“It was very dangerous,” she said.

Saba’s deep passion for women’s rights, freedom and democracy was seeded at an early age with her family heavily involved in fighting for these causes.

“My parents were exceptional,” she said.

“My mother didn’t have an education [but] her father taught her how to read and write.

“She was very religious but a conscious religious person [who] taught us to see the human first, accept differences and not be biased.”

When the ELF fell under attack and civil war broke out in 1980, Saba tragically lost two brothers in the conflict.

She was also balancing her fight for social justice with motherhood.

Fearful for her daughter’s life, she decided to flee and they eventually ended up in Cairo where she was able to apply for a refugee and humanitarian protection visa that allowed them to start a new life in Australia.

“I was hungry for peace and freedom,” she said.

When she arrived in Brisbane, Saba felt like she was in a dream.

Wowed by the democratic rights people had, the welfare system and access to education, Saba felt deeply blessed and wanted to do something to give back.

“I felt inspired,” she said.

“This is a great country.”

How the restaurant industry can empower the most vulnerable

As she settled into life in Australia, Saba worked on a number of initiatives to support some of the community’s most vulnerable new residents.

Working with government and non-government organisations, she could see how tough life was for refugee and migrant women who did not speak English, had little to no education and no work experience.

On top of that, she said, many of these women were also living with the trauma of conflict and poverty so would often be left stuck at home unable to navigate their new world.

“They really suffer in Australia,” she said.

To help these women break out of their homes, build confidence in themselves and gain freedom of movement, Saba opened Mu’ooz in 2003 with the Eritrean Australian Women and Family Support Network.

“Food is the centre of human connection,” she said.

“Food can create a positive common ground for humanity and it gives us the opportunity to exchange the culture we have.”

Saba said about 98% of the women who eventually leave the restaurant end up in other jobs.

“The majority of the women who work at the restaurant are illiterate,” she said.

“We use their cultural skills which is cooking and give them on-the-job training.

“It is practical learning because they cannot read and write so while they work, they learn the language.”

Healing, growth and recovery in 2020

After everything Saba and the women at Mu’ooz have been through, the pandemic came as a massive blow.

“It was really very scary.”

To protect her team from the overwhelming uncertainty of what was happening, Saba kept them engaged by using the time to upskill, update the restaurant’s interior and develop a new line of products to add to their takeaway range.

In September, Mu’ooz launched three brand new takeaway products that could be used in everyday dishes: Zighni mixes onion, red chilli, herbs and tomato to create a slightly spicy sauce for traditional meat dishes, Brusn is a vegan sauce that can be used in meals like red lentils and Tefmi is a clarified butter with herbs.

Looking ahead at the months to come, she said, their entire focus would be on growth and recovery.

“It’s not just about money,” she said.

“It’s a place for connection, community, independence, empowerment but above all it’s about healing.”

Looking back at her incredible journey from Eritrea to Australia, Saba’s life calling has never once wavered.

She has always fought for a world where more women can break through the chains of “just being a mother and wife” to contribute, design and build a brighter future for themselves and their communities.

“Social justice is my passion, my philosophy, that’s something I want to fight for until I die,” she said.

“For me, the core question that has to be answered is women’s social economic empowerment.”