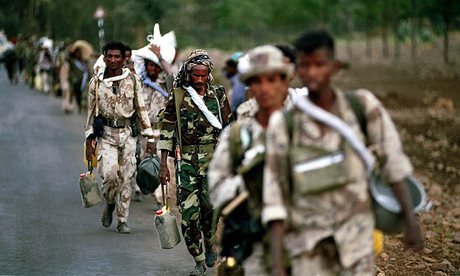 As a result, 14 conscripts were killed and several others were wounded, the Ethiopia-based Eritrean opposition group said citing to its credible sources from inside the Red Sea nation.

Some of the recruits died hours and days later from injuries they suffered in the shooting.

Unknown numbers of the young conscripts have also managed to escape from the convoy.

Following the incident armed police are said to have continued raiding residents and venues in a bid to hunt-down those escaped.

According to Eritrean opposition media outlets, the conscripts were en-route from training camps in Western Eritrea to the town of Assab where they allegedly were being deployed to work at a planned Assab-Massawa road construction project.

Civilian casualties were also reported after some of the recruits’ friends and relatives used a bus to block the road in a bid to help them escape.

Eritrean opposition news outlet, Gedab said the escape attempt took place in Shuq, in the crowded down-town Asmara where many friends and families of some of the conscripts had been waiting for them to help when they jump off the trucks.

The drivers are said to have been given strict instructions to not stop under any circumstance while crossing the capital but friends and families of recruits used a bus to block the convoy when they saw them approaching.

Eritrean authorities have not yet commented on the alleged incident.

Although the law limits the national service for 18-months, president Isaias Afeworki-led regime in Asmara however uses conscripts to indefinitely serve as labourers in state-owned projects including in construction and mining projects.

Referred by right groups as the North Korea of Africa, the reclusive Red Sea nation is one of the world’s most repressive states.

Currently there are some 10,000 political prisoners in atrocious conditions in different prison facilities across the country where they remain subjected to different forms of abuses.

The government uses arbitrary arrest and detention without charge to crush all opposition and to silence any sort of dissent.

Moreover, any one who attempts to challenge President Issaias Afeworki or who tries to criticize his government will be jailed without trial in a harshest condition.

According to a UN rights commission those human right violations which are being committed under the authority of the Eritrean regime may constitute crimes against humanity.