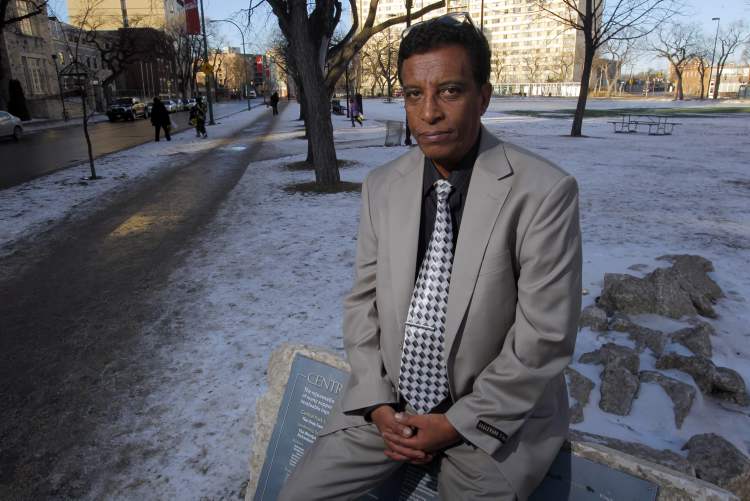 Kicking the Eritrean consul out of Canada won’t stop expats here from being shaken down for money by the long arm of the Eritrean government, say Winnipeg human rights activists.
“This is a half-hearted measure,” said Ghirmay Yeibio.
The Eritrean consul was acting on instructions from a regime notorious for human rights violations and sanctioned by the UN for supporting a terrorist organization, said Yeibio. “He’s just the messenger.”
Foreign Affairs Minister John Baird announced Wednesday Semere Ghebremariam O. Micael, consul and head of the Eritrean Consulate General in Toronto must leave Canada by June 5.
“Canada has repeatedly made clear to Eritrea to respect international sanctions and Canadian law,” a foreign affairs press release said. “The Eritrean government is welcome to propose another candidate to represent it in Canada, but that person must be prepared to play by the rules.”
If the federal government truly wants to stop the collection of funds for the regime, it should close the consulate and go after Eritrean government agents living in cities across Canada and extorting money, Yeibio said.
“They collect the two per cent tax and intimidate and divide the community instead of focusing on resettlement and helping people to get employment and healing from the wounds we endured from the regime,” said Daniel Awshek, a local nurse who volunteers helping refugees from Eritrea.
“We endure a lot of human rights violations but this adds insult to injury.”
Awshek will be demonstrating outside the Notre Dame Recreation Centre on Avenue de la Cathedrale tonight where a military band from Eritrea is expected to play.
“Many women who are sponsored and get settled here have been raped by military commanders” in Eritrea, he said, where men and women are conscripted for mandatory military service.
“They’re really damaged by the dictatorial regime,” he said.
Local community leaders are taking advantage of newcomers’ vulnerability, pressing them for money, said Awshek.
“They have a system and they play it to support a brutal dictator.”
Eritrea isn’t the brutal, despotic regime human rights groups and the UN say it is, said Lambros Kyriakakos, president of the Eritrean Community of Winnipeg Inc.
“It has been misrepresented.”
He said the Eritrean Community of Winnipeg Inc. is not responsible for collecting money for the regime — that was the duty of the consul in Toronto.
“We encourage people to be interested in development back home,” Kyriakakos said. He organized a protest outside the Free Press in 2011 when it first reported the two per cent tax was being collected from people here and sent to the regime.
Bereket Mebrahtu said he and others have been called “agents of the enemy” for criticizing the regime.
“We were outcast from the community and considered traitors,” said the vice-chairman of the Eritrean Canadian Human Rights Group
“Whenever we complain about the government, Lambros (Kyriakakos) says we are insulting the community… They’re alienating families from the community unless you pay.” carol.sanders@freepress.mb.ca