Home Business Eritrean Diplomat as an Ambassador in Ethiopia 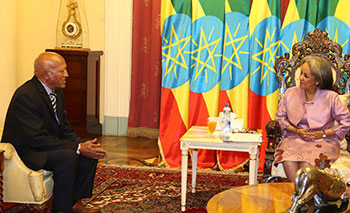 Meanwhile, at the ceremony held at the Genet Luul State House in Addis Ababa, Ambassador Semere delivered President Isaias Afwerki’s message of good will to President Sahlework and the people and Government of Ethiopia.

Indicating that he will work for strengthening and preserving the relations between Eritrea and Ethiopia, Ambassador Semere said that the new era of hopeful prospect will ensure the aspirations of peace and development of the peoples and governments of the two countries.

Sources: Office of the President and Eritrean Info Ministry