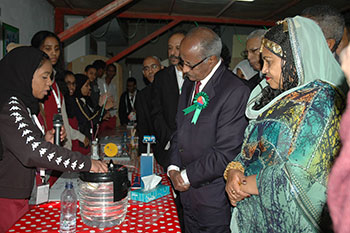 Asmara, 21 November 2019- The 22nd annual Eritrean community festival in Riyadh and its environs was officially opened on 20 November by Mr. Osman Saleh, Minster of Foreign Affairs.

The opening ceremony in which Ms. Tekea Tesfamicael, President of the NUEW took part was featured by performances depicting the culture and tradition of the Eritrean ethnic groups as well as photo exhibition of the historical and art-deco buildings of Asmara, innovation and creativity as well as entertainment programs by students of the Eritrean International School.

Indicating that festivals are forums in which the Eritrean people discuss on the objective situation in their homeland and where the noble societal cultural values are transferred to the young generation, Ms. Weini Gerezghiher, Charge d’Affairs at the Eritrean Embassy in Saudi Arabia, said that this year’s festival makes it special for it is being held at the time the Eritrean Government is initiating big development programs in congruent with the new era prevailing.

Ms. Weini also gave briefing on the investment opportunities being created that give priority to nationals and called on the nationals to take advantage of the opportunities.

The Chairman of the Eritrean community in Riyadh and its environs, Mr. Abdurahman Imam on his part said that the festival is coinciding with the commemoration of the 40th anniversary of the founding of the National Union of Eritrean women and that will add color to the event.

At the event awards were handed over to winners of various sports competitions and to students that scored high marks in the 8th and 12 grade national examinations.