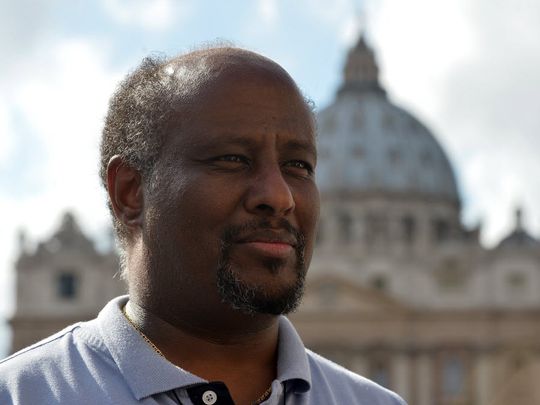 London (HAN) October 8, 2015  Public Diplomacy and Regional Security News.  A little-known priest is giving Pope Francis a run for the Nobel Peace Prize this week – and he has even been given the pontiff’s blessing. Father Mussie Zerai, a 40-year-old Catholic priest of Eritrean descent, has been nominated for his helping save the lives of thousands of migrants and refugees crossing the Mediterranean by simply answering his cell phone.They wake him in the middle of the night crying for help from flimsy boats taking on water. They dial his mobile from inside stifling cargo compartments of trucks in the Sahara desert.He takes migrants’ calls from satellite phones and then communicates GPS coordinates and basic information to Italy’s coast guard and EU naval authorities so that rescues can be launched. Kristian Berg Hapviken, the head of Oslo’s Peace Research Institute, said he had placed Pope Francis at the top of the list for 2014, but this year, with the migration crisis worsening daily, Father Zerai is now one of his favourites to win.

• Francis: the modest but radical Pope who is conscience of his era

The Pope, nominated for the Nobel Peace Prize for his focus on social justice and the environment, would likely not be disappointed by such an outcome. Father Zerai told the Telegraph in an interview on Sunday that the two met earlier this year at a conference on human trafficking and lamented harrowing survivor stories they had both heard on the Sicilian island of Lampedusa.

Pope Francis leading the opening mass for the synod of bishops on the family in St Peter’s Basilica at the Vatican  Photo: Reuters

“He told me – have courage father, keep going’,” recalls Father Zerai, who divides his time between Italy and Switzerland, where he ministers to the growing Eritrean diaspora.

It started when, in 2003, he gave his number to a journalist who needed help translating the accounts of Eritreans stuck in Libyan detention camps. His number got passed along by word of mouth between family members. Then someone scrawled it on the wall of a Libyan prison. Over the last 15 years, he has become a one-man 999 crisis call centre for the Mediterranean as his mobile number spread across the detention centres and refugee camps of North Africa. He now fields calls from as far away as Yemen and Indonesia.

Overwhelmed, he founded the mostly volunteer “Watch the Med” call centre, today staffed by several dozen multilingual volunteers. His efforts have not been appreciated by all. Some even accused him of complicity in aiding the migrants and their traffickers, Father Zerai said. The real crime, he maintains, is not to rescue someone who is pleading for help when their life is at risk.

Though German Chancellor Angela Merkel – who is hotly tipped to win the prize on Friday – is seen as the champion of the migrant cause, after opening the country’s doors to hundreds of thousands from the Middle East and Africa, Father Zerai was critical.

He believes she and other EU politicians have not done enough to improve safety and conditions for those seeking refuge.

“Angela Merkel says: “800,000 are welcome.” It gives politicians a nice image. But more concretely, how are these people arriving at your border? What violence have they suffered? Why not create an air bridge from Greece or a humanitarian corridor from Turkey or Lebanon?”

Father Zerai, who is a councillor at next month’s One Young World summit, a global forum for young leaders, said he does not expect to win the Nobel, but just by being nominated he hopes migrants have been given more of a voice in an international community that often turns a blind eye to horrors now happening on its shores.

On Sunday, Greece’s coast guard recovered the decomposed body of a baby boy washed up on the island of Kos, a major entry point into the European Union for thousands of migrants and refugees who cross the Aegean Sea from nearby Turkey.

“In the last 15 years more than 25,000 people have died in the Mediterranean. And what is Europe doing now? Erecting walls and barbed wire,” Father Zerai said. “All legal channels must be used to combat trafficking, otherwise Mare Nostrum will become one big cemetery.” Telegraph