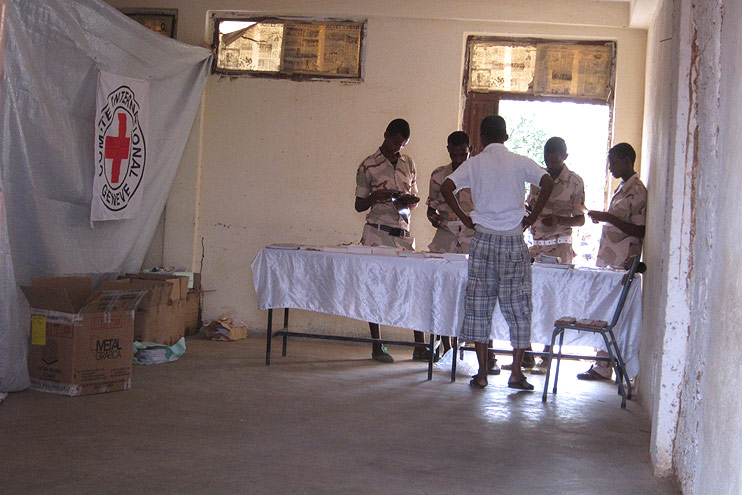 Asmara (HAN) September 3, 2014 – Community and Youth program news. The Sawa Festival is celebrated biannually at the Sawa Vocational Training Centre, together with the military graduation ceremony of new trainees. The 6th National Sawa Festival, on 17–20 July 2014, brought together some 30,000 people from home and abroad.

On the occasion of the 6th National Sawa Festival the ICRC, in cooperation with the National Union of Eritrean Youth and Students (NUEYS), held a seminar on international humanitarian law (IHL) attended by 325 representatives from political and youth organizations from across the country and the diaspora.

The seminar on international humanitarian law (IHL) was led jointly by a legal expert from the Ministry of Justice, Mr Samuel Ghebreberhan, and Mr Aron Berhane, head of communications at ICRC Asmara. It focused on the basics of IHL and the Eritrean experience of its application during the years of armed struggle. In addition, the event highlighted the ICRC’s mandate, its history in the region and its activities in Eritrea.

The seminar helped participants to comprehend that IHL aims at safeguarding the victims of armed conflict whether they are civilians, weapons-wounded or captured combatants. In addition, they learned that IHL puts limits on the means and methods of warfare so as to avoid unnecessary and excessive suffering and damage. The ICRC has been working in Eritrea since 1998. The organization’s mandate is set out in the Geneva Conventions, the main text of IHL, to which Eritrea, along with 194 other States, is party.

“It is important for Eritrean youth to increase their knowledge of IHL because they contribute or have the potential to contribute an important role in the defence system of their country,” explained Aron Berhane, adding, “Sensitizing the young with such knowledge helps to promote compliance with international law.”

Among the audience were NUEYS leaders, members of the Ministry of Information, youth and representatives and military officers of the Sawa Training Centre. Although many of the participants were not new to ICRC dissemination sessions, the seminar was the first of its kind to be held in Sawa.

The first question asked by one of the participants was: “What are the benefits of signing the Geneva Conventions?” The answer to this was: “Recognizing and respecting that IHL plays an important role in both reversing hostile environments among warring parties and promoting respect for and the dignity of human beings.”

icrc. sources: As in the two previous Sawa festivals, the ICRC, with the facilitation of NUEYS, exhibited an array of IHL publications and exchanged information with interested members of the public on topics related to IHL and the ICRC.