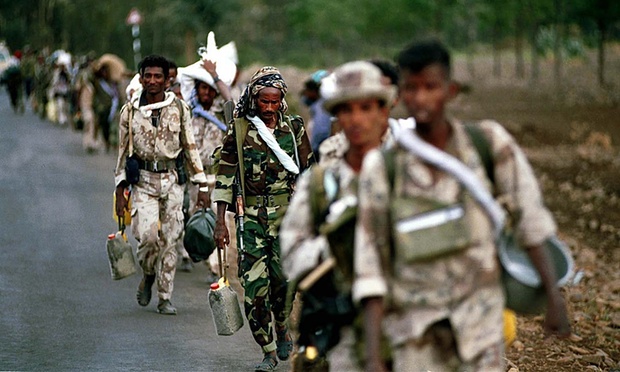 Nairobi (HAN) February 25, 2016 – Public Diplomacy and Regional Stability Initiatives News.  By Edmund Blair. Eritrea is not prepared to stop forcing its youth into lengthy stretches of work as soldiers and civil servants, a conscription policy that is driving waves of refugees to make the perilous trip across the Sahara desert and Mediterranean Sea to Europe.

European nations say that the poor Horn of Africa nation is moving only slowly and cautiously to stabilise the economy to stem the tide of migrants which is aggravating the refugee crisis that is gripping the European Union.

The Asmara government insists conscription is vital for national security saying that it fears attack by its far bigger neighbour Ethiopia with which it fought a bloody and expensive war that ended in June 2000.

On paper, citizens between the ages of 18 and 40 must complete 18 months of service to the state but diplomats and those who have fled say this can stretch to a decade or more. The government reserves the right to extend length of service in periods of emergency.

Eritrea is raising national service salaries, printing new local currency notes to deter people-traffickers and investing in mining and other sectors, but diplomats are not convinced it is doing enough to retain its young people.

Western diplomats said the strategy, boosted by a new EU financial package, showed greater engagement and openness by one of Africa’s poorest countries, which has championed “self reliance” and has long accused world powers of trying to push it into isolation with U.N. sanctions.

But the diplomats, who all spoke on condition of anonymity, accused Eritrea of back-tracking on privately made commitments by some officials last year to fix national service at 18 months, a term stipulated four years after Eritrea’s independence from Ethiopia in 1991.

European nations say that as long as national service dragged past the time limit Eritrean youths would continue to leave the country, thereby losing valuable workers that are needed to prop up the domestic economy.

Each month as many as 5,000 people flee Eritrea according to U.N. figures, estimates the Eritrean government disputes. The government puts the population at about 3.6 million, while other estimates suggest it could be almost double that.

“The government is doing the utmost that it can do, under the circumstances,” Information Minister Yemane Ghebremeskel told Reuters in Eritrea, saying salaries would rise but there were no plans to scrap or cut national service.

“Demobilisation is predicated on removal of the main threat,” Yemane said in his office overlooking Asmara.

“You are talking about prolongation of national service in response to … continued belligerence by Ethiopia,” he said referring to Eritrea’s neighbour with a population of 97 million.

Eritrea, which sits on the Red Sea coast next to one of the world’s busiest shipping lanes, won independence after decades of conflict in which the death toll for both sides was tens of thousands dead. It also fought a border war in 1998 to 2000.

It has complained that world powers failed to push Ethiopia to accept an arbitration ruling on demarcating their boundary. The government in Addis Ababa has said it wants talks on implementation, which Asmara rejects saying the ruling is clear.

Diplomats want the Eritrean government to make creating more jobs in the state-dominated economy a priority to discourage young people from fleeing, but believe the government is acting cautiously. “They are engaging more,” one Western diplomat said. “You have to build their confidence. They don’t move quickly.”

Eritreans in national service receive military training, but many move to civil service jobs after a few months, working as medical professionals, teachers, engineers or other jobs. For years, they have earned less than regular civil servants and often complain they are shunted into careers they didn’t choose.

“Some people come out after two to three years. Some serve more than 10,” said another diplomat. “That makes it difficult for the young people to plan their life. That has been one of the main reasons why Eritreans get asylum so easily in Europe.”

Rights activists have described it as “forced labour” and accuse Eritrea of other rights abuses too, including holding political prisoners, allegations the government denies.

Abel Haile, a 21-year-old who fled this month to Ethiopia, told Reuters when he was drafted into the army in 2014 an army general told conscripts they would be in the military for just one year. He left 13 months later when he saw no end in sight.

“It would mean sacrificing your whole life otherwise,” he said in Enda Aba Guna, an Ethiopian town near the border.

In Asmara, a 23-year-old who works at a ministry said she earned 500 nakfa – the equivalent of about $33 a month at the official rate but less on the black market. But she said she understood her earnings would rise under new rules.

“We are waiting. Graduates pay is higher,” she said, speaking while helping out in her family’s small grocery shop.

In a series of interviews, ministers accepted there were “push” factors like low pay driving people abroad, but mostly blamed “pull” factors enticing Eritreans away, saying migrants only needed to complain about what they said were injustices in national service to get asylum in Europe.

The EU signed a 200-million-euro package of support last month with Eritrea, a nation that has in the past turned down some foreign aid when it believed it would create dependence not development. The EU package includes energy sector support.

Most residents cannot afford the luxury of a private power supply, leaving shops in the dark as evening draws in. In rural areas, many are not connected to the national grid at all.

Finance Minister Berhane Habtemariam said new mines – one commercial mine is in operation and three more are due to start by 2018 – would boost the economy, but he said the government also wanted investment in tourism, fisheries and other areas.

He declined to give growth or other economic forecasts.

“Every time we give figures, it is used by our enemies to attack us,” he said, the kind of remark that fuels Eritrea’s reputation as a reclusive nation, a description the government vehemently disagrees with saying it is open but faces threats.

The African Development Bank estimates growth in 2015 was 2.1 percent up from 2.0 percent a year before.

The minister said he did not know how the bank reached those figures, but said growth had been in double digits about five years ago when gold mining started and prices were higher.

Berhane outlined some new national service pay scales, including for graduates who would receive 4,000 nakfa a month instead of 1,400 nakfa. Civil service pay across the board was under review and would help discourage migration, he said.

Introducing new nakfa currency notes late last year was designed to rein in a black market and hit human traffickers abroad, such as those in Sudan who took cash from migrants in nakfa and had kept the old notes, the minister said.

The new notes were issued in a six-week period – the timing of which had been kept “top secret” said one official – to ensure traffickers could not send their cash hoard back in time, leaving them holding now worthless old currency notes.

“It might not stop (human trafficking) altogether, but I am sure it is going to have an impact,” the finance minister said.

While the official rate of around 15 nakfa to the U.S. dollar has stayed fixed, the black market rate has plunged to about 20-25 from 50-55 before the new notes were circulated.

Western economic experts say floating the nafka currency would help scrub out the black market in a nation that relies heavily on remittances from Eritreans abroad. Government officials say it would simply hurt the economy.

The government has instead limited circulation of the new notes and bank withdrawals to encourage more Eritreans to use cheques and bank transfers, trying to reduce the size of the cash economy that officials say allowed illegal trade to thrive.

But this has created challenges for a country with just two commercial banks and 30 branches combined. A cash crunch has left shops and restaurants struggling to find customers, as few people have enough notes to spend on anything more than basics.

“Demand is less than it was since the new exchange system,” said Mohamed Nour, a 70-year-old clothes shopkeeper on one of Asmara’s main commercial streets. “But we must have patience.”