Home Daily Security Briefing Eritrea: Weldab tells "I don't know what happened to the rest of... 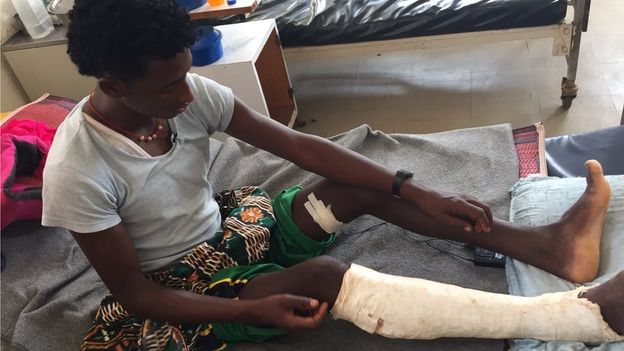 Rome (HAN) July 19, 2015 – Real-time national security updates. Eritrea is nursing serious leg wounds after being shot twice by people he says were Eritrean soldiers stationed near the border with Ethiopia.
“Even after I fell down, I could hear the bullets whizzing past me,” Weldab tells me from a clinic bed in Mai-Aini refugee camp in Ethiopia.

“I was lucky that I escaped. There were 10 of us in total; I don’t know what happened to the rest of my friends.”

This was the young man’s second attempt to leave his homeland.

He walked for most of the journey. Many of the refugees I met walked, mostly at night to avoid being detected.
Some told me they paid traffickers between $100 and $700 (£65 and £450) to show them the way.

Others said that relatives in Europe have been known to pay the traffickers directly. They would be taken by car part of the way and then shown the “safest” route by foot.

Although there is no war or famine in Eritrea, it accounts for the second largest number of asylum-seekers arriving in Europe, after Syria. Sources, AFP, HAN and BBC

Photo: BBC, Weldab was shot while trying to cross the border from Eritrea to Ethiopia