Home Eritrea Eritrea: The Homeless Eritreans in the streets of Yemen 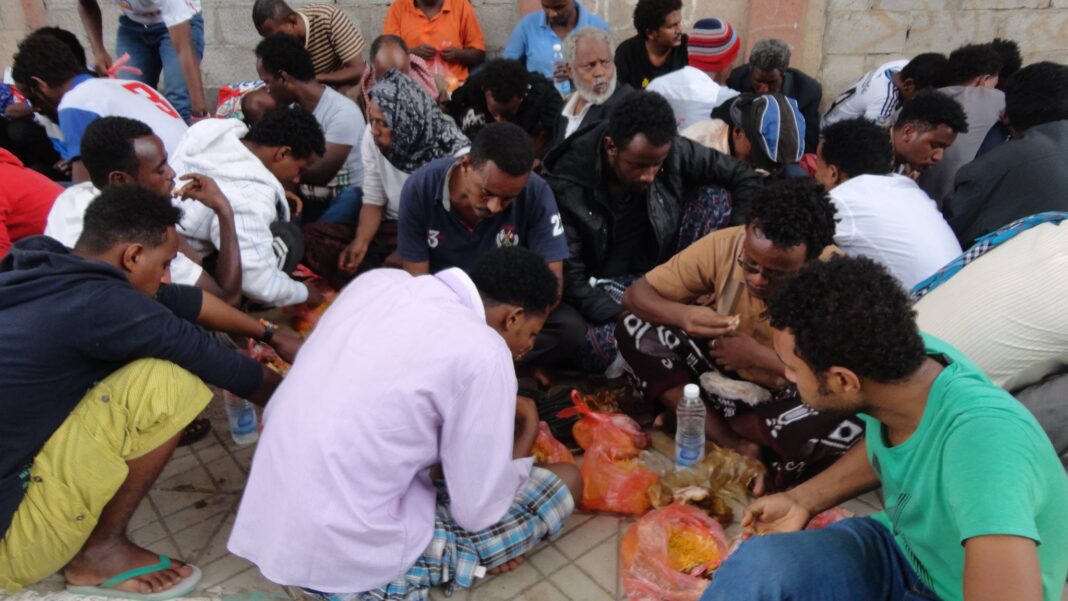 Djibouti (HAN) May 24, 2014 – According to the Eritrean Refugee voice: Geeska Afrika Online received this note with pictures from Eritrean refugees living in the streets of Sana’a, Yemen; with English error, we decided to publish online, exactly the way we received their letter. Idris Lahda  said, ‘to deliver a message to the international community, to show the suffering of Eritrean refugees  in Sana’a.’

Why hundreds of Eritrean Refugees in Sana’a Live in the Streets! Eritrea, ruled by an extremely repressive government, requires all citizens under 50 to serve in the military for years. Anyone of draft age leaving the country without permission is branded a deserter, risking five years in prison. 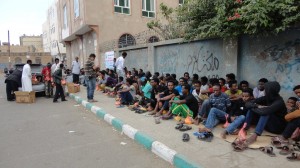 Having no shelter or a place to go to; they had to be rough sleepers, just spending the night in the open without a home. Since April 29, more than 200 Eritrean refugees -including women and children- have been living in the streets of Taiz in the capital city Sana’a after the United Nation High Commission for Refugees (UNHCR) decided to be devoid of every sense of empathy -as the Eritrean refugees put it- and abandon them and cover no longer their expenses after paying for Three months for their stay in the hotels of Sana’a as a part of providing a temporary shelter until after the completion of the resettlement procedures in a third country, but for their surprise, the Eritrean refugees found themselves ,without a prior notice, homeless. 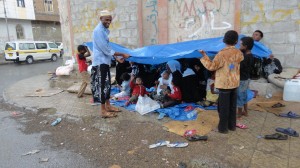 The story of (Refugees of Taiz Street) can be traced back to the year 2011, after the influx of hundreds of Eritrean refugees in the Yemeni coasts; fleeing from the suppression- as they put it – practiced by the Eritrean regime and the persecution of the security forces. The Yemeni authorities detained the Eritrean refugees in the Central Prison of Hodeida until the UNHCR considers/examines their situation and grants them a refugee status. Eritrean refugees- after years of waiting- were granted refugee status by the UNCHR and then it lodged them in hotels in Sana’a, however, they were soon informed that the UNCHR doesn’t recognize them as refugees anymore, claiming that its mission was accomplished as they got Yemeni refugee cards, and it didn’t take long for Eritrean refugees to recognize their new status as homeless.

The 216 Eritrean refugees- including women and children- claim their right of asylum, and demand to be provided with the most basic needs of a respectful life, especially that they are living now as homeless receiving no support or care. In the meanwhile, some local organizations deprecated the cruel treatment of the Commission, and appealed with sense of urgency for saving the lives of the destitute women and children who are in the Streets that don’t keep them safe from below freezing temperatures or high heats, and they can’t help but to wait for the procedures of the Commission to complete.

Head of “Ard Al Sedq Association Charitable” -Idris Lahda- said that some local organizations undertook a comprehensive assessment on the Eritrean refugees’ situation and came up with an integrated aid plan requiring immediate support to enter into force. He noted that the UN Commission and its partners have some options, such as: providing temporary shelter and livelihood opportunities, and housing Eritrean refugees in the camps located across the cities of Yemen, like other refugees in Yemen.

Lahda also explained that the “Refugees of Taiz Street” was actually an outcome of a grave legal mistake done by the Commission; it first recognized those Eritrean in Yemen as refugees, then it showed a complete turn about as it abandoned its mission and later explained that with illegal justifications. Taiz Street could witness a humane catastrophe if the Commission remains unmoved in regard to saving those helpless refugees, who left their countries fleeing from persecution to suffer another one of a different kind.

If you require any information, please contact Mr. Idris Lahda  Head of the Land honesty charity in Yemen . telephone Number: 00967737031079

Our Next Article will be: