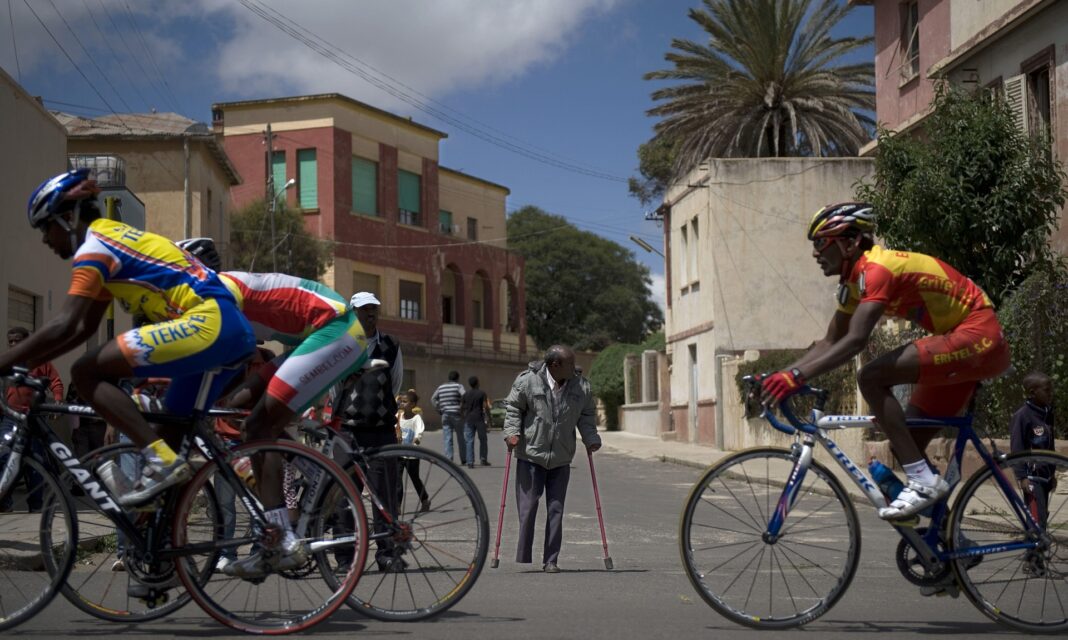 ASMARA (HAN) January 2, 2016 – Public Diplomacy and Regional Stability Initiatives News. By: David Smith  Her four brothers are top level cyclists, but when Mosana Debesay took up the sport at 14 and wanted to pursue a professional career, her father treated her differently. “He was disturbed,” the 20-year-old recalled. “He said don’t ride, have rest, concentrate on education.” The family lived in a village 13 miles outside Asmara, the cycling-mad capital of Eritrea. One day Debesay’s father went to the big city and saw, to his surprise, a women’s race. “After that he gave me permission,” Debesay smiled.

A strong sprinter, at 17 she was given a bike by the National Cycling Federation and picked for the national team to compete in South Africa, but broke her hand in a fall and was unable to travel. “I felt bad but my brother said to me if you work harder, you can win more, don’t be stressed, no problem.” Debesay bounced back to win the national women’s championship last year and retained the title in July. She said she is among 50 women taking part in competitive cycling in Eritrea, of whom six are professional, compared with about 1,000 male cyclists, of whom seven or eight are professional. “Women’s cycling will grow. The federation is supporting us.”

Debesay is seen as an ideal role model to make it happen. Anthony Fitzhenry, founder of the South African-based Qhubeka Foundation, a charity that helps provide Africans with bikes, said: “She’s inspirational, her manner and everything. She’s obviously from a family of cyclists. She’ll inspire generations of girls. One of the nice things here is they talk about ‘men’s sport’ and ‘women’s sport’. In South Africa they talk about ‘men’ and ‘ladies’: you think of ladies taking tea and scones. The media has to play a role in changing terms.”

Eritrea and neighbouring Ethiopia are at the forefront of women’s cycling in Africa. Jock Boyer, an American-born coach and former Tour de France rider who promotes cycling on the continent, said: “There’s no women’s cycling in Africa unless you go to South Africa and even then it’s fine but it’s not great. It’s hard to get races. The talent, especially in Ethiopia, is phenomenal. That’s where you see the most potential – more than here. They’re built for cycling.”

Italian colonialists introduced the first bikes to Eritrea in 1898 and cycling remains a way of life. Earlier this year, Daniel Teklehaimanot and Merhawi Kudus became the first black Africans to compete in the Tour de France. The streets of Asmara teem with bikes of varying vintage as well as an extraordinary number of cycle repair shops; a new model is way beyond the means of most citizens. Boyer added: “There are bikes still working at 50 to 60 years old. We saw one bike that’s a 100 years old with a stack of licence plates. It’s a whole mentality: we’re going to preserve something for a long time because we can’t afford to replace it.”

Eritrean cycling received a further boost last month when Qhubeka distributed 220 Chinese-made bikes to children – split evenly among boys and girls – to help ease their daily commute to school. Among the recipients at a ceremony attended by government and UN officials, and clapping, ululating mothers, was Alem Bereket, 16, who gets up at 5.30am each day for a three-hour walk to school five miles away.

“I am tired when I get there and it affects my work,” said Bereket, whose favourite subjects are English and chemistry. “It is hard for me, especially if it rains and damages my exercise books, but I have no choice. I am happy to receive a bike as it will now take me half an hour to go to school.” Bereket added that she had experience of riding and would like to turn professional one day. “I want to be in the Tour de France.” Source: theguardian