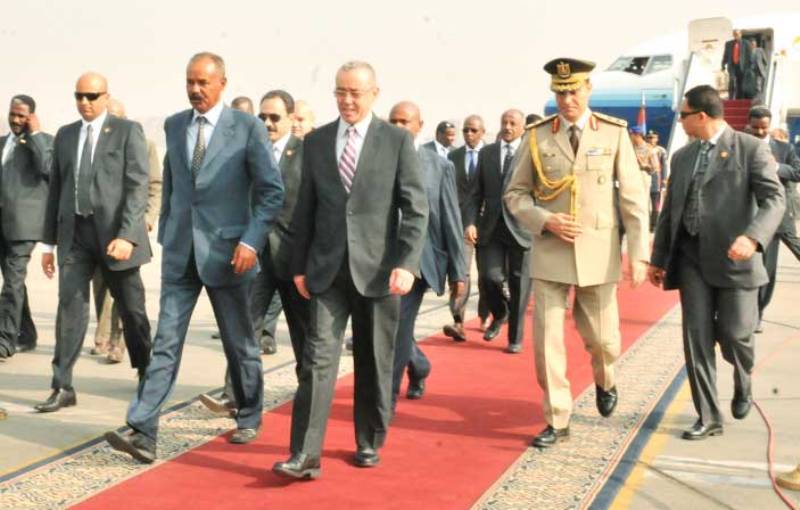 Asmara (HAN) June 11, 2014 – In Egypt, Cairo airport was on high alert as Egypt expects the arrival of a number of foreign leaders and delegations for the swearing-in ceremony this week.  President Isaias Afwerki was one of the foreign leaders and delegations attended at the sworn in ceremony of the newly elected president of the Republic of Egypt, Abdul Fatah El-Sisi.

President Isaias left for Cairo the day of the ceremony in the morning hours at an official invitation to attend at the inauguration ceremony in which leaders of different countries took part. according to the Official media of the president.

The Saudi kingdom, along with the Amir of Kuwait and the UAE, has pledged $15 billion to Egypt in aid since the ouster of former leader.

President Isaias Afwerki returned the sameday to Asmara after taking part in the swearing ceremony of Mr. Abdulfatah El-Sisi, new President of Egypt.

The President participated in the ceremony conducted in Cairo’s Palace witnessing the participation of various leaders on official invitation of the Government of Egypt.

In the course of the ceremony, President Isaias congratulated President Abdulfatah El-Sisi and the people of Egypt. He further expressed conviction that Egypt would again hold its prior position as well as role and thereby play its due role in the region, Africa as a whole and the Middle East.

A Saudi factor:  Saudi Arabian delegation arrived at Cairo airport on Friday in advance of the kingdom’s Crown Prince Salman, who is planning to attend the inauguration of Egyptian President-Elect Abdel-Fattah El-Sisi on Sunday.

Saudi Arabia has been a key supporter of Egypt since the popularly-backed ouster of Islamist president Mohamed Morsi last July. The kingdom, along with Kuwait and the UAE, has pledged $15 billion to Egypt in aid since the ouster.

However, President Isaias met and conducted discussion with a number of leaders  including Saudi Arabia and the Amir of Kuwait for regional cooperation and assistance to Eritrea.