Home frontpage Eritrea: A Quarter of a Century After Independence Eritreans Still Yearn for... 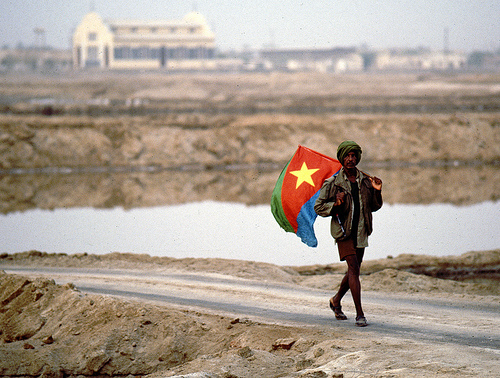 NAIROBI (HAN) May 23.2016. Public Diplomacy & Regional Security News. Eritrea marks 25 years of independence from Ethiopia this month. It is now one of the most underdeveloped countries in the world and is run by a repressive government. The Conversation Africa’s politics and society editor, Thabo Leshilo, asked Valerie Frank* to shed light on the secretive country as it marks this milestone.

Exactly 25 years ago this month the Eritrean People’s Liberation Frontmarched into Asmara, sending the Ethiopian forces they had been fighting for 30 years scrambling out of the city. There was widespread elation. The underdogs had triumphed against an army that had been bankrolled for decades by American and then Russian finance.

Two years later a referendum overwhelmingly confirmed the country’s independence. And in 1994 the popular liberation front transitioned into the People’s Front for Democracy and Justice. It has ruled ever since, turning Eritrea into one of the most isolated countries in the world and dashing its population’s hopes of freedom and development.

Eritreans now make up a significant proportion of those entering Europe on dangerous crossings from Libya. From being a country relatively undiscussed in Europe five years ago, Eritrea is now at theforefront of policymakers’ minds on how to “stem” those movements.

How did it get to this point? And what dynamics are at play in this small state with a population of 5.1 million?

Optimism about the future of Eritrea was high in the 1990s. The Liberation Front’s discipline and impressive achievements in providing services to areas under Ethiopian occupation resulted in a strong belief that Eritrea’s new government could produce similar successes. But the devastation caused by decades of fighting for liberation, compounded by conflicts with all its neighbours in the 1990s, undermined the country’s vision for progress.

The subsequent outbreak of the border conflict between Ethiopia and the now independent Eritrea in 1998 fundamentally altered the nation’s course. It wreaked further devastation in the areas affected by the fighting around the countries’ shared borders. It also entrenched Eritrea’s militarisation. Senior members of the ruling party maintain that with the border conflict as of yet still unresolved, Eritreans must remain in national and military service in case of repeat Ethiopian aggression.

This sense of constant threat has been used to legitimise the government’s restrictions on freedom of speech, association, movement and the press. With 17 journalists in jail, the country ranks among the worst in the world for press freedom.

More recently, the United Nations (UN) imposed sanctions on the country for its alleged support for Al-Shabaab and its refusal to withdraw its troops from Djibouti following an inter-state conflict. Though no recent evidence has been found to suggest Eritrea’s backing for the terrorist group, the UN appears reluctant to drop the sanctions until the Eritrean government permits UN observers to enter the country.

Restrictions on movement into and around Eritrea makes understanding conditions there extremely difficult. More foreign journalists have visited in recent years, but reports of what is going on there are largely provided by state-controlled sources. Laudable successes in reducing child mortality, improving maternal health and combating infectious diseases must therefore be viewed with caution.

Accounts of people who have fled the country suggest glaring gaps in resource provision. Potable water and food are limited and rationed. Electricity is erratic and fuel regularly runs out. The country ranks 186 out of 188 on the UN Human Development Index.

A boom in the country’s mining sector has provided one potential engine for economic growth, as has increased Chinese interest in various sectors. Money is also likely flowing to the ruling party in exchange for allowing countries – ironically including both Iran and Israel – to maintain military bases within its borders.

A loosening on import regulations and foreign exchange has boosted small-scale trading after years of heavy state control. But the private sector will remain underdeveloped if the majority of Eritrea’s workforce are employed indefinitely, unproductively and against their will by the state, as appears to be currently the case.

Young people are leaving Eritrea, at an estimated rate of 5,000 young people a month. This is driven by harsh conditions, poor pay ($10 per month) across civil and military employment, and disproportionate punishment associated with national service. This service is viewed as persecutory and as condemning individuals to a life of debilitatingservitude. Conditions have been written about extensively elsewhere.

Beyond this, young people feel smothered by the lack of opportunities and options within the country. Obtaining exit visas to study elsewhere, for example, is notoriously difficult even though further education within the country is immensely under-resourced.

Speculation also abounds that the youth’s exodus constitutes a “safety valve” for the regime. The government is unable to provide opportunities within Eritrea. Allowing a certain number to leave – and send back remittances as a vital lifeline for family and friends back home – takes pressure off the government’s national service programme and reduces the likelihood of youth agitating for change within the country.

Given this rather grim picture of conditions within Eritrea, are there any silver linings?

In the past few years, the Eritrean regime has suggested that it will reduce the duration of national service, pay conscripts more per month and draft a new constitution. A document drawn up in 1997 was never implemented. There has unfortunately been no evidence of developments on any of these fronts.

Eritrea’s modernist capital city, Asmara, is edging closer to being given UNESCO World Heritage status in recognition of its unique architectural style. This would provide money for much needed restoration work and, perhaps, put Eritrea on the tourist map.

What the future holds

If emigration from the country continues at the current scale, it is hard to imagine where Eritrea will stand in the coming years. Those leaving may provide vital remittances, which in 2006 were understood to constitute just under 40% of gross domestic product, but their exit will expose a gap in the country’s demographic profile.

Agitation for political change from those who have left appears to have achieved little. Some insurrection has been noted within the country. The most notable were the events of Forto 2013, when the country’s Ministry of Information was surrounded by disgruntled soldiers demanding political reform, and the Freedom Friday Movement, which has attempted to encourage citizens to undermine the government through small, subversive acts.

But the political system remains unchanged. It is unclear who or what will follow President Isaias Afewerki, who is 70 years old and unlikely ever to stand down.

The country’s development will remain under-realised unless there is change on two fronts. First, in the country’s leadership. Second, the impasse over the demarcation of the border with Ethiopia needs to be broken to end the excuse for Eritrea’s continuing militarisation. The international community must do more here to stick to the terms it brokered between the states in 2000.

For many of those celebrating 25 years since independence there is thus a heart-breaking truth being simultaneously acknowledged: that the respected fighters who so valiantly won them their freedom after decades in the trenches are so painfully and egregiously failing them – and the next generation – now.

*This article appears under a pseudonym to protect the identity of the author who meets the criteria required to write for The Conversation.