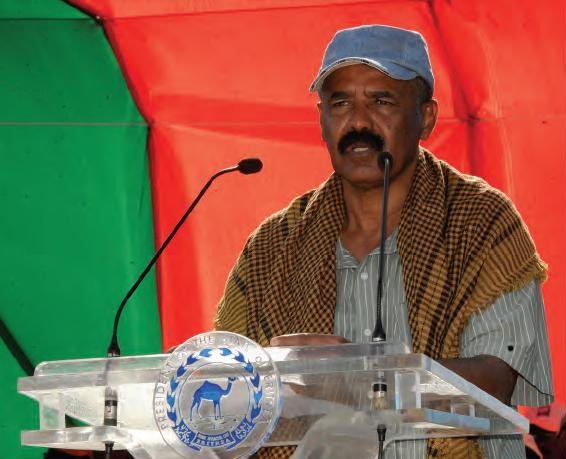 Speaking at the handing ceremony yesterday, Ms. Yasmin Tesfalidet from the NUEYS headquarters office pointed out that the Soira awardees are exemplary youths you managed to link theoretical and practical knowledge targeting creative works that would benefit the society, while those who won Sawa Award comprise a total of 150 youth nationals that are successful in their academic pursuits.

The creative works, the projects of which were handled at individual and group level, pertain to agricultural, military and other activities. The awards include monetary rewards up to 100,000 per individual.

Meanwhile, President Isaias Afewerki inaugurated a bazaar exhibition being staged as part of the activities of the 6th National Youth Festival in Sawa. The event witnessed cultural performances by Wari Cultural Troupe.

Eritrean Col. Debesai also stated that commendable efforts are being exerted, patricianly as regards the hosting of the Festival participants, and ensuring the necessary facilities have been put in place, in addition to the renovation of Haikota-Sawa and Agordat – Sawa road.

Likewise, Mr. Azazi Bereketeab, Chairman of the Coordinating Committee for the Festival, stated that a total of 4,500 youths who would take part in the event from the six Administrative regions and around 3,000 youths residing abroad would participate in the event.

Mr. Azazi further explained that the staging of cultural performances and pictorial exhibition depicting the Eritrean cultural values, as well as the prevailing harmony of the Eritrean people would feature in the course of the Festival. Moreover, the graduation ceremony of the 27th round of the National Service would add color to the Festival programs, he added.
The exhibition comprises corners depicting the role and contribution of youths in the nation-building process, as well as their diverse creativity potentials and Struggle Camp, besides a pictorial and Information Technology exhibition, among others.

The President made a tour of the camp accompanied by Ministers, regional Administrators, Army Commanders and government,as well as PFDJ officials. He also made comments, in addition to words of motivation to the youth organizers.