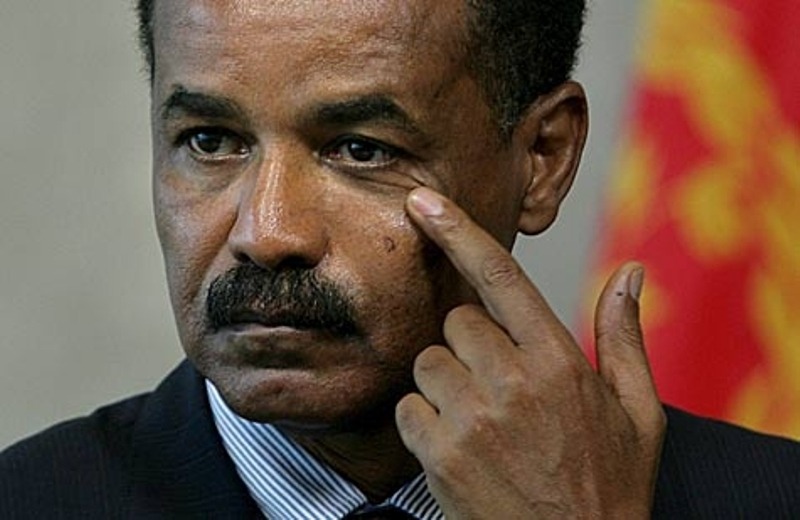 Asmara (HAN) June 4, 2014. Executive Press Release, Presidential palace. The Eritrea’s president, Isaias Afewerki, celebrated his government’s achievements in his 23rd State of the Nation address. How did  President Isaias is fare?  We need your fraternal comments after you read the State of the Nation Speech.

This was President Isaias Afewerki’s 23rd State of the Nation address and the last of his current term, according to regional diplomatic Sources. You can read his full speech here from his Official Press Release Statement sent directly to the desk of editorial board of Geeska Afrika Online.

Statement by President Isaias Afewerki’s 2014 State of the Nation Address:

The independence and sovereignty of peoples have their own distinct attributes and peculiarities. In the same token, the independence and sovereignty of the people of Eritrea has its own special flavour and significance. All the peoples of Africa possess their own distinct history, for which they take pride. But all the countries presently recognized as sovereign political entities took shape at the end of the 19th century with the advent and expansion of European colonialism.

Eritrea was seen as a gateway in the colonial scramble in northeast Africa.  The independence and sovereignty of the people of Eritrea has its own special flavour and significance. President Isaias Afewerki

In this context and for the geo-strategic exigencies of the time, Eritrea was seen as a gateway in the colonial scramble in northeast Africa. Hence it became one of the first countries that were constituted under colonial rule. It underwent a rapid socio-economic transformation until the eruption of the Second World War in the context of the prevailing schemes of colonial expansion. The history of Eritrean resistance to colonialism within the milieu of this imposed process of transformation is a narrative of civilized heroism that evokes national pride.

The geo-strategic place and importance of Eritrea and its people did not alter after the end of the Second World War in spite of profound changes in the global order. The new global order characterized by the “Cold War” should have recognized the independence and sovereignty of the Eritrean people. But they opted to put Eritrea under “protection” in order to imbue justification and pave the way for the sinister plot that they had in mind. Indeed, this was later revealed in the explicit pronouncement: “that independent Eritrea would not serve our global strategic interests.’

In the short period of “British Protection,” even the infrastructure that was essentially built to enhance colonial rule was willfully destroyed. The various political subterfuges that were conceived to obliterate Eritrean national identity are indeed fresh in our collective memories. The resistance that the people of Eritrea waged in those times was, as ever, characterized by inspiring heroism.

The new modus operandi of predatory domination during the era of the “Cold War” was not through direct colonial rule as in the preceding times. This was now carried out through proxies. The US, which was one of the superpowers in that era, thus ensured the annexation of Eritrea through surrogates who were at its beck and call in order to advance its international and regional strategies of dominance and monopoly. The crimes perpetrated to stifle through brute military force the expressed wishes of the Eritrean people for independence is too fresh in our memories to merit elaboration. The former Soviet Union too joined the fray and extended succour to the military offensives that were unleashed in the latter decades. The resistance and struggle that the Eritrean people waged during the Cold War, at the time of colonial expansion through local surrogates, was unparalleled constituting the climax of its history of struggle, heroism and national pride.

The independence that the people of Eritrea achieved in 1991 and whose 23rd Anniversary we are celebrating is but the history of the relentless struggle; of challenges and resistance for almost 100 years; against successive colonial rulers and their puppets. That is why the tone and flavour of our independence celebrations assume particular significance and are sources of immense national pride.

In the past 23 years too, and in spite of end of the Cold War and unfolding dynamic global changes, the defunct dream of domination and hegemony of the United States which pretends to be the “sole super power” has not been altered. At a time when the Eritrean people had barely attained respite with the independence of the country and embarked on nation building with earnest, new machinations were woven to foment conflict and crises in order to stifle nascent stability and economic growth and to hold them hostage. As a consequence, “conflict on territorial waters with Yemen” followed by “border conflict in Badme” were set in motion. When these two events were settled through arbitral processes, “the border dispute with Djibouti” was concocted. All these subterfuges did not mollify the appetite of those bent on domination and monopoly.

In order to prevent the Eritrean people from seeking justice and resisting the occupation of its sovereign lands and to silence its voice, a sanctions resolution was passed in 2009 under the umbrella of the UN Security Council. This was another manifestation in the chain of predatory and unwarranted hostility. This is in addition to intense and unremitting acts of subversion comprising of military, political, diplomatic, economic as well as human-trafficking ploys that are accompanied by psychological warfare. The central aim of these concerted hostile acts is to weaken all the endowments of the Eritrean people and vanquish its resistance.

The resistance of the Eritrean people has not succumbed to these machinations in the face of the declared war for almost 20 years now. On the contrary, it has been consolidated and reinforced. Indeed, all these machinations have increasingly been exposed and are dissipating with time. This has, in turn, induced further frustration in the architects of adversity and hostility. The frantic vilification campaigns that are woven daily and the vain sabre rattling epitomize these frustrations. The heroic and emboldening resistance the Eritrea people have carried out in the last twenty years is thus part and parcel of 100 years of history of unparalleled resilience and resolve.

Against this backdrop of the history of resistance of the Eritrean people for liberation, dignity and sovereignty, we have strived, in the past twenty years, to pursue the task of nation building within the desired framework and identified priorities without being derailed or becoming hostage to all the hostilities and provocations and without slacking our efforts for the liberation of our sovereign territories.

The real meaning of liberation and independence is its translation to sustainable progress and the improvement in the quality of life and people’s living standards. This can only be secured through relentless developmental endeavours. Hence, the priority of our priorities is to lay robust foundations for the rehabilitation and growth of the devastated economy. This does not, and should not, constitute of white-elephant or pompous projects that are implemented for propaganda or public relation stints.

The serious developmental projects and programmes we pursue must ensure sustainable growth. They must be characterized by extensive and equitable spatial outreach; and, uphold citizenship equality rights while not creating imbalances of access and opportunity. The pillars of this developmental drive are agriculture, manufacturing and services. That the progress we have achieved in laying the robust foundations for a sustainable economic order is substantial and that it is growing, sector by sector, with time in terms of quantity, quality and capacity can be gauged easily by the facts on the ground. That its pace and momentum will increase is also evident. Indeed, this is why we are witnessing a surge in frantic hostilities in a futile bid to stem its progress.

The enhancement of human capital is decisive, in addition to other endowments, for ensuring sustainable developmental growth. In this context, it is imperative to strengthen and bolster slackening discipline as well as educational and professional training to ensure the requisite acquisition of knowledge, technical expertise and work experiences. This is an urgent and timely task that requires focused attention.

Within the framework of our tasks of nation building, the political infrastructure assumes a vital role as a vehicle to advance our overall objectives. We have gleaned important lessons and experiences from the hostile external schemes aimed at derailing our nation-building endeavours and processes. A constitution drafting process will be launched in order to chart out the political road map for the future governmental structure.

I would like to express my deep appreciation for the Eritrean people who made independence a reality through relentless struggle, sacrifice, and by overcoming all hurdles; to the people of Eritrea who are now engaged in the nation-building process day and night in a spirit of patriotic devotion to the homeland; including mothers who are immersed in hard developmental work while carrying their infants on their backs,; and to the members of the Defense Forces.

Glory to our Martyrs! Victory to the Masses!