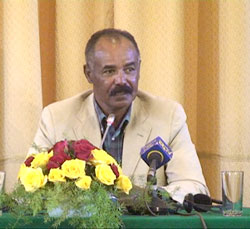 Asmara (HAN) February 25, 2015 – Public Diplomacy and Regional political news. In an interactive diplomatic session held in Asmara with the heads of African Trade Unions and representatives of a number of International Trade Unions, President Isaias Afwerki called on the workers and their associations to enhance role aimed at ensuring the sovereignty and development of African countries.

President Isaias further said that currently the African and International trade unions have been in decline due to policy of domination of the super powers, and that trade associations should strengthen their organization in order to bring about positive changes that benefit workers.

During the interactive session the heads of African Trade Unions and representatives of the International unions expressed resolve to strengthen unity and struggle to overcome the challenges they are facing.

At the occasion Mr. Francis Atwoli, President of OATUU, explained the objectives of the OATUU, and that the 11 points presented by the Government of Eritrea sighting the objective situation of workers and the solutions for the challenges they are facing would greatly help for strengthening the African workers movement.