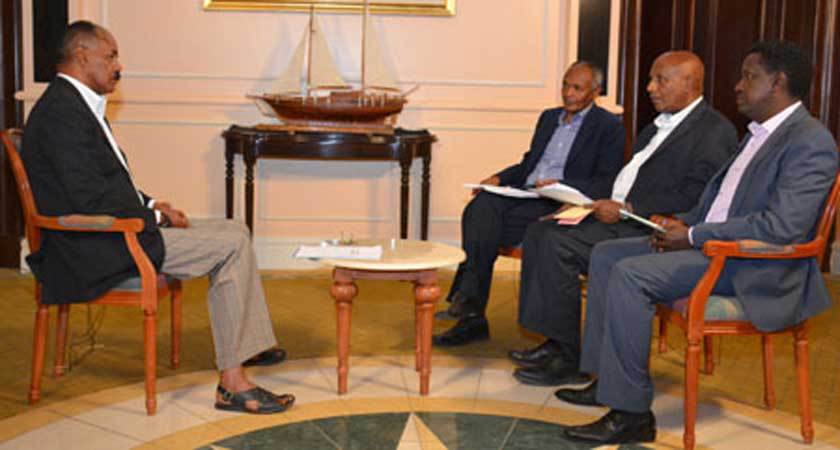 Asmara-Eritrea’s local media conducted an extensive interview with President Isaias Afwerki yesterday mainly focusing on projected public development programmes for this year and other issues of importance to the domestic audience.

The two-hour long interview was broadcast live on Eri-Tv and Dimtsi Hafash radio station.  In the interview, President Isaias explained in detail projects near completion or that are in the pipeline in the prioritized infrastructural sectors of energy, water, transport and communications as well as in the social sectors of education and health.  President Isaias also elaborated on monetary measures taken and progress achieved to-date to ensure macro-economic stability, the salary increment that the GOE has partially introduced in Civil Service, and, urban housing challenges..

Provision of adequate and reliable power supply for domestic, industrial and agricultural consumptions constitutes GOE priority both in terms of its overall impact for investment and to ameliorate the quality of life, President Isaias explained.  The Hirgigho power plant that was built in the middle of the 1990s has been grappling with a variety of maintenance and functionality problems resulting in frequent power outages in recent years.  For 2017, concrete programmes that will be implemented in this sector include installation of 180 Mega Watt power generations plant that use fossil fuel (gas and solar energy respectively.

In terms of water supply, President Isaias underlined that the GOE has been channeling substantial investment for the construction of dams in all three development zones in the country in the past two years.  The Gahtelai dam in the Eastern Development Zone, is slated for completion in 2017.  The aggregate  volume of water harvested in these dams so far reaches around 250  million cubic and will probably amount to around 300 million cubic meters towards the end of the year taking the infrastructural works underway into account.

In transport, government priorities for this year will be focused on addressing the challenges and paucity of air and sea transport facilities that the country is facing.  Road transport maintenance and ensuring increased access to affordable transport to the public will remain areas of government priority, President Isaias stated.

Human capital development has always remained a crucial objective of government intervention in the past years.  In this respect, the GOE will continue to funnel substantial investment in education and health to ensure equity, greater access and better services to the public.

President Isaias also explained the rationale behind the phased salary increments to the Civil Service.  The overriding objective was to ensure priority in the first phase to those at the lowest rung in the army and the Civil Service (new entrants from the Institutions of Higher Education) while documentation that must take into account seniority, job complexity and other vital parameters are worked out for the subsequent phases.

The Interview will continue today at the same hour.