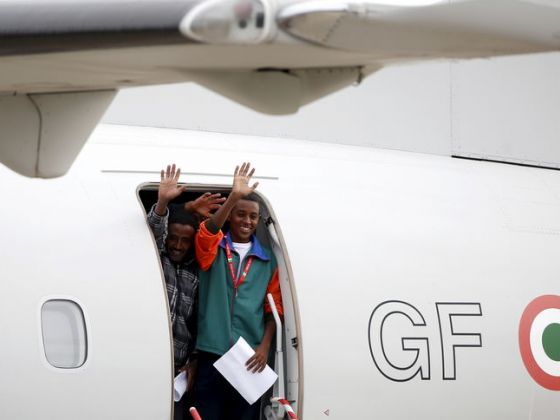 The 19 Eritreans, who had arrived on the Italian island of Lampedusa, were bound for Lulea, in the far north of Sweden just south of the Arctic Circle. The Swedish immigration agency said they have a chance of being granted asylum. Eritrea, an authoritarian northeast African country, is one of the major origins of people who have been trying to cross the Mediterranean Sea to Europe.

The Eritreans, 14 men and five women ages 25 to 40, represent the first of 160,000 people expected to be resettled throughout Europe as part of the EU’s new redistribution program. They smiled and waved as they climbed up the stairs to the aircraft as officials from the U.N. refugee agency and Red Cross waved and bid them farewell from the tarmac.

Italian Interior Minister Angelino Alfano said that upward of 100 more refugees from Italian centers would be resettled in Germany, the Netherlands and elsewhere in the coming weeks.

Alfano was joined by EU migration commissioner Dimitris Avramopoulos and Luxembourg’s foreign minister at a farewell ceremony at Ciampino. Later in the day, they were to travel to the tiny island of Lampedusa, ground zero for Europe’s migration crisis, where the first “hotspot” is to open to identify would-be asylum-seekers.

The hotspots are to be set up in Italy and Greece, where most of the tens of thousands of people trying to make their way to new lives in Europe first land after often-dangerous boat trips across the Mediterranean from Libya and Turkey. They are intended to establish whether people are fleeing conflict or violence and have the right to asylum or some other form of protection, or whether they have come to Europe in search of jobs and better lives.

The Eritreans will arrive at Lulea’s Kallax airport, where they will be met by staff from Sweden’s immigration agency. After registering and staying a couple a few days, they’re likely to be assigned to refugee housing in the Ostersund area.

Alfano praised the flight as a historic day for Europe, showing that it had changed its migration policy. He said it showed that the EU could welcome legitimate refugees, crack down on smugglers and send home economic migrants who do not need international protection.

“Today is a day of victory,” Alfano declared.

Italy for years has demanded Europe shoulder more of the burden of the continent’s refugee crisis. Even though most migrants prefer to pass through Italy en route to destinations further north, Alfano has been keen to show off the first flight to try to quiet anti-immigrant critics at home.-ABC