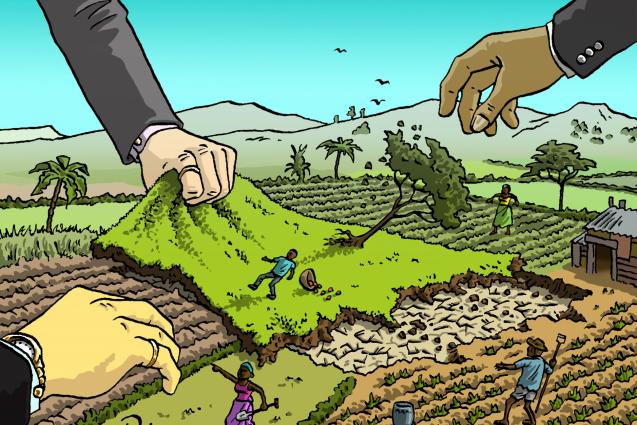 I recently wrote an article for Eritrea Profile on December 28th, 2016, on the issue of land grabbing, discussing whether or not this phenomena could occur in Eritrea versus the current trend happening in most of Africa and also in Asia. Upon publication of the article, I came across several comments on various websites on this issue of land grabbing and, for that reason, I just decided to elaborate a little more on the question of land tenure in Eritrea so as to give a broader understanding on why such land grabbing, at the expense of the people and mostly food security, could not be possible on Eritrean soil in comparison to other African states. In doing so, this article will give a glimpse at some historical customs and their strengths in terms of land ownership in the country. We will see how colonization, land expropriation and wars hindered traditional land ownership system in Eritrea which will give us an understanding of why modern land-grabbing days likely won’t occur in the country.

Indeed, understanding the causality of such phenomena on African soil mainly takes us back to the time of colonization where lands were expropriated from local communities as well as the establishment of local power at the expense of others, subsequently, creating clans and divisions among the colonized peoples.

As I suggested in my previous paper, land-grabbing in modern day Eritrea won’t be possible. Looking back at history, however, Eritrea was not a unique case in that the land was expropriated by foreign powers, invaders or traders such as the Greeks, Ottoman Empire, the Egyptians, followed by European colonialism with the settlement of the Italians prior to the British protectorate, and then Ethiopia’s forced annexation.

As Steven Lawry (2016) summarized effectively, the importance of land for the African continent in his research entitled The Impact of Land Property Rights Interventions, “Land and natural resources lie at the heart of social, political, and economic life in much of rural Africa. They represent fundamental assets—primary sources of livelihood, nutrition, income, wealth, and employment for African communities—and are a basis for security, status, social identity, and political relations. For many rural people, land and resources such as water, trees, and wildlife also have significant historical, cultural, and spiritual significance.”

Lawry’s words reflect the symbol of land to Eritreans and as I stressed in my previous article, Eritreans have an emotional and historical attachment to their land and its preservation. Hence, this attachment to the ancestral land takes us back to centuries where different local kingdoms, local authorities and customs were formed over time. Let’s look briefly at the context of Eritrea’s customs in terms of land tenure.

Some ethnic groups had local authority based on the election of a council of elders such as the Saho ethnic group. While some had a system of caste between serf and master such as the Tigre, or a system of Enda in the highlands mostly populated by the Tigrigna. The Kunama and Nara societies, on their parts, were not divided into serfs and masters but, on the contrary, matters were decided by discussion while land was owned collectively. Various customary laws existed prior European so-called ‘civilization of Africa’.

The enda land tenure system has been influential and was initially made up of a number of families or kinship groups sharing the same ancestor. The members of the enda would receive land, which was provided to the family permanently. Specific plots of land were called risti or meriet risti, which is defined as “land that is inherited from one’s forefathers’ and currently under one’s possession” (Woldegiorgis, 2015:4).

Within the risti system, it was possible to shift from collective to individual ownership (known as tselmi) and was seen as a fundamental right within the social construction by featuring three key aspects. Regarding these aspects, Woldegiorgis (2015) explained that they hard to do with “their relative absoluteness, their hereditary nature and their derivation from the historical right of a first possession by someone’s remote ancestors”.

Meriet worqi (land of gold), another type of risti system, consisted of a land bought from an owner for money and wasn’t claimed by any enda. Democratically elected elders lead the endas and their duties consisted of collecting taxes and working as judges. With the expansion of the community, the endas became larger and transformed into villages by joining endas together. Following this transformation, the system of enda land tenure system saw the emergence of a diesa system and became a collective land ownership.

This customary law of land distribution was clearly and meticulously decided in regards to the level of fertility of the land and ensuring equitable share of the quality of the land among the villagers. Accordingly, the land was measured between “most fertile, medium quality and poor quality” (Woldegiorgis, 2015:5).

Within the diesa system, which became the most common system of land ownership, the land was under the village, owned collectively with inhabitants receiving their shares. The land was under the supervision of an elected village chief. Districts then appeared where district chiefs were also elected. Following these, a system of gulti came into play, which was land granted by a ruler and given for specific duties or services and was more of a feudal system of administration of land by royal powers.

The traditional land system was an obstacle to Italian colonizers and as such, from 1893-1941, the colonizer imposed a land policy, giving them rights to seize Eritrea’s most fertile lands. Without doubt, this decree led to rebellions such as the one waged by Bahta Hagos but did not stop this legislation to turn Eritrea’s land into a “Terra Demaniale” or a “Crown Land” and strengthened in 1909 with the establishment of a second land policy authorizing the designation of territory in the highlands and lowlands as state property.

The Italian colonizers’ purpose was to make Eritrea viable and attractive for the emigration of their own citizens. As such, the country must be stable and economically viable to attract Italians to settle. Quickly, industries, agricultural production boomed in Eritrea making it the second most industrialized colony in Africa at that time (with South Africa being first). Without doubt, the exploitation of Eritrean land was not shared by the locals. Even worse, some lands were expropriated from local peasants. Degiyat Bahta Hagos, Abubaker Ahmed, Mohammed Nuri were among those who fought against this expropriation where local inhabitants, who once owned land, became tenants of that same land.

Similarly, under the British protectorate and Ethiopian domination, state land ownership continued at the expense of the Eritrean people. With the coup by Mengistu and its Derg regime in 1974, a new land tenure decree came into play by confiscating lands from churches and aristocrats in the names of the peasants. However, the Derg regime’s land policy was fraught with corruption, heavy taxes, and favoritism. Clearly, one can notice that throughout history of Eritrea, the question of land has always been matters of battle while customary land tenure systems kept being completely passed over by foreign powers.

Thus, land-grabbing, at that time, was continually fought by local populations and it became more prominent during the armed struggle. In fact, the EPLF introduced land reform in liberated zones intended to create a more equitable distribution of land. Subsequently, by the late 1980s, a large majority of land reform took into account the diesa system in an improved version of it by including the rights of women to land ownership.

At independence, with the growing population and the degradation of the land caused by decades of wars, the question of the land was at the center of discussion by policymakers and a top development concern. This priority was quickly put into practice with the implementation of the Land Law and its proclamations (No. 58/1994 and No. 31/1997) aiming at reforming the land tenure system, land productivity, conservation and food security. For instance, the new Land Law gives equal rights to all citizens to diesa land and in terms of “leaseholds for housing, commercial and other social services; the lease period may vary from 10-60 years” (Proclamation No.58/1994).

After years and years of lessons learned in terms of land ownership, expropriation or the modern term of ‘grabbing’ has been at the expense of the people. Hence, after decades of struggle, the question of land and its symbol to Eritrea cannot be denied. Henceforth, the Land Department of the Ministry of Land, Water and Environment (MLWE) has the heavy duty of ensuring the “implementation of sustainable land management and guarantee optimum use and fair distribution of land” (MLWE).

As such, the current trend of land-grabbing, a new type of colonialism, that African people are victims of, is unlikely to happen in today’s Eritrea after such long battles and wars to re-appropriate rights to land. The combination of customary land tenure such as the diesa system combined with the need of a land management system to ensure agriculture, food security and protecting of the environment are top priorities and paths to sustainable development of the country.