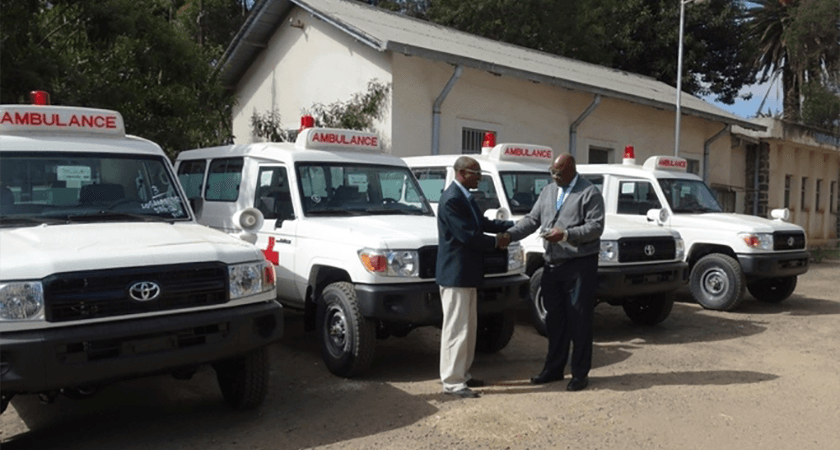 UNFPA Eritrea plays an important role in the Eritrean government’s endeavor to reduce maternal mortality and morbidity. Eritrea achieved the health-related MDGs and it is one of the few African countries that achieved MDG 5a.

Maternal mortality was reduced from 1700 deaths per 100,000 live births in 1990 to 380 per 100,000 in 2013. However, this figure is still unacceptably high when compared with the global target of 210 per 100,000. Skilled birth attendance is low, at 34 per cent (EPHS, 2010), thus UNFPA has been supporting the Ministry of Health to strengthen basic and comprehensive Emergency Obstetric and Neonatal Care Services.

As a continuation of the support that UNFPA provides to the Ministry of Health, the Eritrea Country Office handed over four ambulances in January 2016. Since the start of the 4th Country Programme (2013-2016), UNFPA has provided about 12 ambulances.

The ambulances will be used to transport pregnant women to health facilities.
© UNFPA Eritrea

The provision of ambulances could be influential in increasing the percentage of births attended by skilled health professionals and thereby decreasing maternal mortality and morbidity. These ambulances are expected to facilitate the transportation of pregnant women to health facilities, especially in the hard-to-reach areas, which makes a significant contribution to solving the transportation problem of expectant mothers, especially those who live in remote areas.

At the handing over ceremony, the Representative for UNFPA Eritrea, Dan Odallo, said UNFPA is committed to supporting the Ministry of Health in its efforts to improve maternal and neonatal health care services and the ambulances are a continuation of the support.

Yemane Teadel, the Administration and Finance Director-General of the Ministry of Health, said the support will contribute significantly to improving access to health care facilities, particularly for pregnant women.